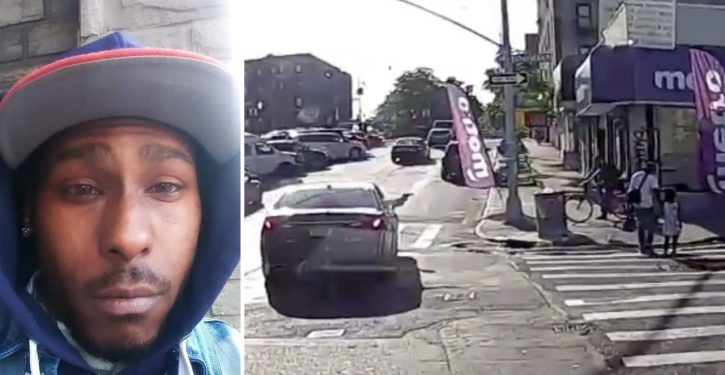 You want to keep telling us that the problem that plagues blacks in the inner city is police brutality? Try telling that to the 6-year-old daughter of Anthony Robinson of Brooklyn. He was holding his little girl’s hand as the two crossed a street in the Bronx when a car pulled up to them. Shots fired from front passenger seat dropped the 29-year-old Robinson, who died of his injuries. The child, for her part, ran up the block in horror. No doubt this traumatic scene will play over and over in her mind for the remainder of her life.

On Sunday, July 5th, police officers from the 44th Precinct responded to a 911 call for a male shot at Sheridan Avenue and East 170th Street. pic.twitter.com/kiEmmJfuEW

The incident took place in one of the boroughs of New York City, whose mayor, Bill de Blasio, announced last week that he plans to cut $1 billion from the NYPD’s $6 billion budget. He added that he could not guarantee that the department’s head count wouldn’t shrink, but no matter: Shootings in the Big Apple have already more than doubled since de Blasio disbanded the department’s plainclothes anti-crime unit in late June.

New York City is not the only Democratic-run city to experience an uptick in gun deaths since the death of George Floyd. An 8-year-old girl was shot to death in Atlanta over the weekend as she rode in a car. The shooting occurred near the site of the burnt-out Wendy’s where Rayshard Brooks died. A second deadly shooting took place at the same location within a 24-hour period.

As for the murder of Anthony Robinson, no arrests have been made yet. The NYPD is offering up to $10,000 for information leading to an arrest, but don’t hold your breath. Since the cuts began, morale in the department, which has never been great since de Blasio became mayor, dropped precipitously following the cuts, with 272 uniformed NYPD cops filing for retirement.

How are Dem candidates who support Ocasio-Cortez’s Green New Deal faring in the primaries?
Next Post
‘Historian’ claims ‘history is as much about forgetting as remembering.’ Really?