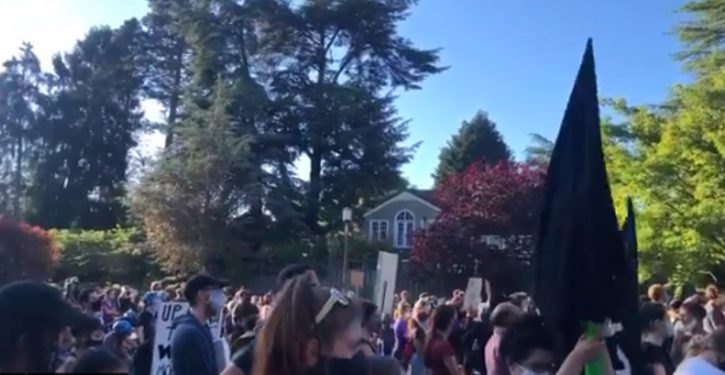 Protesters mass outside the home of Seattle Mayor Jenny Durkan, who hasn't been accommodating enough on the BLM/Antifa demands of CHOP. Video via Twitter, @Shauna_Sowersby

Seattle Mayor Jenny Durkan was initially very supportive of the “autonomous zone” declared by BLM and Antifa in the Capitol Hill area of the city after they drove police out of the local precinct.  Answering media questions on it in early June, Durkan suggested that the zone, originally called CHAZ (Capitol Hill Autonomous Zone), might result in a “summer of love.”

The name was changed within days to “Capitol Hill Occupied Protest,” and conditions have continued to deteriorate.  There were four shootings in CHOP in the last 10 days.  Two resulted in homicides on June 20 and 21, and a third on Monday, when a black teen of 16 was shot to death, and another 14-year-old injured.  (As Howard Portnoy noted on Tuesday, the Seattle City Council is managing to blame the murders on “capitalism.”)

After the first two murders (it seemed to take two), to which police and EMTs were unable to respond, Durkan decided to have CHOP dismantled.  So far that doesn’t appear to be going very well.

That may be because Durkan’s proposal on dismantling the zone seems to be a compromise position.  On Friday, city workers showed up with equipment to begin removing barricades and other “infrastructure” set up by the occupiers.  The occupiers blocked the workers and their equipment, so “the head of SDOT agreed to provide a ‘formal letter’ to the camp explaining the day’s planned actions to clear art and barriers from the right of way and begin the clean-up of Cal Anderson Park.”

The ineffectiveness of the initial effort on Friday may just possibly be explained by this detail: “Police presence around the clearance work outside the emptied East Precinct was minimal. One officer on the scene said he was there as an ‘observer.’”

Durkan then held a “marathon meeting” with CHOP occupiers on Friday, which “produced a lengthy airing of grievances and debate over a Sunday morning deadline.”

Durkan had given the Sunday morning deadline, but it seems she doesn’t plan to reclaim the zone entirely.  According to the Capitol Hill Seattle Blog:

Nobody from the mayor’s office spoke to media after the more than three hour session but those who attended said the mayor was clear — the protest campers can stay outside the East Precinct and the large cement barriers that protect that camping area can stay but the other streets around the Capitol Hill protest zone must be clear of barriers by Sunday morning.

To be clear: the occupiers get to remain in the area of the police precinct building.  It’s not clear what that means for the future of police operations in Capitol Hill.

On Sunday, “protesters” sympathetic to CHOP showed up at Durkan’s home.  Her follow-up statement indicates Durkan (although she wasn’t at home at the time) wasn’t much in the mood for another marathon meeting.  Indeed, she was peeved that they would protest at her home, “without regard for the safety of the Mayor and her family.” (H/t: The Blaze)

Seattle City Council member Kshama Sawant, a frequent participant in the protests, addressed a demonstration in a nearby park and then marched with the group to the mayor’s home, where the angry agitators announced their grievances and demands.

Mayor Durkan put out a statement afterward calling out Sawant, and complaining that “Mayor Durkan and her family are in the state program to keep their address confidential because of the death threats mostly related to her work as Seattle’s U.S. Attorney under President Obama.  Instead of working to make true change, Councilmember Sawant continues to choose political stunts.  Tonight she did so without regard for the safety of the Mayor and her family. The Mayor was not even home – she was working at City Hall.  Seattle can and should peacefully demonstrate but should not put families and children at risk.”

Now Durkan is asking the city council to remove Sawant for “disorderly or otherwise contemptuous behavior.”

Jenny Durkan is asking city council to remove Kshama Sawant from office because of her roles in the protests against Durkan and her violent police force. The change in posture from the city and police department in the past few days has been noticeable. They're out for revenge. pic.twitter.com/VXiBP9dxjJ

On Tuesday, Seattle DOT finally managed to remove some of the CHOP barricades.  Others are still in place.  The city has offered no timeline for when the police may move back in.  Local media continue to assure viewers that the “protest” has been “mostly peaceful.”

In the still-undismantled CHOP, the residents and business owners of Capitol Hill, who have been subjected to property damage and extortion and have not had police support since June 8, may wonder if their name has been changed to “Chopped Liver.”