Former Vice President Joe Biden held his first press conference with reporters in nearly three months but faced no questions about recent revelations about his interest in Michael Flynn during the presidential transition period in early 2017.

Last week, attorneys for Flynn disclosed notes taken in early January 2017 that suggested that Biden brought up an obscure law called the Logan Act that the FBI cited to continue an investigation against Flynn.

Last month, Senate Republicans released documents showing that Biden submitted a request for an intelligence report regarding Flynn on Jan. 12, 2017.

Comey briefed the White House on a phone conversation that Flynn had on Dec. 29, 2016 with Sergey Kislyak, who then served as the Russian ambassador to the United States. The FBI recorded the conversation during routine surveillance of Kislyak.

The FBI by that point was poised to close an ongoing investigation into whether Flynn had covert links to Russia. But Strzok and other FBI officials intervened on Jan. 4, 2017 to keep the investigation open. They cited Flynn’s call with Kislyak, and raised the prospect that Flynn violated the Logan Act.

Passed in 1799, the law has never been successfully prosecuted in U.S. history.

According to the notes, Strzok jotted down the line, “VP: Logan Act.” Flynn’s lawyers said that the scribbling suggested that Biden brought up the law, which prohibits private U.S. citizens from negotiating with foreign governments regarding U.S. government policy.

Flynn ultimately pleaded guilty to making false statements to the FBI during a Jan. 24, 2017 interview with Strzok at the White House. But the Justice Department filed a motion to dismiss the charges on May 7, citing new evidence in Flynn’s case. Flynn had retracted his admission to making false statements on Jan. 29, saying that he regretted entering a plea deal with the government.

Biden fielded questions from national and local reporters following a press conference on Tuesday in Wilmington, Del. He was asked about his response to the coronavirus pandemic, the destruction of statues and monuments in the wake of the George Floyd protests, and reports that Russian intelligence paid bounties to Taliban fighters to target American troops in Afghanistan.

In an interview last month, Biden downplayed his role in any investigation of Flynn.

“I was aware that they asked for an investigation, but that’s all I know about it,” Biden told ABC’s George Stephanopoulos in a May 12 interview.

He has not been directly asked about the Strzok notes.

“Neither Vice President Biden nor anyone else in the White House ever advocated for a criminal investigation of Michael Flynn for violating the Logan Act,” Biden campaign spokesman Andrew Bates told The Washington Post’s fact checker, Glenn Kessler, last week.

Bates’ statement did not address why Biden might have brought up the Logan Act.

Half-masked: Pelosi fails to practice what she preaches on COVID safety
Next Post
Cartoon of the Day: Anti-Independence Day 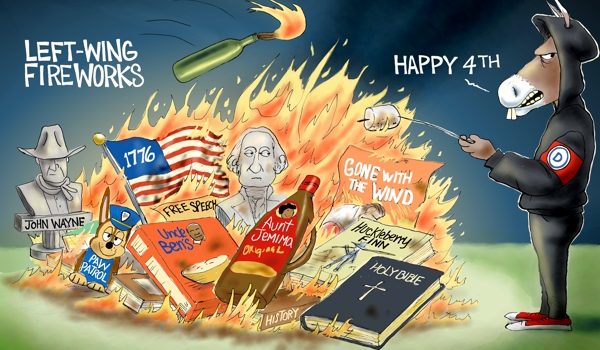