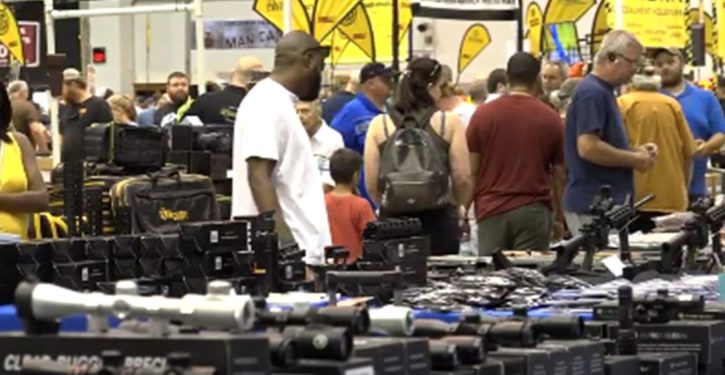 This is a little data point that reminds us of the implications from disrupting social order.

CNSNews, citing the National Shooting Sports Foundation (NSSF), reports that requests for gun permits in Illinois have jumped by 501% over last year.  And gun sales have skyrocketed as well.

It’s no surprise that the most rapid increase has been since the massed, violent attacks in Chicago began at the end of May.  But the increase in permit requests and sales began with the coronavirus lockdown in March.  As most of us are old enough to remember, that could be at least partly because gun dealerships were being deemed “non-essential” businesses in many states, and citizens were hastening to make their gun purchases before lockdowns took effect.

However, Illinois was a state that listed gun dealers as essential businesses and allowed them to remain open.  That, of course, facilitated the exceptional increase in gun sales.  It’s the rest of the story that we can take a timely reminder from.

As the Washington Free Beacon noted at the time, first-time gun owners were heavily represented in the gun-sales increase across the country.  Some obvious reasons for that were the vows of state and local authorities to let hundreds — in some places thousands — of inmates out of jails and prisons, theoretically to protect them from transmission of the virus.

But the vast majority of people in Illinois, as elsewhere, were unlikely to ever come in contact with the released inmates.  Those inmates, to be sure, have gone on in places across America to promptly commit new felonies, including murder and assault.  But most people would still be justified in calculating the odds of encountering them personally as not much increased.

Yet millions of people felt themselves to be at significantly greater risk – because of the lockdown.  I.e., weeks before the violent attacks began.  The mindset seemingly at work here is more comparable, in my view, to the “broken windows” mindset than it is attributable to specific logical deductions about crimes and likelihood.  Conditions are materially changed when the streets are emptied by decree, the normal activity of a swirling, swarming populace ceases, and rules are so much in flux that householders can’t count on how the police will be occupied or will respond.  (I know, for example, that I have not seen a police patrol car on my street once since February.  In my completely residential area we didn’t see squad cars often, but I’ve typically seen one in the neighborhood about once a month since I’ve lived here.  Since February, not even one.  I’ve chalked this up to the police being more busy than usual with vandalism and looting against locked up businesses, which the local police blotter indicates is the case.)

People started feeling themselves out of pattern and unprotected by normality in March, if not before.  Some of that may also have been due to skepticism about the government measures being imposed to combat the virus.  But again, I don’t think it was as much about drawing explicit conclusions (e.g., it wasn’t about the false allegations that “Trump followers” all thought the virus was a “hoax”) as it was about the frequently-changing public announcements and the stunning scope of what state and local authorities were determined to do.  That’s a larger condition, not a specific motive, making the people uneasy.  Major bridges of trust between government and people have been burned in the coronavirus lockdown.

And one of the most marked, indisputable reactions of the people was to arm up.  You can cook polls and surveys, and they come with inherent error factors anyway.  But gun sales (and permit requests, where they apply) are just numbers, requiring no curing or correction.

A lot of people in Illinois have voted stupidly for decades.  But since the coronavirus lockdown, a lot of people in Illinois have suddenly decided they need to get armed.  They’re behaving in the American tradition, as opposed to the putative lab-rat model by which some observers are predicting that voters will run screaming away from Trump in November.  The thinking seems to be that Americans overwhelmingly agree with the media: everything that’s terrible is Trump’s fault.  Americans, according to this hypothesis, are reacting “logically” to stimuli, believing the media narrative that everything is comprehensively beyond atrocious and it is imperative to get rid of Trump in November.

I do agree that’s a very loudly and insistently expressed viewpoint that is held by most people in media.  We know it’s the prevailing view of the American political establishment.  But we also know that Americans, taken as a whole, don’t actually think like the American political establishment.  The contrarian trend of state and local offices during the Obama years — statehouses, governorships, the U.S. House and Senate going more Republican with each election — is just one example of that.  The islands of blue voting patterns where the leaders of government and media work, in contrast to the sea of red where they don’t, are another example.

The American people’s propensity to arm themselves is another.  It’s still very, very strong, and noticeable in every crisis.  This is not a people looking to “government” to fix everything for them. (If anything, it’s a people noticing that much of government seems startlingly, blatantly devoted to making things worse.)

Few are confused anymore as to which party — Democrat or Republican — or which candidate — Biden or Trump — will protect Second Amendment rights, respect a responsibly armed populace, or consult the Constitution in seeking to improve police practices or restore law and order.  Few, that is, outside of some in the political establishment, and their acolytes in the social bubble of the Left.