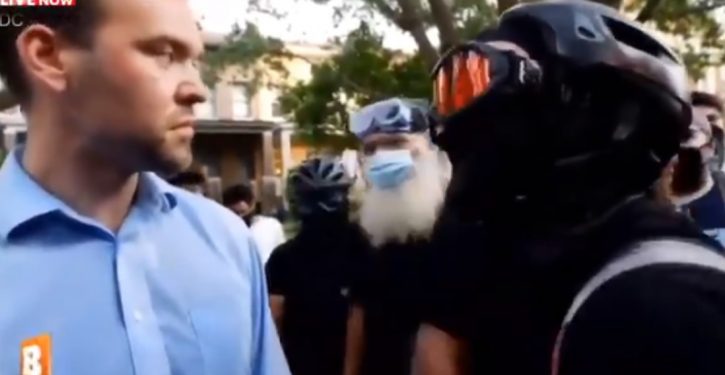 The videos being tweeted here are from Friday evening in Washington, D.C.  Jack Posobiec, a conservative new-media journalist, was there to cover the ongoing protests.

Violent hooligans in “black bloc” attire, commonly affected by Antifa and similar groups, recognized Posobiec and decided to harass him and drive him from the park.  Andy Ngo, an independent journalist with extensive experience covering black bloc agitators on the West coast, identifies them as such in forwarding this clip from the encounter.

A longer clip is below.  In it, the black bloc hooligan calling “Jack!  Jack!” and issuing threats tries to intimidate Posobiec with an open threat to dox his vehicle plate number — i.e., invite attacks on his car.  One attacker tried to steal Posobiec’s phone.

The police are present.  A man who looks like a constable escorts Posobiec away from his attackers.  In the clip forwarded by Andy Ngo, the last few seconds show a law enforcement officer warning the black bloc attacker to back off.

But driving Posobiec out of the park?  They — the black bloc thugs — get away with it.  It’s obvious who’s in charge here.

The black bloc is coming for everyone.  It’s coming for your First Amendment rights, as it did by exercising a heckler’s veto over Posobiec’s here.  It only affects to call people “Nazis” and “fascists” for the purpose of attacking them.  The black bloc’s tactics and intentions are those of Nazis and fascists.  Literally: this is what Nazis did in Germany and fascists did in Italy to intimidate the middle class, drive them from the public square, and create chaos and fear.

Jack Posobiec, meanwhile, needs no political defense; he’s just an ordinary conservative, not “alt-right,” not problematic, not even dubious.  This is our national security, the essence if who we are, bleeding out from within.  This is not OK.

Attorney General Barr announced Friday that he is creating a task force to go after the “extremists” who have been attacking cities wherever protests are occurring (and in some places simply attacking, without the pretense of participating in protests).  He named Antifa as one of the groups; he also, properly, included the self-styled “Boogaloos,” who have a much smaller profile of participation and activity than the black bloc, but have two murders of law enforcement officers on their sheet in California.

Barr is going the right direction.  In a podcast with Senator Ted Cruz this week he said the Justice Department has about 500 investigations of rioters underway, and “scores of” indictments.  And note that that’s in spite of the limits within which the federal DOJ has to operate (it only has jurisdiction over certain situations and crimes).  The number of investigations is quite large; we’ll see how well the DOJ can keep such an enterprise going.

It’s a necessary one.  The DOJ will need cooperation from the states, which have to step up and prosecute state-level crimes if order is to be fully restored.  The feds can’t do it all.  They shouldn’t even have to do most of it, although they do have a legitimate role here, given the breadth of Antifa’s reach in cities across the country.  This is an attack on the entire nation.  It’s concentrated in cities where Democrats are in charge, because it’s easier to get away with things there.

And none of it will make a difference if the American people keep believing lies about who’s doing what.  On Thursday, Rep. Jerry Nadler (D-NY), chairman of the House Judiciary Committee, referred to Antifa as “an imaginary thing” in a House debate on police reform.  A former member of Antifa begs to differ.  Unfortunately, Democrats have a history of ignoring and dismissing Antifa, including pretending that it doesn’t really exist. 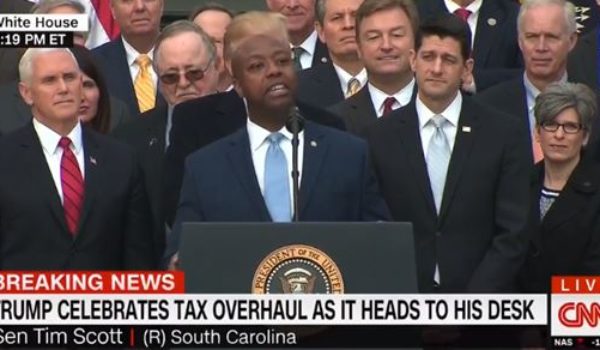