A Georgia state trooper’s response to being asked to kneel at a recent Black Lives Matter protest has gone viral.

Trooper O’Neal Saddler told bystanders that he has “respect” for the protesters but that he has no intention of taking a knee for anybody … except for one person.

“If I didn’t have any respect, I wouldn’t [be here],” Saddler explained. “I was supposed to be out of town this weekend with my wife. I took off today, this weekend, but I’m out here to make sure y’all are safe.”

He continued, “Don’t go there with respect, OK? I have much respect, but I only kneel for one person,” to which someone in the crowd shouted, “And that’s God.”

He was asked to kneel today, and this was his response.

Protesters demanding that law enforcement take a knee is not a sign of solidarity but a sign of submission. That is what they want to see from police officers.

Saddler seems to recognize it as such.

Countless numbers of people who have viewed the video expressed support for the state trooper, though his Facebook page has highlighted some who disgustingly attacked him for the response.

His reply to the criticism was all class.

“Any person has a free right in America to do as they want kneeling or not,” he wrote.

“Please remember the actions of bad officers don’t make me or other good officers bad,” he added. “The Floyd family and so many other families need prayer right now. So please pray [for] them.”

While Saddler was refusing to bow to any man or movement, Democrat members of Congress were showing there’s no group they won’t kneel before.

Lawmakers presented a police reform bill called the “Justice in Policing Act” on Monday and followed up by taking a knee and bowing their hands. They also donned shawls made of Kente cloth in an act of virtue signaling, for which they have been upbraided by Africans offended by the pandering gesture.

House and Senate Democrats kneel in silence in Emancipation Hall for 8 minutes and 46 seconds in remembrance of George Floyd https://t.co/RwRF3r3dVK pic.twitter.com/clQwQEBgxk

These are the same Democrats who tried desperately to remove God from their party platform years ago. 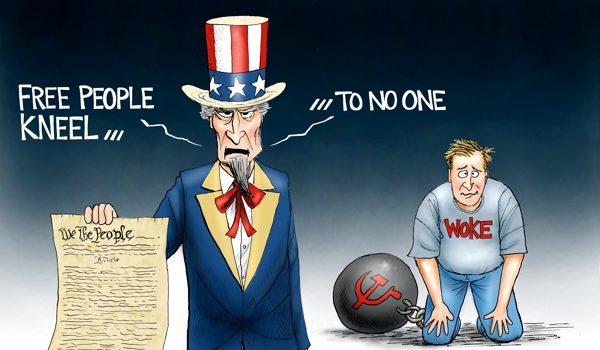 Cartoon of the Day: Stand for freedom
Next Post
Biden’s misleading attacks on Trump’s job numbers will come back to bite him