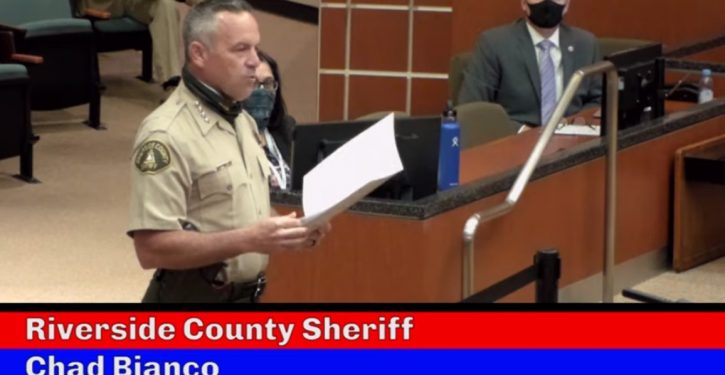 This brief video clip (three minutes long) is worth making a feature of, partly because the sheriff so accurately expresses what millions of Americans in locations with average population and inherently sufficient social-distancing are thinking.  In the entire United States, there’s only one New York City, with a population bigger than those of 38 states, crammed into a land area the size of Augusta, Georgia.  Nowhere else in the nation is it necessary to manage a pandemic virus as if it’s NYC (or the NYC metro, for that matter, which includes exceptionally dense parts of New Jersey).

A similar principle is at work even between America’s other major cities and the smaller ones.  The people, armed with good information, will by and large choose to take sensible precautions.  There’s no need for law enforcement to prowl the land in less-dense areas arresting people – nor any need for public officials to keep thinking up new features for a society-wide lockdown.

But my interest is also partly because Sheriff Chad Bianco, of Riverside County, California (pop. 2.5 million), is the rare California official I actually voted for who is delivering on the way I thought he’d serve the public.

Ordinarily I’d probably run this as one of our Quick Takes.  But I want maximum exposure for it.  California, with more than 39 million people, has more red counties than blue, more “red” voters than most of the other 49 states, and millions of Americans who still believe in the tenets of our nation’s Constitution and political philosophy.  Two of the core principles of the American political philosophy:

1. The purpose of law is not primarily to constrain the people.  It’s to restrain the armed state in its dealings with the people.

Riverside County was red for decades, until it became the lightest shade of blue in the 2016 election. (There are various theories on that, which include an increase in affordability “emigrants” from Los Angeles, a noticeable exodus of red voters in the 2008 mortgage-lending crisis — people leaving for Arizona, Nevada, Texas — and the very rapidly growing foreign-born population.)  Quite a few of the state’s 58 counties have sheriffs whose sentiments are like Sheriff Bianco’s.  The outliers are the sheriffs of the handful of deep-blue-county behemoths, where the concentration of millions of blue voters outweighs everyone else in the state.

Bianco isn’t the first sheriff to spark a fresh understanding of our heritage from English law, and the Founders’ view of government and its levels of proximity to the people.  Enjoy. (H/t Weasel Zippers)

A world full of whiny parasites and crybabies
Next Post
Euphemism alert: AP wants to do away with the term ‘mistress’