From the goofy, low-res grin plastered on the face of the Florida Democratic Party chairwoman, whose image is awkwardly frozen onscreen for ten seconds before she begins speaking, to a hand covering the camera lens just as a high schooler is about to recite the Pledge of Allegiance, Joe Biden’s virtual Tampa rally couldn’t have looked more amateurish or comedic if it had appeared on Comedy Central.

I’ve written extensively about Biden’s issues with technology, but apparently his confusion is contagious.

The rally was so slapdash and low-tech that even the Washington Post felt compelled to headline its article on it “Glitches, awkwardness and blank screens mar Biden’s virtual Tampa rally.”

“What was supposed to be a crisp and cool introduction,” according to the Post, ended up being a laugh riot.

There was the cut to Janet Cruz, a state senator who sat silent before the screen cut away from her, only to cut back without explanation moments later. There was the shot of Rep. Charlie Crist, D-Fla., dabbing his chin as he waited in silence against a backdrop of palm trees and high rises. It was unclear whether he knew he was on.

Among the more memorable moments from the video, which appears below, is the transition between Dem Party Chair Terrie Rizzo and pledge reader Jack Kirk. The fun begins at 2:59 and includes the camera remaining fixed on Rizzo after she is finished speaking. This is followed by a voiceover introducing high school student Jack Kirk, after which the camera cuts clumsily back to Rizzo, this time with the caption “Jack Kirk.”

When the boy finally appears onscreen and begins speaking, there is no audio. The audio and picture throughout are both frequently choppy or fade out altogether.

Some of the glitches are so severe that they defy description. Check out the disaster at 35:31.

When Biden finally makes his appearance at 37:03, his image leaves something akin to computer mouse trails as he sidles up to the microphone.

Perhaps the best morsel from this hash comes toward the end of Biden’s pitch, when he says over a chorus of what sounds like bird chirps, “We need to remember who we are. We’re the United States of America.” Coming from a man who is unable to remember the name of the president he served under, this has got be the ultimate in unforced errors. 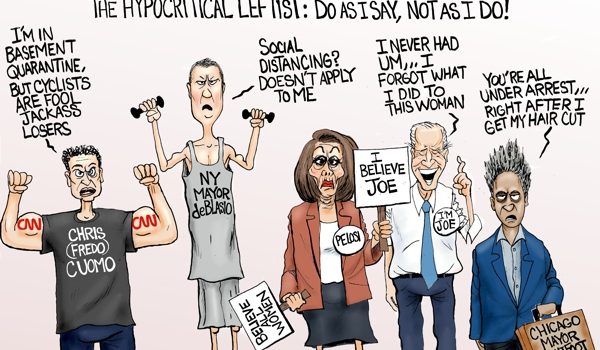