“Over his three decades in politics, Biden has been known to scream at staff on occasion, but Biden aides said since he has become president, the yelling has become more frequent and directed at a wider audience of staff.” The Washington Post reveals that about Biden in passing, in a news story about the passage of a Biden-backed $1.2 trillion infrastructure bill.

The Washington Post never disclosed Biden’s nasty temperament to readers in the months before the 2020 election. Then, it depicted Biden as an amiable, mild-mannered moderate who was like everybody’s uncle, and would restore dignity to the Oval Office. The reality, of course, was that Biden’s bad manners toward staff have been well-known in Washington circles for years.

The Washington Post also hid from readers the fact that Biden’s proposed policies were anything but moderate, as an LU contributor noted in the month before the election. As he pointed out in a newspaper on the eve of the election,

Biden has proposed raising taxes by $3 trillion, and spending by $11 trillion, over the next decade. That’s much more than Democratic leaders wanted to spend in the past, and it would lead to $8 trillion in new national debt.

By contrast, in 2016, Democratic candidate Hillary Clinton proposed only $1.4 trillion in new spending over a decade, largely paid for by $1.2 trillion in tax increases.

Biden is far to Mrs. Clinton’s left on fiscal matters and the economy.

Biden’s vast spending increases could endanger America’s finances. The national debt is already bigger than our economy, and growing rapidly.

But the Washington Post claimed in 2020 that Biden was a “moderate” and a “centrist,” unlike the “liberal” Hillary Clinton. The Washington Post’s coverage of the $1.2 trillion infrastructure package backed by Biden was slanted in its favor, ignoring the fact that it is wasteful, inefficient, and will increase the size of the federal budget deficit.

Biden has also proposed an even larger $2.5 trillion infrastructure bill, that has yet to pass Congress. It would subsidize obsolete technologies, increase the national debt, reduce spending on useful private infrastructure, and drive some jobs overseas.

Joe Biden’s daughter’s diary paints her father in a troubling light, and speaks of him taking “inappropriate showers” with her.

Joe Biden has also been accused of sexual assault by a former Senate aide, Tara Reade. Reade “told The New York Times that in 1993, Mr. Biden pinned her to a wall in a Senate building, reached under her clothing and penetrated her with his fingers. A friend said that Ms. Reade told her the details of the allegation at the time. Another friend and a brother of Ms. Reade’s said she told them over the years about a traumatic sexual incident involving Mr. Biden.”

Recently, the New York Post reported on documents showing that Joe Biden was complicit in his son Hunter’s influence-peddling.

Man Who Beat, Stabbed Dog In Case That Garnered International Attention Sentenced To 10 Years In Prison
Next Post
Joe Rogan Reacts To Brothel Offering Sex For People Who Get Vaccinated 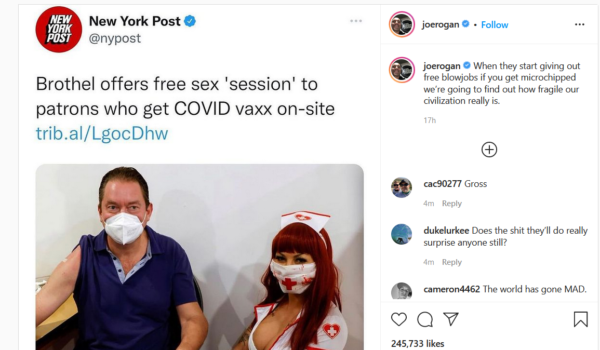