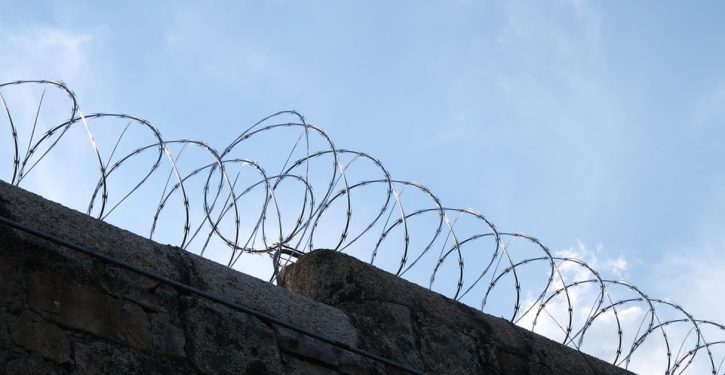 Criminals are being released from jail due to the coronavirus pandemic, especially in progressive states. But states should think twice about letting criminals out, because it won’t save lives. Instead, it will spread the disease far and wide, and increase the crime rate, including murders and rapes.

Supporters of releasing criminals say it will protect them from catching the virus in prison and being harmed by it. But COVID-19 already is pervasive in our prisons, and many inmates are either asymptomatic carriers of the virus, or already had it and swiftly recovered from it. The fatality rate from the disease appears to be less than 1 percent for inmates, who tend to be young, just as it is for many other demographics.

Inmates aren’t going to catch the disease a second time, much less die from it. But if they are released, asymptomatic inmates can infect lots of people. That includes inmates’ elderly relatives, who are much more likely to die of COVID-19 than criminals themselves, who tend to be younger and more able to cope with the virus.

Recently released inmates are testing positive for COVID-19, even when when they were screened before release, and did not show any symptoms until after being released. This is raising “concerns” that the disease “could spread to the communities where people return upon release.”

Sex offenders and murderers are being released from jail due to the coronavirus, enabling some of them to commit new crimes. ABC News reports:

A high-risk registered sex offender was arrested Thursday for allegedly exposing himself . . . just two weeks after a controversial early release from the Orange County Jail.

Seven inmates who were deemed high-risk sex offenders were released early in April by a court commissioner, triggering criticism and warnings from county law enforcement officials who said the release was not necessary because the jails were not overcrowded.

In Massachusetts, “Two convicted murderers from the North Shore are among the more than 200 inmates released by the Massachusetts Department of Correction” under a state Supreme Court order citing the coronavirus pandemic. One of the murderers “stabbed” her victim “108 times over the course of several hours,” an extreme form of torture.

In Washington State, a serial killer who murdered 49 women was nearly released in a push to release hundreds of violent criminals.

Releasing criminals will increase the crime rate, as studies show. The National Bureau of Economic Research has a web page titled “Sentence Enhancements Reduce Crime.” It discusses how California’s Proposition 8 reduced crime by keeping “repeat offenders” off of the streets. According to the study cited, “Because convicted criminals were serving longer sentences, years after the law’s change they were still locked up, rather than out on the streets committing crime.” Murderers sometimes commit murder again after being released from prison, even those released from prison at an advanced age.

Releasing criminals will not save many inmates’ lives. An inmate who catches COVID-19 is unlikely to die from it, and may not even show symptoms of the disease. In the prison in Michigan’s capital city, 75% of inmates had the “virus without symptoms.” A North Carolina prison “just tested all 700 people incarcerated. 444 of them tested positive. 90% had no symptoms,” notes Michael Bloch, a lawyer for criminal defendants. The Montgomery County (PA) jail tested every one of its 948 inmates for COVID-19. 177 of them tested positive. 171 of those 177 showed no symptoms, reports the Philadelphia Inquirer.

As lawyer John Hinderaker notes, “testing has repeatedly found that 95% or more of the inmates who test positive for COVID-19 never knew they had it.” But they can still give it to other people, such as elderly relatives whose immune systems are weaker, and could die of coronavirus as a result.

Most inmates can’t safely be released, since they either have the virus, or are at prisons that lack the ability to test them, leaving unclear whether they are infected. For example, 80% of the prison population in Marion, Ohio, carry the virus. The Washington Post’s Radley Balko is an inmate advocate who wants to reduce prison populations. But as he concedes, “The more we learn about jails/prisons and COVID-19, the more it seems that most facilities fall into one of two categories: 1) Those with astonishingly high rates of infection 2) Those that aren’t testing.”

Despite such realities, a judge recently ordered federal officials to reduce the population of a detention center where criminals contracted COVID-19.

The number of inmates potentially released due to the coronavirus could be large.

In Virginia alone, large numbers of violent criminals could be released due to Governor Ralph Northam’s amendments to the state budget, which were approved by the Democratic legislature in late April. Citing the coronavirus epidemic, Northam amended the state budget to permit the state’s Department of Corrections to release criminals with less than a year remaining on their sentences, if they hadn’t committed certain extreme crimes. (Criminals are not eligible for release if they committed certain sexually-violent offenses, or certain types of premeditated murders, such as the killing of a cop or a child).

The criminals now eligible for release in Virginia include the following: