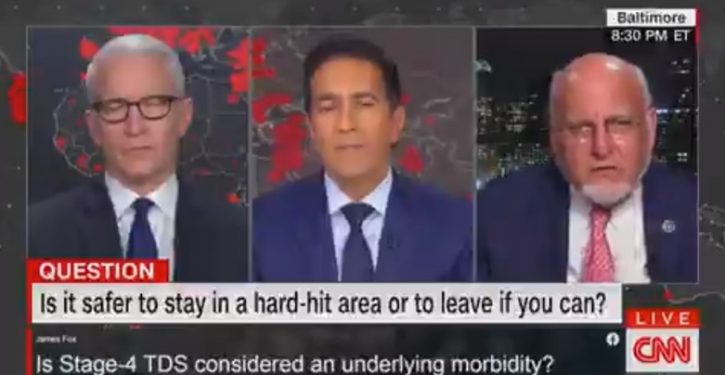 CNN hosted a virtual town hall on the coronavirus pandemic that included a question from a viewer about Trump Derangement Syndrome.

The question made it as an on-screen graphic while Anderson Cooper, Dr. Sanjay Gupta, and CDC Director Robert Redfield fielded questions from the audience.

While it wasn’t actually addressed, seeing a question about Trump Derangement Syndrome (TDS) appear as a chyron on the least trusted name in media is pretty amusing. “Is Stage 4 TDS considered an underlying morbidity?” the question reads.

CNN, along with a vast swath of the mainstream media have at times been accused of TDS, a condition marked by such deep hatred and resentment of the president that it causes one to lash out by randomly lying, quoting statements out of context, or even accusing Trump of wanting to murder people. CNN has been in Stage 4 TDS since Trump announced he was running.

Another textbook case of the ailment can be seen in Washington Post “conservative” columnist Jennifer Rubin.

If Biden is serious about winning he needs to accuse Trump of willingness to kill people. https://t.co/JiTMMGvDBE

As for CNN, the network was on the receiving end of quite a bit of mockery for being unable to identify an obvious joke about TDS and keeping it from airing.

CNN really ran a viewer question about “stage 4 TDS” (aka ‘Trump derangement syndrome’) being related to covid in their viewer question scroll… pic.twitter.com/1tW2oQeMc5

“I feel bad for whoever let this one slip through,” said former CNN Digital Producer Steve Krakauer.

Let’s just hope somebody at that network finds a cure and finds it fast. Maybe then one day they’ll see their ratings improve and they can be respected as an actual source of news again.