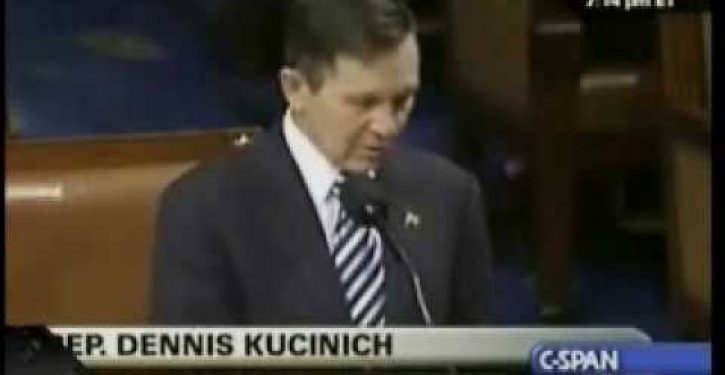 Rep. Bennie Thompson went on a ridiculous rampage on a New Nation of Islam radio program, as reported by Andrew Kaczynski at Buzzfeed today.

Aside from saying Republicans “are only anti-big government and anti-Obamacare because President Obama is black,” he targeted Supreme Court Justice Clarence Thomas as an “Uncle Tom” and said Mitch McConnell is “racist” and that “the governor of Mississippi was against expanding Medicaid through Obamacare just because a black man created it.'”

If he did not see how George Bush was treated, he clearly was not paying attention.

Here is a flashback:

“Now all of a sudden, government is the worst thing in the world since a black man became president.”

President Obama would disagree, as he blamed President Ronald Reagan for declining trust in the government in an unreported story from December:

“We’ve had a politics, frankly, you know, the entire Republican Party brand since Ronald Reagan has been ‘government’s the problem.’ And if you, day after day, week after week, election after election, are running on that platform and that permeates our culture and it’s picked up by, you know, ordinary citizens who grow skeptical, then it’s not surprising that over time, trust in government declines.”

Oh yes, Thompson also said that banning  Los Angeles Clippers owner Donald Sterling for life and imposing a 2.5 million dollar fine for comments he made to his girlfriend was a good start, but the NBA needs to go further, according to the Hill.

“Some of the powers they have over players should be applicable to owners as well,” Thompson said. “So I think the league will have to strengthen their standing for owners so that, going forward, they will have to look at other sanctions, including forcing the sale of the franchise.”

This ongoing double standard is not okay.

Not only were Rep. Bennie Thompson’s words demonstrably false, they are divisive. For some of our friends on the radical left, staying in power is more important than defending failed policies.

Secretary John Kerry: A man for no seasons
Next Post
Emails show Susan Rice coached by White House to lie about Benghazi