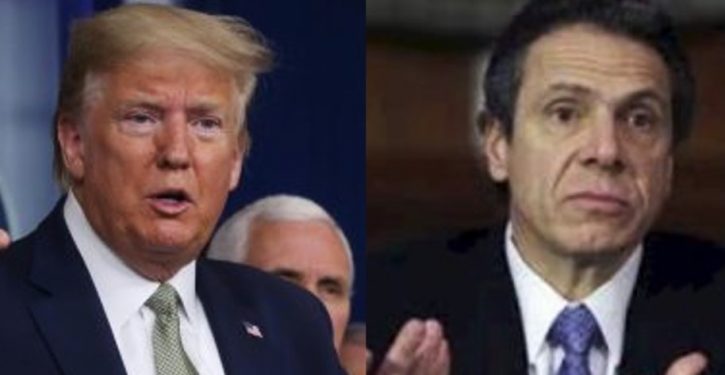 What we have here is a failure to communicate.

The chief reason it’s so hard is that the media are trying to make it so.

Here’s the deal.  New York is trying to collect more ventilators.  This is not because there’s a shortage today. There isn’t.  In fact, there are thousands of ventilators sitting in storage in New York, not needed right now and waiting to be called for in the future.

But according to the expert projections Governor Andrew Cuomo is getting, there won’t be as many as New York needs.  The experts are saying the state will need about 40,000 ventilators about 21 days from now (now being Friday, 27 March).

Cuomo says the ventilators NY has have not been distributed because “the hospitals don’t need them yet.” He says he expects they will be needed when the NY outbreak reaches its apex.
pic.twitter.com/yDRBgmvUWd

(New York, with New York City in it, is our hardest-hit state, so I’ve got no beef with Cuomo trying to find all the ventilators he can.  Vice President Pence has to look out for all the states.  He’ll make a fair call, if one needs to be made.)

So Cuomo is out scrounging more.  Pence says 4,000 more are on their way to New York this week.

President Trump, we are told, doesn’t think New York needs that many.  It isn’t clear whether Trump means “ever,” or “right now,” nor has the basis for any differing assessments been examined.  The expert behind the Imperial College (UK) model that has produced the worst-case estimates many authorities are going with now says the model’s predictions are significantly too high.  Trump’s adviser Dr. Deborah Birx noted on Friday that current results on the ground are falling well short of the worse-case estimates the Imperial College model originally came up with.  Chances are awfully good that Cuomo is still going with that worse-case thinking (which is not irresponsible, but neither is considering that maybe a poorly modeled worst case should not drive our decisions).

But God forbid anyone should just politely ask Trump, rather than going with whatever assumption can be touted as making him look the most foolish and obstructionist.

Whatever Trump thinks about Cuomo’s effort to get more ventilators, he is certainly not standing in the way of more ventilators being made available.  He has the vice president’s team helping the states turn up ventilators, he’s stressing to industry the need to make more, and on Friday, he used his authority under the Defense Production Act to order General Motors to make ventilators.

GM has framed this as an order that wasn’t necessary, as they were already planning to make ventilators.  The media have obligingly reported it just the way GM prefers, portraying the president as irritable and behind the curve.

But anyone who’s ever actually been in charge of anything knows what Trump did here.  Of course it was necessary for him to invoke the DPA.  By doing so, he imposed a specific set of due-outs.  That’s how you take responsibility in this situation: by clearly stating your requirements, using the instruments of your authority.

Trump is not relying on a GM leadership that is transparently hostile to him to produce the number of ventilators at the price and on the schedule that will meet the needs Trump’s advisers foresee.  Even if GM seemed to have a better attitude, Trump stating his requirements would still be the right thing to do.

Trump has put down his marker.  The media can try to obfuscate that, but now anyone can double-check their work.  Neither the media nor GM can pretend that something different was done at Trump’s behest, because Trump has stated what’s to be done at his behest.

That last point is what’s important.  But it’s also true that if GM doesn’t meet Trump’s requirement, that will be on GM.  GM and the media can’t pretend it’s because Trump failed to place the exactly, most perfectly correct order, or failed to state proper expectations.  We all know what the order consists of.

The only way to minimize the media playing games with this is for Trump to articulate orders, rather than leaving matters to good faith and handshakes (or elbow bumps).  That’s sad, but it’s the remedy when the media want to cause riot and mayhem in every interstice where business is done based on good-faith expectations.

The media are determined that bad faith shall rule.  So Trump has to write everything down with a notary’s stamp on it.

None of us knows who’s right about how many New York will need in 21 days.  Even more importantly, we don’t know that Trump and Cuomo actually disagree on that point.  In a fast-moving environment, in which a very significant factor — the Imperial College prediction — may have changed, the question hasn’t been framed for both of them from a common set of assumptions.  It looks to me like that’s something Trump and Cuomo can and will work out between them.  It’s the media that are rooting against that beneficial outcome.

The only way to make the media’s meddling with the public dialogue go away is to simply stop believing that every piece of Horrible Bad News is valid – especially when it makes someone look bad.  And let’s be burningly honest here: that someone is usually framed to be Trump, and people who really love that are just going to have to get over it, if they ever want to have their feelings back in balance again.

Trump is not the problem.  Trump can’t make anyone misbehave.  Most of the time when Trump-haters think Trump has been misbehaving, it’s not even true.

Moreover, when Andrew Cuomo or some other governor is looking out for his state, it’s not because he’s reacting to the Epic, Supercolossal Stupidity of Trump; it’s because he’s doing his job.

I hold no particular brief for Cuomo.  I don’t want him to be America’s president.  How utterly asinine that I even have to say that, just because I’ve given him the benefit of the doubt here, and been willing to consider that his search for more ventilators is not an attempt to make Trump look bad, any more than it’s an opportunity to make Trump look bad.  (If it is an attempt, as a collateral benefit for what a governor needs to do anyway, it’s no worse than politics typically gets.  What the media are doing in trying to ignite flames here, however, is way over the top and wildly unaccountable.)

Most people can see at this point that reality is not what the media are depicting.  Everyone else isn’t melting down.  The media are!

Ignore the media’s relentless, three-year-old doody-head screeching.  I mean that.  When they say “Trump has been a moronic nincompoop,” ignore them and assume he has not been a moronic nincompoop.  When they say “Governor X is [being victimized by Trump/having to outsmart Trump/actively outsmarting Trump/hating on Trump],” ignore them and assume that’s not happening.  Maybe sometimes you’ll be wrong, but it won’t be about anything that’s going to get you killed.  And you’ll feel a whole lot better.

Just ignore the loaded headlines and baited hooks.  That’s the only thing that will make it stop.