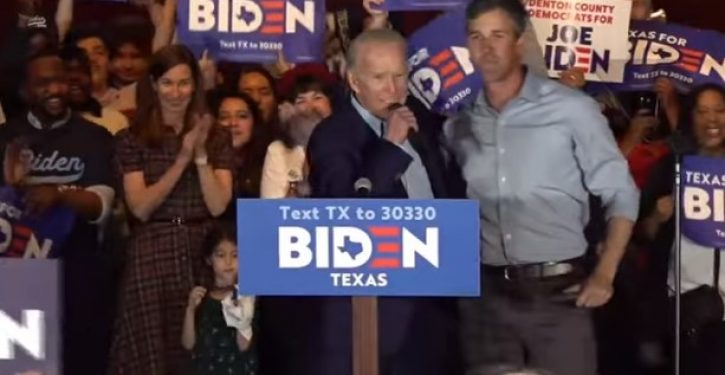 Well, at least he’s not tripping over his words in this exchange.

The former vice president has developed something of a reputation for his confrontational approach toward voters on the campaign trail who don’t agree with his views. In February he called a 21-year-old student in New Hampshire a “lying dog-faced pony soldier.” Since then, he has threatened to raise the taxes of one man who professed to be doing well under the current economy and poked a finger into the chest of another who took issues with his policies.

Up until now he hasn’t reverted to the Joe Biden who whispered “This is a big f*cking deal” loudly enough to be picked up by microphones. But that changed this morning during a campaign stop in Michigan when an an auto worker accused him of “actively trying to end our Second Amendment.” Biden replied, “You’re full of shit,” indignantly adding:

I support the Second Amendment. The Second Amendment — just like right now, if you yelled ‘fire,’ that’s not free speech. And from the very beginning — I have a shotgun, I have a 20-gauge, a 12-gauge. My sons hunt. Guess what? You’re not allowed to own any weapon. I’m not taking your gun away at all.

This is insane. Beyond telling the guy he’s “full of shit” Biden gets in his face and then says something about “take this outside.” Mainstream media can’t run cover for this much longer.

Anyone know who the man is? Would love to have him on the show.

The dialog continued for several more minutes, ending with this pleasant repartee, according to CBS News:

Auto worker: This is not OK, all right?

Joe Biden: Don’t tell me that, pal, or I’m going to go out and slap you in the face.

Biden: I’m not working for you. Don’t be such a horse’s ass.

So who’s right? Is Biden trying to undermine the Second Amendment, or is the auto worker “full of sh*t?” Watch the following video, beginning at 1:11:00, and judge for yourself. In it, Biden says:

And what was Beto O’Rouke’s stated position on guns toward the end of his presidential run? It is embodied in a t-shirt sold at his campaign website:

Virginia lawmakers pass bill giving ‘driving privilege’ cards to illegal aliens
Next Post
What kind of show were they running? Doubt on the march for Comey’s Lynch ‘kompromat’ tale, the Russia-WikiLeaks theory