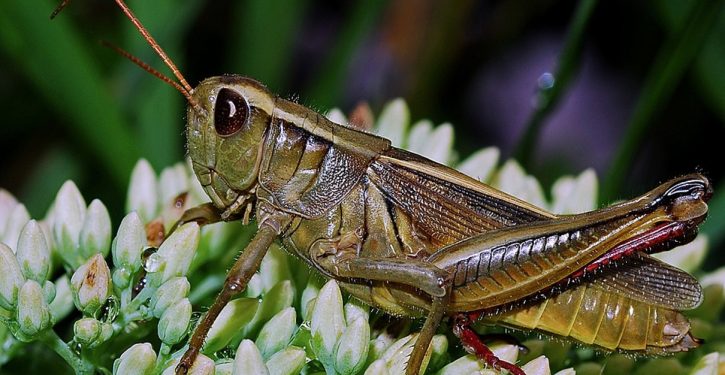 Valentines chocolates may be tasty, but most caterpillars are better for you. As Columbia University’s Adam Tooze notes, “Caterpillars are packed with potassium, calcium and magnesium. 100 g provide a person with the required daily intake. They are richer in protein than beef or fish. A handful is packed with about 500 calories, more than are in a fast-food cheeseburger.”

Eating bugs is popular in Africa’s Congo, reports The Economist, and that includes caterpillars and grasshoppers.

AT A MARKET in Goma, a city in the east of the Democratic Republic of Congo, an old woman pulls the wings off live grasshoppers and tosses their wriggling bodies into a bucket. She collected the insects from the airport at 5am that morning, and will go back the next day. Grasshopper season has just begun.

Throughout November dozens of grasshopper-hunters gather at Goma airport most mornings…People stuff them into plastic bottles to take to market. Buyers season them with salt and eat them with rice or cassava.

In war-torn Yemen, people ate the locusts that plagued the county’s crops, reported Middle East Eye. Street vendors sold them in the county’s capital, Sanna. Villagers “caught locusts at night, when the grasshoppers are not flying. With flashlights on their foreheads, the villagers throw scarves or other large bits of cloth over the insects to trap them, before sweeping them into sacks.” Farmers ate “locusts with rice” and took “sacks of them to Sanaa to sell either fresh or grilled on the side of the road.” “Its taste is delicious. If you eat one locust, you will end up wanting to eat five,” said a father of two. “I walk every day after breakfast to find locusts for dinner. I have become addicted.”

Food scientists at the University of Queensland in Brisbane, Australia are incorporating insects such as maggots and locusts into a range of specialty foods, including sausage, as well as formulating sustainable insect-based feeds for the livestock themselves….

Insect protein is certainly healthy, and insects are low in fat. Actress Nicole Kidman eats raw insects—such as mealworms, horn-worms, and crickets—and says they are tasty.

Eating insects rather than beef or pork reduces greenhouse gas emissions and water pollution, as Benjamin Kolb notes at SciDevNet.

Biden once again threatens physical violence on Trump: Crickets from the Left
Next Post
No charges against Andrew McCabe; McCabe says ‘absolute disgrace’ to put his family through this