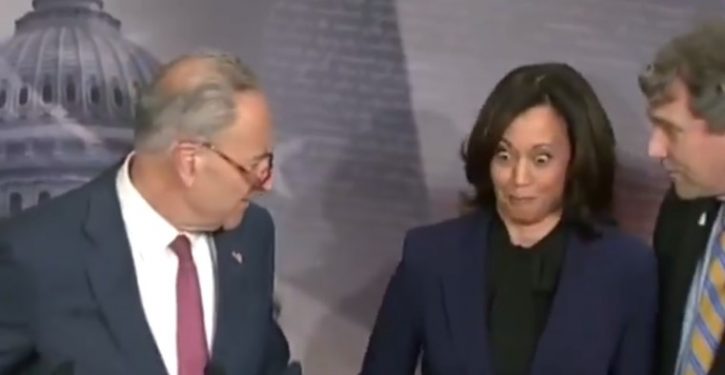 Democrats are no longer salivating over the prospect of seeing Donald Trump frog-marched out of the White House, but they will want you to know they’re solemn as hell about the grave responsibility they just undertook. Never mind that they failed miserably at their impeachment travesty. They’re still solemn.

Or maybe irritated beyond belief is a more apt description. That goes triple for Senate Minority Leader Chuck Schumer, who is so aghast over what he is now calling a “sham impeachment trial” that he can’t stop venting in front of the cameras.

It was during one such cathartic moment, flanked by fellow Sens. Kamala Harris and Sherrod Brown, that Papa Chuck paused in his remonstrations to tell his two colleagues to put a sock in it. As you can see from the video that follows, Harris was clowning around with Brown, adjusting his lapel pin or some such when Schumer turned around and gave them both the whammy eye.

The incident was an embarrassment to all parties concerned, though Harris wouldn’t have been out of place to put Schumer’s in his.