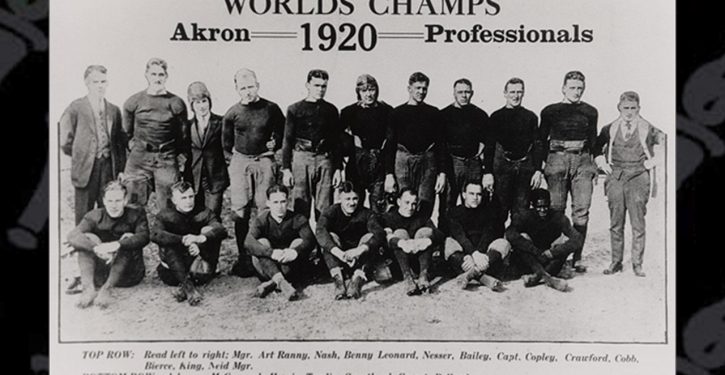 In honor of 100 years of a national professional football league (originally the American Professional Football Association, established in 1920), we bring you the 1920 champions, the Akron Professionals. The Akron Pros went 8-0-3 that season, and were voted the champs by the league owners. Wikipedia: By Unknown - http://library.brown.edu/cds/pollard/proandcoach.html, Public Domain, Link

There’s this curious headline on the web:

I hesitate to look.  People have to be told they can turn the TV on and watch the Super Bowl that way?  (It’s on Fox.  Which means no Tony Romo in the booth.  Joe Buck and Troy Aikman, natch.  There’s this whole weird subculture that likes to dump on Buck on social media during games, which seems like an awful lot of unnecessary effort.)

Or maybe it was supposed to be Super Bowl 54 LIV and the headline editor didn’t get the memo.  The “for free” part is still perplexing.  Life is too short to bother with it further.

OK, OK, we’ll have a placeholder here for the Super Bowl.  This in no way means that the NFL is back in our good graces.  We’re pifflicated by headlines like this one at the Wall Street Journal:

Trending: Even Jim Acosta’s own peers in the mainstream media are tiring of his antics

PETA said Friday that its proposed commercial inspired by Kaepernick, who is a vegan, wasn’t accepted by Fox “because of efforts by the NFL to block it.”

Some outlets just shouldn’t be allowed to write about sports.  C’mon, man.  First of all, Kaepernick has been absent from the 49ers for, like, 14 years in dog years, and no one who follows football had any interest in or expectation of seeing him in Super Bowl LIV.  He’s Not Hot at this point.  Get a life.  Move on.

Of more interest to many fans, probably, is the glaring absence of the Patriots at the Super Bowl.  At least it’s something of a relief.  We, personally, are feeling pretty confident there won’t be any commercials in which Tom Brady hawks mattresses to us.

We’re hopeful that the action on the field will have some zip to it.  Chiefs QB Patrick Mahomes has every prospect of being electrifying enough for a whole phalanx of thesaurus-toting sportswriters (the adjectives out there; somebody please throw some cold water already), but the Niners bring the D, or at least they do when they’re at full, rosy-cheeked health.  They’re down a couple more defensive starters than they’d probably like.

Honey Badger will be there for KC (it’s hard to remember he’s only 27.  He’s been pounding gridiron for a lot of dog years now).  He’ll have his hands full with the Niner receiving corps, which has perfected the art of skipping up and sideways to get past aspiring tackle-monsters, if not so much for TE George Kittle, who just steamrolls because, for a receiver, he functions like a human cow-catcher.

The Chiefs have their own cow-catcher at tight end in Travis Kelce.  The Chiefs’ defense is widely expected to be the ever-so-slightly weakest link in the matrix – but the KC offense is also expected to be the strongest.  So it’s kind of a wash.  San Francisco does have a quarterback, name of Jimmy Garoppolo.  You’d be surprised how many stories have been filed on tomorrow’s game without any mention of him.  He’s no slouch.  If Garoppolo can connect with his multitalented receivers, and mix the offensive looks up the way the Niners prefer to, it’ll be a real game.

The oddsquad seems to be expecting that, at any rate.  KC is giving a mere 1.5.

New names, old names.  Kyle Shanahan helming SF, good old Andy Reid for KC, looking more than ever like an ad for blood thinners.  Steve Spagnuolo, Reid’s old sidekick, calling the defensive shots for the Chiefs.  He coached with the Barcelona Dragons and the Frankfurt Galaxy back in the 1990s, you know.  His c.v. is longer than Stefan Halper’s, and twice as scary.

Weather in Miami ridiculous: high of 69 (!) on Sunday, and a plunge probably into the upper 50s when half-time rolls around.  Jennifer Lopez will be entertaining us during the food- and comfort-break.

There will be Navy F-35s doing a flyover for the game opener, which is always worth tuning in for.

We’re not in the mood to sift through a lot of Super Bowl ad previews, so here’s the first one we came across.

That said, there’s this.

This guy spent $6 million to run a Super Bowl ad thanking the veterinarians that saved his dog Scout pic.twitter.com/Io8dPtFpOM

San Francisco is all strapped in, lighted-buildings-wise.

San Francisco is ready for the super bowl 🥰😍#GoNiners pic.twitter.com/ussVFXz3EY

We know you (a) don’t want to miss this one, and (b) don’t need that explained to you.

For something a little different.

THIS is counter culture pic.twitter.com/A5YBjfSmB0

Twas the night before the Super Bowl and all through KAnsas City. Not a Chiefs fan was stirring, Not even this little kitty. The flags were hung on the houses with care. In hopes that St. Catrick will bring home silverware. pic.twitter.com/f2QubbkTcz

Enjoy.  Send updates from the trenches.

Romney now very, very uninvited to CPAC after impeachment witnesses vote
Next Post
‘Politically savvy Democrats’: Hillary may be angling to get on a ticket as VP nominee

Biology: Why women are faring better than men against the coronavirus