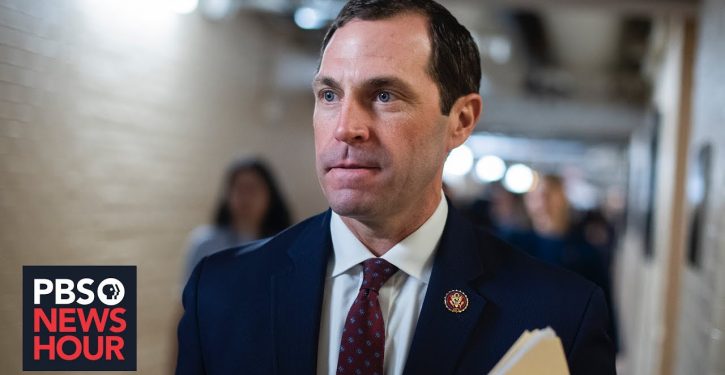 Rep. Jason Crow, currently serving as a Democratic impeachment manager, has admitted that his party’s efforts are due to the upcoming presidential election. It is a similar argument to one made by Adam Schiff recently.

Crow’s admission came during an interview with MSNBC’s Chuck Rosenberg, in which the host addressed the Democratic party’s alternating sense of urgency regarding the need to remove President Trump from office.

“Did the House move too quickly?” Rosenberg asked, noting that had the House conducted a thorough effort in the first place, they wouldn’t need the Senate to do its job now.

“No, I think the House proceeded in the way that it should have proceeded,” Crow insisted. “There was urgency, but it was also thoughtful and deliberate, it occurred over several months’ period of time.”

He then – perhaps accidentally – admitted what that urgency entailed.

“There is some urgency here,” Crow explained, before adding, “it does have to do with the elections that are coming up later this year.”

Rep. Jason Crow just admitted what we've known all along the Democrats' impeachment is about the upcoming 2020 election.

"There is some urgency here…it does have to do with the elections that are coming up later this year. pic.twitter.com/ExEOi8dKNC

You mean to tell me the Democrats are using impeachment to try and sway the election in their favor? To change the outcome of not only the 2020 election but the 2016 election as well?

Except that (a) it’s already pretty obvious to anyone with a working set of eyes and ears and (b) they’ve already admitted this before.

Crow’s impeachment manager colleague, House Intelligence Committee Chairman Adam Schiff, confessed that he and his colleagues could not wait on impeachment because the threat of President Trump winning re-election is too great.

In one fell swoop, Schiff is suggesting President Trump is cheating to win in 2020 and claiming he already cheated in 2016.

Is anybody here old enough to remember when Schiff and his colleagues were telling everybody who would listen that the notion of a rigged election is ludicrous and not accepting the results is a “threat to democracy”?

This Is Why They’re Doing It

It isn’t just Schiff and Crow who have flat-out acknowledged that the Democrats are trying to interfere with and rig the 2020 presidential election. House Speaker Nancy Pelosi, who promoted Schiff and Crow to the ranks of impeachment managers, admitted recently that her party is pursuing the unpopular sham because “civilization, as we know it today, is at stake in the next election.”

Rep. Al Green, the Texas Democrat who believes articles of impeachment should address slavery, was even more direct, stating that he is “concerned if we don’t impeach this president, he will get re-elected.”

And Alexandria Ocasio-Cortez, the New York socialist and darling of the Democratic party, got this whole process rolling by warning: “We don’t have the luxury of time. Yes, this is an emergency.”

Senator Ted Cruz explained exactly why they are doing this.

“This is a partisan sham because they’re mad – the House Democrats – are mad at the American people for electing President Trump,” he said.

Now, they’re telling you exactly that, and they’re saying it to your face. 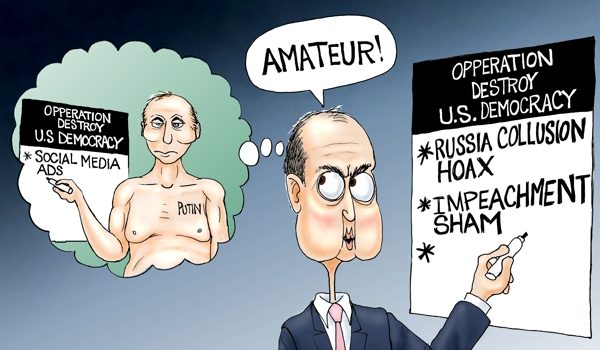 Cartoon of the Day: CouPeachment
Next Post
Elizabeth Warren wants to criminalize ‘disinformation.’ Isn’t she forgetting something?