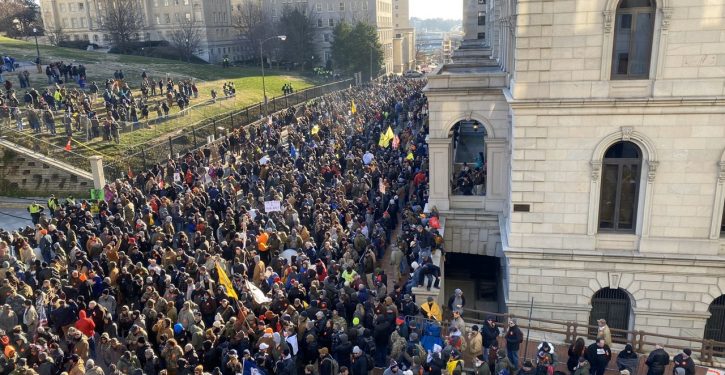 If you’ve seen the video clips and photos of Monday’s gun rights rally in Richmond on social media, you already know that it was entirely peaceful from start to finish.

The crowd has now significantly grown in size at the rally in Richmond, Virginia.

Attendees remained respectfully behind the relatively flimsy barriers set up for the event.  Indeed, they respectfully toed white lines, as requested by the police, where there were no barriers.

We lasted about two hours in the cold (folks, it is cold and windy) but it was SO WORTH IT. I keep seeing gun-grabbers post scary photos of scary armed people so of course I have to share my picture. These guys were AMAZING. 🇺🇸 #TheyArentHiding #VirginiaRally pic.twitter.com/d2mCKr9GyN

People sang the national anthem.  They recited the pledge of allegiance.  They joked with each other and chatted amongst themselves.  They talked to media.  Some of them hoisted the flag of Hong Kong alongside the American flag and the Gadsden flag, apparently showing solidarity with the determined protesters on the other side of the globe.

Speaking with Virginians today at the pro-gun rights rally in #RichmondVA and hearing their side of the story regarding the new gun control measures being unvelied by Democrats. More interviews and footage coming soon from a historic day in American history. #Virginia pic.twitter.com/RJBqDnP13c

The flag of Hong Kong is flying in Richmond today #VirginiaRally pic.twitter.com/L25HGjZ8Gt

In every clip or photo I saw, any on-the-job law enforcement personnel were gathered in small clumps, standing yards away from the rally attendees and on the other side of barriers, not engaged with the crowd.

What is so striking about the scene at the gun rights rally in Richmond is what you don’t see: almost no cops. Just that little cluster of state police there. No lines of riot cops. No law enforcement in riot gear. pic.twitter.com/W0jkwYmmkP

The crowd was simply behaving itself.  The police were just standing there.  I’ve seen no videos of police interacting directly with people at the rally.  That comports with the news summaries that indicate there was only one arrest, of a woman who refused to remove a mask (or bandanna) from her face in accordance with state law.

Only 1 person was arrested all day; a woman for refusing to remove a bandana from her face. And by the looks of her social media accounts, she's not a conservative. https://t.co/Kc4QqrmlYY

At the end of the event, people from the rally were working their way through the departing rallygoers collecting trash.  (One guy said they’d be sending his bag of trash as a gift to Governor Ralph Northam.)

The attendees were from all kinds of groups.

Representation for the gay community is also in attendance at the 2nd amendment rally in Richmond, Virginia.

More pictures of people carrying rifles at the #VirginiaRally and more evidence that debunks the narrative that the rally is filled with racists and white supremacists. pic.twitter.com/V0jGLpKW2d

This was my group in the parking lot just after the main portion of the rally. Had just gotten all our gear off and had a great conversation with these folks. However, in all truth and fairness. The Black Panthers were not really at the 2A Rally, they showed up around 12:30-1pm pic.twitter.com/wMgI9JdcH8

VA Sheriffs show up and join VA gun rights rally#Grayson County Sheriff #RichardVaughan – he said “If the bills go through as proposed, they will NOT BE ENFORCED… “

If there were “white supremacists” there, they didn’t seem to register with anyone as a hostile element.

It was clear within the first couple of hours that the “threat” to public safety from this rally had been wildly overhyped.

There was one fellow (in the video clip below) who seemed to want to incite something.  He called himself a “libertarian,” but the group of demonstrators he was trying to engage were probably correct in their assessment that he was an Antifa member (or at least a leftist radical) trying to get something started.

Possible infiltrator in Richmond, #Virginia tries to incite violence and law abiding rally-goers were not having it. "Look punk, look punk, we know what you're about, you're an infiltrator, get the f out" pic.twitter.com/idTOgkhv6t

Libertarians who genuinely regard that as their identity are very rarely the source of inflammatory incitement.

That particular video clip got a lot of attention online during the event, probably because it was the only one of its kind.  The Second Amendment rallyers on-scene were having none of it.  They refused to get drawn into a contentious exchange.

The bottom line: there was nothing to de-escalate.

That didn’t stop Northam from claiming that his “teams” had successfully de-escalated the rally.

We are all thankful that today passed without incident. The teams successfully de-escalated what could have been a volatile situation. I will continue to listen to the voices of Virginians, and will do everything in my power to keep our Commonwealth safe. https://t.co/xrHxhOczvv

His tweet was probably more for media consumption than for persuasion, however.  He needed something to say, when it turned out that the rally – contrary to his previous apprehensions – caused no problems whatsoever.  So he went with taking credit for the benign outcome.

All in all, there were reportedly about 22,000 people in attendance.  The media seemed to be hoping for blood and gore, and were uncertain what to do when they didn’t get any.

CNN: Threats which caused Gov. Northam to call for a State of Emergency "Have simply not emerged".. "The police very clear in saying they have not had a single arrest during this rally and we have been standing here all morning" pic.twitter.com/6p2JfebvFO

#NEW MONTAGE from me showing how @CNN and @MSNBC spent their mornings hyping fears that "white nationalists" and "extremists" would cause "violence" at #VirginiaRally for the #2A like in 2017 at Charlottesville #LobbyDay2020 pic.twitter.com/wR91mMPfmR

Some went with misrepresentations that were really honking weird.

I’ve listened to that clip five times now, as carefully as possible, and I have yet to hear anyone chanting “We will not comply!”  I do hear the crowd reciting the pledge of allegiance.

Many of the attendees carried signs that said “We will not comply,” and no doubt some of them, somewhere, chanted the slogan during the rally.  This was not the video clip to illustrate that with, however.  It doesn’t bolster the media’s credibility.

A very positive aspect to the rally was the diversity of rallygoers, and the opportunity the rally afforded to hear them talk about why they were there.  (All of these clips are well worth the entire time they run.  I recommend not missing them.)

An attendee at the rally in Richmond Virginia dispels the media smears against rally-goers.

He says the media is mischaracterizing them, & that they are just law abiding citizens who want to advocate for their constitutional rights.#VirginiaRally
pic.twitter.com/Vp3bJX8eNi

This is who the media was trying to call white supremacists in Richmond for supporting the 2nd amendment. The left's lies didn't work today! #VirginiaRally pic.twitter.com/ZuDPb8duY7

This pro-2A protester in Richmond just blew the doors off of every Democrat talking point on guns: pic.twitter.com/gI2AGzItlc

You have to love the lawmen standing up for the law. They won’t enforce the unconstitutional laws of Virginia if passed! Spread it around. pic.twitter.com/N49Duuwzj6

“Sir, are you a White Supremacist?” pic.twitter.com/JFhxLRfgv1

Many observers suggested that Antifa demonstrators (who had announced they were going to rally “alongside” the gun rights supporters) made none of their typical moves to disrupt the proceedings because they were surrounded by armed rallygoers.

There’s probably a lot to that.  It’s a feature, not a bug; nothing in this world is better for anyone, when Antifa feels free to provoke mayhem and havoc.  Deterring Antifa is a good thing.  Too many police forces, from Charlottesville to Seattle to Portland and the San Francisco Bay Area, have been unwilling to exercise proper deterrence – or at least have been under orders from local political authorities to stand back and let Antifa run riot.

Interestingly, the police deployed for the 20 January rally didn’t look as if they were prepared to intervene effectively if Antifa started something.  There didn’t appear to be enough of them, and they were comparatively lightly equipped.

In spite of Northam’s earlier agitation, the signal sent by the police posture appeared to be that the authorities didn’t truly expect things to get out of hand.  Two reasons for that can be logically deduced: the main crowd was law-abiding and self-disciplined, and the main crowd was armed, and itself functioned as a walking deterrent.

The Capitol surroundings of Richmond were a very safe place to be on Monday, in other words, because the rallygoers were armed.

The peace and quiet in which the rally passed stand in strong contrast to the numerous outcomes when Antifa has shown up to harass other groups’ demonstrations, and the other groups have no way to deter Antifa’s tactics and must depend entirely on the police.

In those circumstances, physical violence and property destruction have been nearly inevitable.  This has been equally the case whether the opposing groups (Antifa and, for example, the “Proud Boys” or “Patriot Prayer”) showed up for the specific purpose of demonstrating, or Antifa showed up to disrupt a non-demonstration event like a Trump rally or a campus lecture by a conservative pundit.

The difference between those previous instances and the gun rights rally on Monday is that in Richmond, on 20 January, thousands of the 22,000 attendees were armed.

Gallup poll: 51% say Trump should NOT be convicted, should remain in office
Next Post
Iranian lawmaker announces $3 million reward for killing President Trump