Democratic 2020 candidate Sen. Elizabeth Warren on Sunday was faced with the question of whether she thinks Americans want to support a presidential candidate who doesn’t tell the truth.

Warren, who has repeatedly struggled with the truth on the campaign trail, was asked during a press scrum whether it’s “disqualifying for a presidential candidate to lie to the American public about anything?”

“I would think that it — you know, how could the American people want someone who lies to them?” Warren answered. “I think that we just do our best out there every day, and I hope that’s what happens with everyone.”

GOP strategist Luke Thompson predicted Warren’s answer will “be used in ads” if she wins the Democratic nomination.

Warren, who is feuding with Vermont Sen. Bernie Sanders over whether he said a woman couldn’t win in 2020, has repeatedly faced questions of dishonesty on the campaign trail.

She infamously portrayed herself as an American Indian for years, even though she possesses a minuscule fraction of Amerindian DNA. In fact, Republican Florida Sen. Marco Rubio is apparently more “Native American” than Warren.

Warren told school choice activists in November 2019 that her children didn’t go to private schools — even though she sent her son to an elite private school.

“We are going to have the same choice that you had for your kids, because I read that your children went to private schools,” one school choice activist told Warren after a campaign event.

“No, my children went to public schools,” replied the Massachusetts senator.

Publicly available records show that Warren, who has pledged to crack down on school choice if elected, sent her son to an elite private school.

Warren also faced scrutiny over her changing versions of why she only worked one year as a public school special needs teacher after college.

She repeatedly said on the campaign trail that she was pushed out of the job for being “visibly pregnant” — but she told a different story before running for president.

“I did that for a year, and then that summer I didn’t have the education courses, so I was on an ’emergency certificate,’ it was called. I went back to graduate school and took a couple of courses in education and said, ‘I don’t think this is going to work out for me,’” she said in a 2007 interview at the University of California at Berkeley. 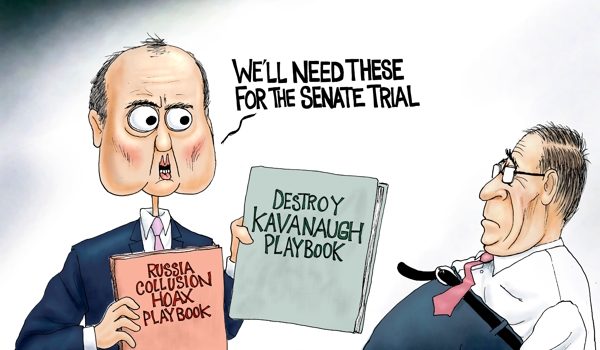 Cartoon of the Day: By the book
Next Post
Massive gun rights rally goes off without incident; Gov. Northam takes credit for ‘de-escalating’ it