Because he was chairman of the Senate Committee on Foreign Relations and vice president, Joe Biden is supposedly an expert on foreign policy. But as with everything else he has done in his public career, Biden is prone to screwing up. It’s hard to discern where he stands on Israel. As vice president he couldn’t — or at any rate didn’t — publicly oppose his boss’s anti-Israel stance. But when he was in the Senate making his own decisions, at times he seemed very supportive of America’s strongest ally in the Middle East, while at others his actions were negative and disturbing.

Even before he joined Barack Obama on the 2008 ticket, Biden seemed to agree with the future president that the Israeli “settlements” were the root of all evil. The problem with that stance is it prevents peace. During the Bush administration, there were Israel-Palestinian talks despite that Israel’s expansion. But when Clinton and later Obama made settlements an issue, the Palestinians felt justified in abandoning the talks.

A great example of Biden’s over-emphasis on the settlement issue was a Senate Foreign Relations Committee hearing in 1982. The committee was interviewing the Israeli Prime Minister, Menachem Begin.

Biden tried to intimidate Menachem Begin by pounding his fist and raising his voice, threatening to cut off U.S. aid to Israel. If he done the slightest bit of homework on the prime minister, he would have known that threats are not the way to get what you want from Begin. Begin, who had lost much of his family in the Holocaust and spent a year in a Russian gulag, saw himself as a protector of the Jewish people. He saw much of the world do nothing about the Holocaust, and was determined not to allow it to happen again.

On June 22 of 1982, Begin testified before the Senate Foreign Relations Committee.

During that committee hearing, at the height of the Lebanon War, Sen. John Biden (Delaware) had attacked Israeli settlements in Judea and Samaria and threatened that if Israel did not immediately cease this activity, the US would have to cut economic aid to Israel.

“Don’t threaten us with cutting off your aid. It will not work. I am not a Jew with trembling knees. I am a proud Jew with 3,700 years of civilized history. Nobody came to our aid when we were dying in the gas chambers and ovens. Nobody came to our aid when we were striving to create our country. We paid for it. We fought for it. We died for it. We will stand by our principles. We will defend them. And, when necessary, we will die for them again, with or without your aid.”

When Biden banged his fist on the table, Begin responded:

This desk is designed for writing, not for fists. Don’t threaten us with slashing aid. Do you think that because the US lends us money it is entitled to impose on us what we must do? We are grateful for the assistance we have received, but we are not to be threatened. I am a proud Jew. Three thousand years of culture are behind me, and you will not frighten me with threats. Take note: we do not want a single soldier of yours to die for us.

The New York Times reported on the aftermath of the meeting:

After the meeting, Mr. Begin said: ”I enjoyed the session very much. I believe in liberty, that free men should freely discuss problems and if they have differences of opinion they should voice them in sincerity.”

”I said it was a lively discussion,” he said. ”If you want to use other adjectives. …” He paused, then said, ”Lively is enough.”

Liberal Jewish news service JTA has said that Biden’s stance on Israel depends on the way the wind is blowing. They use this example from 2013:

Within two months in 2013, Vice President Biden spoke to AIPAC and then its bete noir, J Street, the liberal Jewish Middle East policy group. The thrust of his AIPAC speech at the beginning of March? Israeli leaders, including Netanyahu, want peace, and the Arabs need to step up.

“Israel’s own leaders currently understand the imperative of peace,” he said. “Prime Minister Netanyahu, Defense Minister Barak, President Peres — they’ve all called for a two-state solution and an absolute secure, democratic and Jewish state of Israel to live side by side with an independent Palestinian state. But it takes two to tango, and the rest of the Arab world has to get in the game.”

The thrust of his J Street speech, mid-April? Netanyahu was taking the country in the “wrong direction.”

“I firmly believe that the actions that Israel’s government has taken over the past several years — the steady and systematic expansion of settlements, the legalization of outposts, land seizures — they’re moving us and, more importantly, they’re moving Israel in the wrong direction,” he said.

At times during his Senate years, Biden repeatedly botched easy ways to at least appear pro-Israel. He didn’t sign his name to non-binding pro-Israel letters that were supported by the overwhelming majority of his senate colleagues.

Two months before Biden was elected vice president, the Jerusalem Post reported this:

Army Radio reported that the Delaware senator was heard saying in closed conversations with Jerusalem officials three years ago that he was firmly opposed to an attack on Iran’s nuclear facilities. Biden, the chairman of the Senate Foreign Relations Committee, reportedly claimed that Israel would likely have to come to terms with a nuclear Iran

Robert Gates was correct when he said Biden was a foreign-policy screw-up. Regarding Israel, his positions are strange and inconsistent. Is it that he is too lazy to understand, not smart enough, or trying to satisfy different constituencies? In the end, it doesn’t matter because if he is all over the place regarding America’s number one ally in the Middle East, how can he be trusted to run our foreign policy? 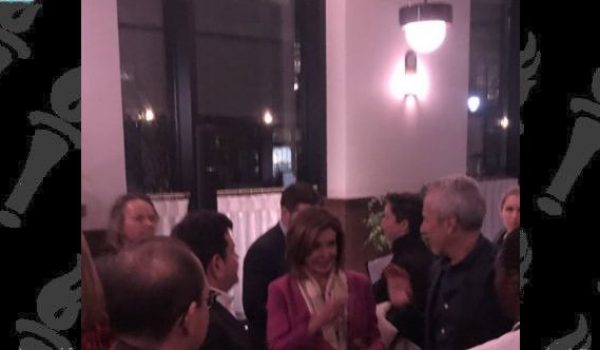 During Iran’s retaliatory bombing, Pelosi was at the opening of a fancy restaurant in D.C.
Next Post
Meghan Markle and Harry stepping back as ‘senior’ members of Royal Family