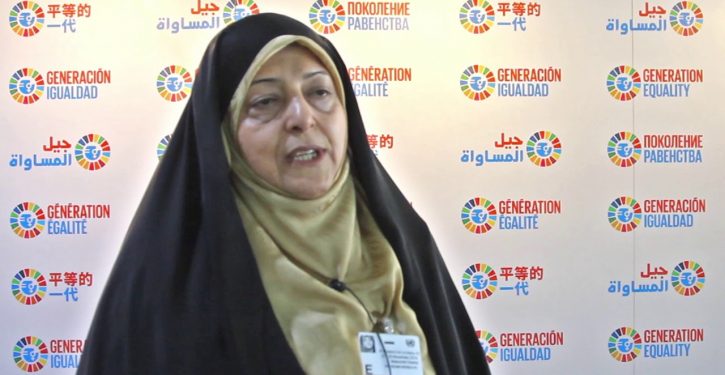 Between its crumbling ratings and paying out an undisclosed sum to Covington Catholic school student Nick Sandmann, who the network wrongly accused of taunting an Amerindian activist, CNN is still finding time to provide its viewers with quality entertainment.

Take its interview with Iranian Vice President Masoumeh Ebtekar, whom anchor Christine Amanpour provided with a 16-minute platform from which to tell the “other side” of the story of Qasem Soleimani’s untimely death. In the interview, Ebtekar claims that the drone strike that took out the Quds Force commander who orchestrated terrorist attacks was itself an act of terrorism and that Soleimani was — to borrow the words of U.S. presidential hopeful Elizabeth Warren — “a high-ranking military official for the government of Iran.” Amanpour offers no pushback to the characterization.

But it turns out that Ebtekar is not exactly free of blood on her own hands. At 0:26 in the video that follows, a scene from a 1979 interview with Ebtekar is spliced in. Back then she was a spokeswoman for the the Muslim Student Followers of the Imam’s Line students, the group that occupied the U.S. Embassy and held 52 Americans hostage for 444 days. In the clip, she is asked whether she would be willing to kill the hostages in the event of a rescue attempt. “Could you personally lift up a gun and put it to the head of one of these people and kill him?” she is asked.

Her answer is a simple and direct “yes.”

LOOK AT WHO @CNN IS USING AS A COMMENTATOR! THE VP OF IRAN! WATCH AND RETWEET THIS 39 SECOND CLIP THAT SHOWS THE TRUE FACE OF CNN! pic.twitter.com/PNID2ltUEz

Trending: The Iranian ships that talked too little

Meghan McCain confronts Warren on Soleimani: Why is it ‘so hard to call him a terrorist?’
Next Post
‘I am a boy’: Transgender teen sues New York to change birth certificate