Oh, the humanity! Iran’s President Hassan Rouhani has confessed that President Trump’s strict sanctions have cost his country $200 billion, effectively wiping out the assets provided by the Obama administration. “Sanctions have deprived the Islamic Republic of $100 billion in oil revenue in the last two years and an equal amount in foreign investment credit,” Bloomberg News reported, citing Rouhani’s official website.

Trump signed a resumption of U.S. sanctions in 2018 following withdrawal from the one-sided Iran nuclear deal, which had lifted them previously. “The last set of sanctions lifted under the terrible nuclear deal will come back into force,” Trump announced in a statement, further warning Iran to “abandon its destructive behavior or continue down the path toward economic disaster.”

The $200 billion hit to Iran’s economy effectively wipes out the $150 billion in assets that were held in overseas accounts and sent back to Iran, a process put into motion by the nuclear deal. It also negates the nearly $2 billion the former president used as leverage to ensure the release of three American prisoners. Money which “was flown into Iran on wooden pallets stacked with Swiss francs, Euros, and other currencies,” CNN reported at the time.

These funds have reportedly been used to finance terror operations, possibly even earmarked for militia strikes including one in which a rocket was fired at an Iraqi military base last week, killing an American contractor, as well as this week’s embassy attack in Iraq.

No doubt Iran would prefer pallets of cash, ala Obama, but a threat from a President with cojones will do the trick!

And it’s a lot easier on the American taxpayers!

Thanks to the best President EVER! President Trump!🇺🇸

Iran Not Dealing With a Patsy Anymore

The State Department explained this past April that sanctions on Iran are designed to “deny the regime the revenue it needs to fund terrorism and violent wars abroad.”

By contrast, the Obama State Department was more than willing to fork over money to a regime whose modus operandi is to cause “death to America,” literally doing so by sending them pallets of cash. Obama even went so far as attempt clandestinely to give the regime temporary access to U.S. banks.

Also clear from the story that top Obama administration officials lied about these decisions. Important with Obama, as with Trump, to use that word when it applies. They lied. https://t.co/6VkuImGByk

“The Obama administration during the negotiation of the Iran deal misled the American people,” Ohio Sen. Rob Portman charged. “I think they did so because they were desperate to get a deal.”

Under Obama, Iran was receiving a multitude of economic benefits as well as being granted a pathway to a nuclear program. The current president is wiping all that out. 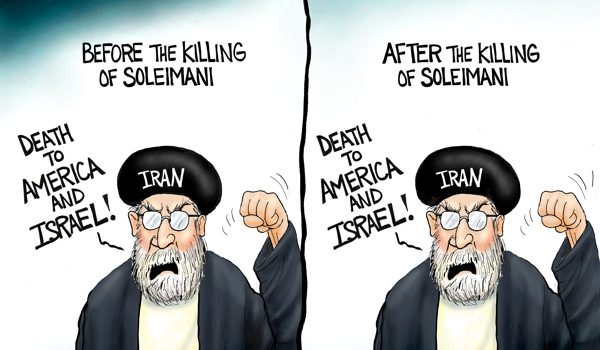 Cartoon of the Day: The more things change…
Next Post
Customs and Border Protection denies viral news it’s been ordered to detain Iranians