Customs and Border Protection (CBP) is denying that it has been ordered to detain and refuse entry to Iranian-Americans, refuting claims that have been promulgated by Democratic lawmakers and others on social media.

CBP, the agency within the Department of Homeland Security tasked with managing immigration into the U.S., released a statement Sunday evening, declaring as “false” reports saying its agents have been directed to detain and deny entry to Iranian-Americans.

“Social media posts that CBP is detaining Iranian-Americans and refusing their entry into the U.S. because of their country of origin are false. Reports that DHS/CBP has issued a related directive are also false,” the agency said in a statement Sunday.

The statement followed massive circulation on social media that CBP has been detaining individuals of Iranian origin at the Canadian border. 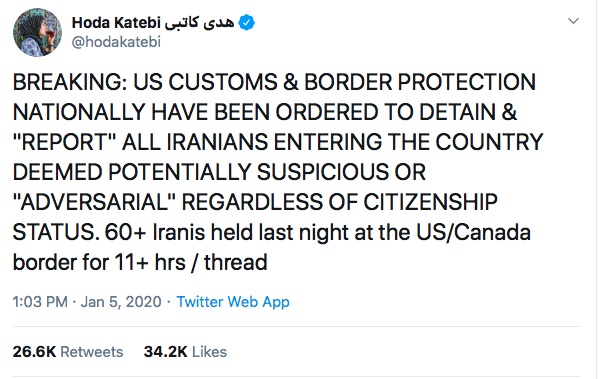 “BREAKING: US CUSTOMS & BORDER PROTECTION NATIONALLY HAVE BEEN ORDERED TO DETAIN & ‘REPORT’ ALL IRANIANS ENTERING THE COUNTRY DEEMED POTENTIALLY SUSPICIOUS OR ‘ADVERSARIAL’ REGARDLESS OF CITIZENSHIP STATUS. 60+ Iranis held last night at the US/Canada border for 11+ hrs / thread,” read a tweet from Hoda Katebi, a self-described political fashion writer.

As proof of her claim, Katebi issued a press release alongside the Council on American-Islamic Relations’s (CAIR) Washington state chapter. The press release stated it was assisting more than 60 Iranians and Iranian-Americans who were being detained and questioned at the Peace Arch Border Crossing in Blaine, Wash., while others were refused entry altogether.

Citing a single source within CBP, the CAIR press release went on to say the Department of Homeland Security “issued a national order to CBP” to “detain anyone with Iranian heritage entering the country who is deemed potential suspicious or ‘adversarial.’”

These claims went viral, and appeared to attract public statements from at least two Democratic lawmakers.

“Deeply disturbed by reports that Iranian Americans, including U.S. citizens, are being detained at the Canadian border with WA State,” tweeted Democratic Washington Rep. Pramila Jayapal on Sunday. Her tweet received more than 10,000 retweets as of press time.

Deeply disturbed by reports that Iranian Americans, including U.S. citizens, are being detained at the Canadian border with WA State.

My office has been working on this all morning. Please contact us with information on directly affected people at WA07PJ_casework@mail.house.gov.

People of Iranian descent — including American citizens & green card holders — are reportedly being detained by CBP officials. We can’t let this stand.

If you or someone you know has been targeted or detained by CBP officials, please contact my district office at 510-763-0370.

Both lawmakers encouraged the public the contact their offices if they had more information. 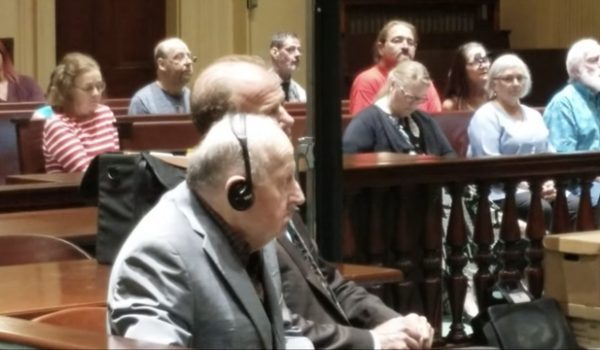