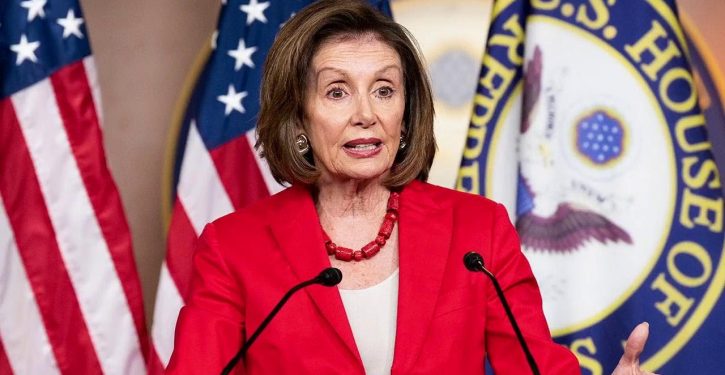 Last week Nancy Pelosi responded to a question asking if her support of impeachment was based on hatred of the president by suggesting that ascribing hate to someone’s motives or actions, was an ugly, non-Christian thing to do. The House Speaker even referenced her Catholic faith, telling reporter James Rosen, who had asked the question, “I resent your using the word hate in a sentence that addresses me. I don’t hate anyone. I pray for the president all the time. So don’t mess with me when it comes to words like that.”

No sooner had “Don’t mess with Nancy” sweatshirts gone up for sale on the speaker’s website than a video has emerged in which Pelosi leveled the very same accusation against Republicans during the impeachment of Bill Clinton. The hypocrisy is rich.

December 18, 1998 – @SpeakerPelosi on debate of Clinton impeachment: "We are here today because the Republicans in the House are paralyzed with hatred of President Clinton." pic.twitter.com/f3IQuIST2P

Pelosi isn’t the only Democrat who has been caught in complete reversal mode since 1998. House Judiciary Committee Chairman Jerrold Nadler, who has been a driving force behind the Democrats’ push to impeach President Trump, in 1998 claimed the process was essentially an “undoing of a national election,” designed to tell American voters that their choice for president “must be set aside.”

“The effect of impeachment is to overturn the popular will of the voters,” Nadler said at the time. “We must not overturn an election and remove a president from office.”

While Nadler, Pelosi, and fellow Democrats now claim impeachment is a serious matter to be conducted in an atmosphere of humility and sobriety, they didn’t think that way in 1998. Instead, Democrats cheered Clinton on the very day he was impeached.

“When he [Clinton] finished he walked slowly up the Democratic side of the aisle, Democrats applauding him and hugging him as he moved along,” the New York Times reported then. “The Republicans remained fixed in their seats.”

Where was the humility?