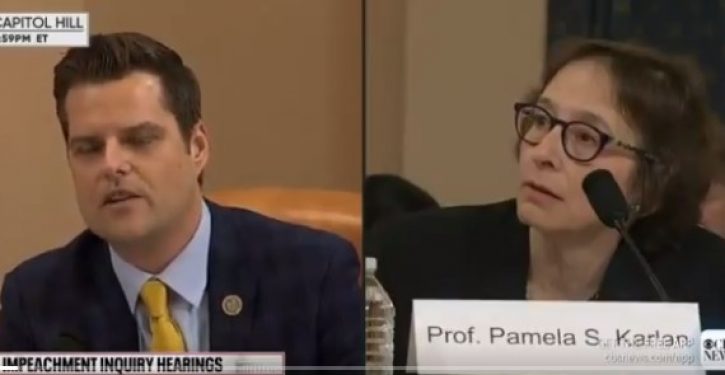 During last week’s testimony before the House Judiciary Committee by constitutional law “experts,” it became fairly obvious early on that Pamela Karlan of Stanford Law, the lone woman on the panel, was not terribly fond of Donald Trump. But is her problem with the president limited to the fact that he is a Republican while she is hard left, having donated large sum to the campaigns of Elizabeth Warren, Barack Obama, and Hillary Clinton? Or does it extend to the fact that he is a white straight male?

You can find an answer to both questions in the video that follows. In it Karlan rails out at the “rich, pampered, prodigal, sanctimonious, incurious, white straight sons of the powerful,” simultaneously making a pitch on behalf of “us,” referring to “snarky, bisexual Jewish women.”

👉🏻Here’s the ‘Constitutional Expert’ Prof. Pamela Karlan, @RepJerryNadler’s pal, ranting about how she dislikes straight white ppl. According to her, unless you’re a bisexual Jew woman, YOU mean nothing.#VoteRed2020
pic.twitter.com/MpRQgYgFFJ

North Dakota county debating becoming first to bar new refugees
Next Post
It has come to this: Ted Cruz is Putin’s stooge