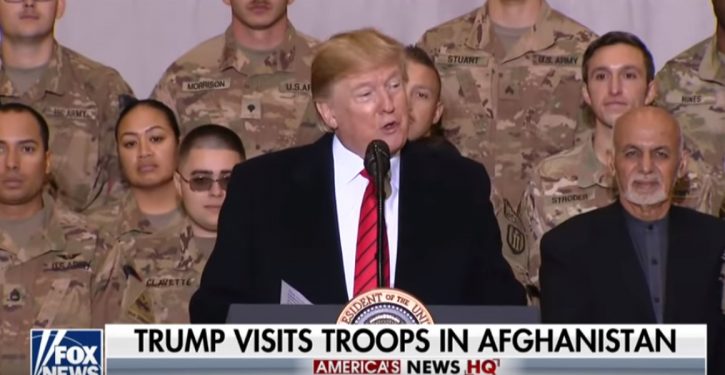 Trump addresses the troops at Bagram Airfield in Afghanistan during surprise Thanksgiving Day visit. President Ashraf Ghani of Afghanistan is behind Trump in the image. Fox News video, YouTube

President Trump made an unannounced visit to U.S. troops at the base in Bagram, Afghanistan on Thursday, apparently a triumph of “operational deception” (OPDEC) that kept the media gathered at Mar-A-Lago in the dark until the president made his appearance on the other side of the world.

Because of the inherent danger of the Afghan combat zone, keeping Trump’s movements obscured was necessary.  On Tuesday, he had flown to Florida from Washington, D.C. on an Air Force One airframe, which remained parked near Mar-A-Lago throughout the Afghan excursion.  According to news reports after the fact, he was transported by separate means to embark inside a hangar – at an unnamed location – on another Air Force One, which took off for Asia at night, in a darkened state.  A small media pool, assembled without the knowledge of the media doing the main coverage of Trump’s Thanksgiving activities, went with him, along with a handful of other officials.

But most of the media coverage remained in place in Florida.  At Mar-A-Lago, some social media sources suggested that a decoy convoy appeared to ferry Trump to the golf course on Thursday.  (I could find no confirmation of that.)  At least some news outlets seemed to believe Trump was indeed playing golf.  (Trump did play golf on Wednesday.)

Thursday morning updates in the U.S. informed news audiences that Trump would be having a family dinner at Mar-A-Lago and would talk to deployed troops via teleconference.

Instead, he had been spirited out of Mar-A-Lago Wednesday evening.

Savvy readers might wonder why I am going over this as if it matters very much.  Of course the president’s travel arrangements had to emphasize secrecy and OPDEC.  What’s the big deal?

The big deal is that it remained a secret.  The trip was in planning for weeks.  But it was never leaked.

It’s worth contemplating the point that officials in the Trump administration can keep a secret.  I suggest thinking about that for a moment.

Suppose it means that Trump and his officials can keep other secrets as well.  The mainstream media depict the administration as a chaotic shambles that leaks like a sieve.  But if it’s not, then a lot of things many people think they know are not really true.

It’s not just that the mental image of the administration, as sold to the public, is inaccurate.  It goes beyond that.  It means things people think they know from “leaks” are in all likelihood not leaks at all.  They weren’t leaked by insiders who know what Trump’s or his top officials’ real views, body of knowledge, and policy intentions are.

Many things “leaked” to the media could well be – and probably are – stories planted through the media to shape a narrative about the administration and its doings.

Some of them may be based on things like the actual intelligence assessments of mid-level analysts, and the actual views urged on the chain of command by senior civil-service officials.  But that doesn’t mean they tell us anything about Trump or his top appointees.  They’re not meaningful leaks, in that sense.  They’re information warfare from inside the executive bureaucracy.

Again, I suggest thinking about the implications of this.  Many readers will say they already understand it.  But I’m not sure most have really grasped the import of it.  If the Trump administration can keep the secrets it really wants to – keep those secrets from a legion of bureaucratic information warriors – then as much as 80% or 90% of what people think they know about Trump and his administration, from those “warriors,” isn’t fact-based.

The “warriors,” acting as media sources, don’t actually know the facts.  They’re just retailing a narrative, one that doesn’t get routinely countered point-by-point for the public.

It’s probably not countered because it would be an utter waste of time for the administration to get up every day and wear itself out demonstrating that a whole bunch of “leaked” misrepresentations are untrue.  They’d get nothing else done.  Fiction-leaking is cheap; it costs nothing to keep doing it constantly.  Debunking “leaks” with facts is tail-chasing, time-consuming, distracting, expensive.  It would also sometimes entail untimely disclosures of things that aren’t being discussed publicly for a reason.

But the bottom line from this episode is that no one in the media who desperately wants to expose the administration through leaks had a contact with the access to know this trip was being set up.  The media were caught off guard.  That should put a lot of other things in perspective.

The other point to ponder comes from the policy announcement Trump made during his address to the troops.  He said talks could resume with the Taliban soon, something that many among even Trump’s conservative supporters think is a bad idea.

(The Left would think it’s a good idea – “smart power” – if a Democratic administration were pursuing this course.  They don’t think Trump can possibly be doing it correctly, however.)

The policy of holding talks with the Taliban inherently sits wrong with me, for one.  It certainly doesn’t sound right.  The Taliban are terror brigands.  You don’t try to settle things with them through talks.  They’ll just string you along in talks to keep you paralyzed and themselves in the driver’s seat, terrorizing and slaughtering people.

But a key problem with this normally hard-headed and realistic insight is that where Trump has moved in contravention of it, he’s been having a most salutary impact.  The Korean Peninsula is one far-reaching example. The biggest thing that has come of Trump’s opening with Kim Jong-Un is the least understood, and it’s this: China has been excluded from the geopolitical structure of the problem.  The U.S. no longer seeks China’s assistance with every overture to North Korea.  That pattern is permanently broken.

It has rattled China to the core, especially in conjunction with Trump’s ruthless approach on trade negotiation, and his refusal to accept any of Beijing’s attempted ukases on maritime usage in the South China Sea.

Trump’s overall posture and attitude have given the other nations of East Asia reason to behave as if they are freed from a subservient fate to a more obtrusive Chinese hegemony.  That hasn’t made them belligerent, but it does give them – e.g., Japan, the Philippines, Vietnam, Thailand – a courage that China would prefer they lacked.

Much more could be said about that (such as a discussion of how Russia and China are both trying to incite Kim to breach his containment).  But to keep it brief, I want to return for a moment to the talks with the Taliban.

Trump used the same kind of language to outline his approach with the Taliban that he used about Kim Jong-Un, indicating that it was basically up to the Taliban whether they would meet the behavioral expectations he had for them, if the U.S. were to negotiate.  Trump’s wording indicated he’s willing to walk away.

Consider some very big things the direct-talks approach does.  It removes Pakistan as the spoiler or veto-holder over relations with the Taliban, in a way similar to removing China as a tollgate to North Korea.  It gives the Afghan regime a framework to act in, in which it is not existentially beholden to Pakistan, Iran, or another outside actor (like Russia).

None of the first-order effects means that a solution will be immediate.  But dealing directly with the Taliban knocks the whole situation off top dead center, rendering moot any prospect of returning to the dysfunctional approaches of the last 18 years.  No one would want to return.  Those approaches led nowhere before, and as conditions change, they will be even less appealing.  Like the old “Six Party talks” structure with North Korea, they will fade away from complete obviation.

Five or six years ago, I wrote quite a number of times about the effect of a collapsing Pax Americana.  As the structure of the Pax collapsed under Obama, the world’s regional powers saw unguarded boundaries emerge: structural components of the geopolitical order that they could push at for their gain.  We’ve seen that the world over in the years since, especially from Russia, China, and Iran.  It was also the basis for the early success of ISIS.

But Trump has the remarkable effect of being a more agile innovator in exploiting the collapse of the Pax than even the hard-working Asian trio.  In some ways, he’s inside their OODA loop without even seeming to try.

He keeps confounding the expectations of justly venerated experts by busting the big post-1945 paradigms.  He does three things, or four, that aren’t supposed to “work” at all, and it sets everyone else scurrying – not to line themselves up for the easy attacks or summary conclusions predicted by pessimistic experts, but to dog-paddle anxiously, with their previous network of expectations and buoy-markers disrupted.

Trump has no hegemonic aspirations, no interest in breaching borders by force majeure, but is a better pusher of structural boundaries than the aspiring hegemons.  It would take a whole separate series of posts to analyze how he comes to be such an actor on the current scene.  But so he is.

I don’t find it wise to keep assuming that our old expectations will prove out, as regards Trump’s policy actions and the course on his watch of evil situations.  They never do prove out.  It’s time for us to learn that our eyes are often looking for the wrong things.

We keep thinking the world is locking itself into an armed-bloc alignment pattern from nearly 90 years ago – yet the reality, as we see in the streets from Central America to Paris to Tehran and Hong Kong, is that the world is breaking wider open every day.  Somehow, America ended up with a president who is uniquely suited to deal with that, in a way that does the one thing everyone needs the most: it keeps the bad guys off balance.

VIDEO: A preamble to the next round of impeachment hearings
Next Post
Open Thread (11/29/19)