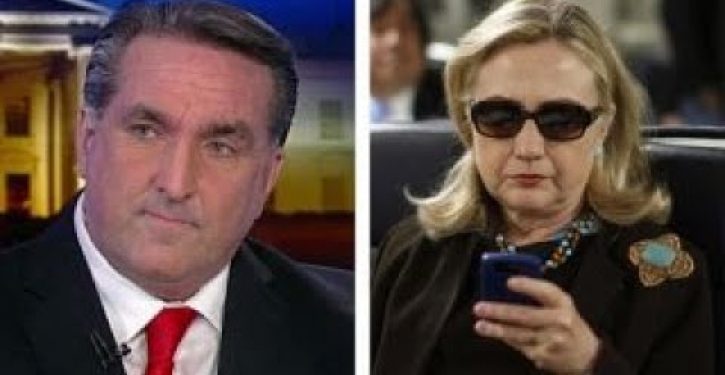 The Intelligence Community Inspector General — whose office performed some of the most important work on the probe into Hillary Clinton’s use of a private email server — suspected someone on his team was leaking information, Senate testimony shows. His counsel was tied to the Clintons.

The suspected mole is now working for the Trump administration in at the Office of the Director of National Intelligence (ODNI), according to the testimony.

After returning from the State Department, an ICIG investigator noticed a Jeep that began tailing him and his colleagues and even rummaging through recycling, according to testimony in a Senate report by GOP Sens. Ron Johnson of Wisconsin and Chuck Grassley of Iowa released Wednesday.

ICIG Charles McCullough, an Obama nominee, said he was eventually pushed out of federal service under pressure from California Democratic Sen. Dianne Feinstein and others.

An investigator for the ICIG, Frank Rucker, told Senate investigators the office suspected their ICIG colleague Paul Wogaman, the son of the Bill and Hillary Clinton’s longtime pastor and adviser, was leaking.

He is the son of Rev. J. Philip Wogaman, who during the Clinton presidency, was pastor of Foundry United Methodist Church, which the Clintons attended.

In 1998, the Weekly Standard reported that “Bill and Hillary Clinton have found themselves an awfully sympathetic minister — the Rev. J. Philip Wogaman, who presides at a Methodist Church a few blocks from the White House. Wogaman has recently sounded less like a clergyman than a purveyor of the Clinton line.”

On Feb. 9, 2016, Clinton’s lawyer David Kendall wrote to Cheryl Mills, another top aide and lawyer: “Just talked to [redacted] — about our favorite son. He’s meeting with OSC today, which is good and a step in the right direction, but nothing yet public. [Redacted] said she’d heard — but second/third hand (and not from son) that IC IG was handing out anti-HRC clips to journalists. Have we gotten any inkling of that happening? I certainly haven’t, and it seems weird.”

Mills forwarded the email to John Podesta, Brian Fallon and other Clinton aides.

The Senate report says Rucker told them Wogaman was “the only male employee on leave the following day when a meeting with [redacted] was supposed to take place according to the email. Therefore, he said, it was believed that Mr. Wogerman [sic] was leaking to [redacted].”

Kendall did not return a request for comment from the Daily Caller News Foundation about his “favorite son.”

Wogaman also did not return a request for comment from the DCNF.

Wogaman now works for the Office of the Director of National Intelligence in the Trump administration, according to the report.

His Facebook page is peppered with apparent anti-Republican comments. His profile photo is a picture mocking “thoughts and prayers” as an alternative to “do something,” a popular liberal meme about gun control. He makes a reference to “bone spurs,” a common jab at President Donald Trump. The ODNI did not return a request for comment.

Rucker also told investigators for the Senate as well as Department of Justice IG investigators that he and others at the ICIG believed they were being followed, and that someone went through McCullough’s recycling bin.

“He said that a Jeep once followed the ICIG (McCullough) from the State Department to the door of house. Mr. Rucker said that he himself had a Jeep following him at odd hours. He said that for two weeks, the same Jeep followed him on Route 50,” the Senate report said.

“Mr. Rucker said that he cannot recall the exact timeframe of when this occurred, nor did he record the Jeep’s license plate. He said that Mr. Hackett had a burglary at his home and all of his computers were stolen,” it continued. “He said that Mr. McCullough discovered that someone was sorting through his recycling bin at home and leaving separate stacks of items outside of the bin as if they were looking for papers.”

Texts between Peter Strzok, the anti-Trump FBI agent in charge of the Clinton probe for the bureau, and his mistress indicate that the FBI was ready to close the investigation of Clinton’s server before the ICIG flagged something major that the FBI missed: some emails were explicitly marked classified with markings such as (C), something that could have been detected with a simple search.

“If the FBI missed this, what else was missed?” Strzok wrote. (RELATED: FBI Officials Missed Affair Right Under Their Noses)

In late 2017, McCullough took the unusual step of coming forward publicly to say that he “expected to be embraced and protected” for doing his job by calling attention to violations of classified information policy, but that instead he was pressured with an “adversarial posture” from Feinstein and others after he began raising the alarm to then-Director of National Intelligence James Clapper.

At nearly the same time as the email about the ICIG, Podesta and Fallon also lashed out at the State Department’s inspector general after it called attention to Clinton’s server use.