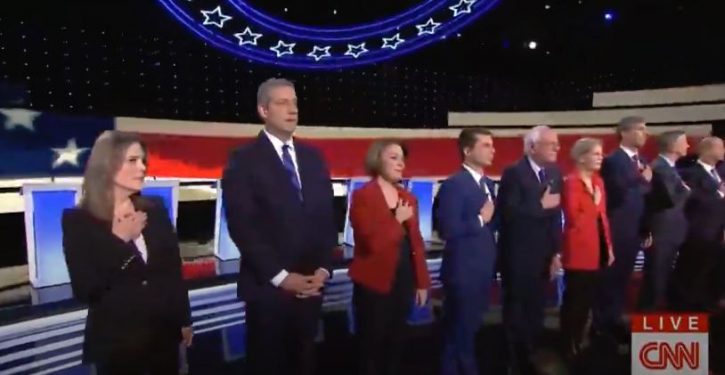 There were plenty of noteworthy lowlights in last night’s Democratic presidential debate. One came when Sen. Elizabeth Warren chastised the crowd for laughing as she recited a sad health care anecdote, telling those assembled, “This isn’t funny.” (Moral: Some people — even would-be Amerindians — are lousy storytellers.)

But not all of the lowlights were verbal. One that is generating a good bit of commentary this morning is the failure of Ohio Rep. Tim Ryan (who?) to place his hand over his heart during the singing of the national anthem. (Although it is going largely without mention, presidential contender Marianne Williamson also began with her hands folded in front of her but self-corrected partway through the performance. Check out the “before” and “after shots below.)

Among those who commented on the snub or gaffe — it’s still unclear which it was — were Ari Fleischer, former press secretary for President George W. Bush, who tweeted:

Rep. Tim Ryan didn’t put his hand over his heart during the national anthem. I guess he’s appealing to the Kaepernick wing of the Democratic Party.

Is Tim Ryan trying to get talked about on Fox News by not putting his hand on his heart during the anthem? Or is he making a subtle play for the super far left vote? #DemDebate

Remarkably, no one appears to have commented on another presidential candidate who also failed to place his hand over his heart during the playing of the national anthem. He went on to become president: 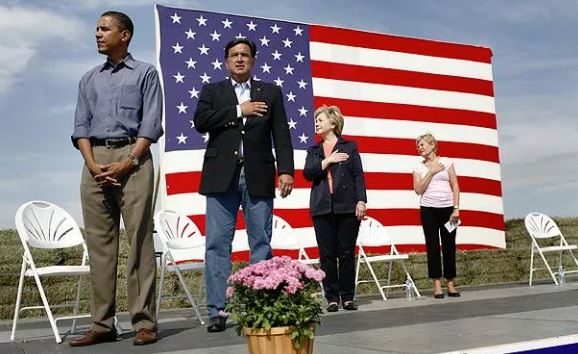 What surprises me is that with all those socialists on stage last night, no one complained about the decision to perform the anthem in the first place. Have they forgotten that the anthem is racist and a form of “nationalistic indoctrination”? That the poem “The Star-Spangled Banner” is itself so offensive that in 2017 the California NAACP proposed dumping it in favor of something else?

Warren scolds debate crowd for laughing at sad health care anecdote; ‘This isn’t funny’
Next Post
Media: Trump’s claim he was at Ground Zero in aftermath of 9/11 is a lie. Wanna bet? 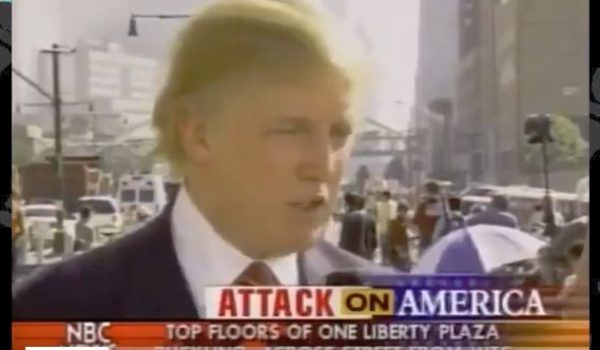