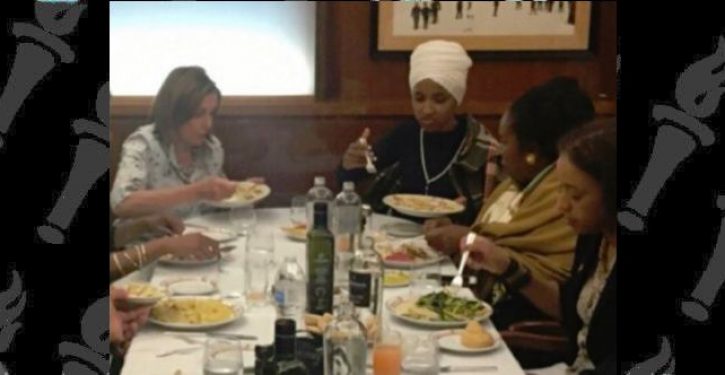 All work and no play. In case you don’t have a copy of her daily itinerary, Nancy Pelosi is in Africa with a delegation of black Congress members. All are in Ghana “for high-level talks and a commemoration of the 400-year-old slave trade from Africa to the New World,” according to Voice of America.

The trip from D.C. to Ghana nonstop takes more than ten hours, so Pelosi decided to break the trip up with a stopover … in Venice. There she and her crew enjoyed a little lunch at Cipriani, a spinoff of Harry’s Bar, which Ernest Hemingway frequented once upon a time. Cipriani is expensive — so much so that the prices do not appear on the online menu. (If you have to ask, you can’t afford it.)

Here’s Nancy Pelosi, the Squad and Elijah Cummings (just out of the picture) having an extremely expensive lunch at the renowned Harry Cipriani in Venice, right near their 5 star hotel, while their constituents are living in squalor. Inequality??: pic.twitter.com/0hpGG4YoHO

Since the trip was on the taxpayer’s dime, you might figure the group would economize on other meals. And you’d be wrong.

Spotted: @SpeakerPelosi at the Restaurant Terrazza Danieli, the 5-star rooftop resto atop the Hotel Danieli in Venice. Italy. Pelosi’s office announced Fri. she would lead a congressional delegation to Ghana & visit the US Army Africa headquarters in Italy ?? this week. pic.twitter.com/H8m7ndqLJ4

Aren’t Democrats the ones who care so profoundly about the poor American working class, who is forced to settle for “crumbs” from the Trump tax break?