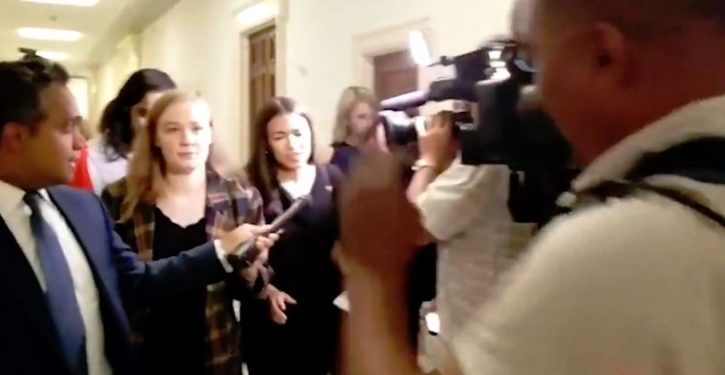 It sure seems like a simple question: Will you condemn a terrorist attack on an ICE facility?

And yet, three members of Alexandria Ocasio-Cortez’s newly anointed “Squad” were unable to answer in the affirmative, despite repeated attempts to coax a condemnation out of them. Ocasio-Cortez (D-N.Y.), Ilhan Omar (D-Minn.) and Ayanna Pressley (D-Mass.) all refused to answer the question put before them.

On Saturday, Willem Van Spronsen, a self-identified (according to his manifesto) member of the left-wing Antifa movement, was shot and killed when he stormed an ICE center in Tacoma, Wash.

Van Spronsen was armed with flares and a rifle, attempted to ignite a propane tank in the hopes of burning the center down, and published a manifesto prior to the attack echoing Ocasio-Cortez and her incendiary “concentration camps” rhetoric.

When asked about the attack, Omar refused to say a word.

No surprise there: Omar was also unable to answer the questions “Are you a communist?” and “Do you support al-Qaeda?” at the press conference the Squad held Monday afternoon. (Granted, we know the answer to those questions, but still, it would have been nice to hear something from the congresswoman.)

Pressley, likewise, was unable to find the words condemning a terrorist attack. “Really simple question,” a reporter begins. “Will you condemn Antifa for attacking an ICE facility? Will you tell Americans not to attack violently ICE facilities?  It would be a very simple thing to say,” he adds.

Pressley does speak up at length but only to mock the reporter: “What I’m condemning is a lack of journalistic integrity.”

He fires back, “I’m just asking the questions CNN won’t.”

Last but not least is the leader of the Squad, Ocasio-Cortez, the woman whose “concentration camp” rhetoric about detention centers may well have inspired the actual attack itself.

.@AOC refuses to condemn the Antifa attack on the Tacoma ICE center; refuses to tell @TheRealKeean if her inflammatory comments about “concentration camps” radicalized the attacker. pic.twitter.com/YOjn0yL032

It’s almost as if the Squad is saying, “In a confrontation between law enforcement at an ICE facility and a radicalized Antifa terrorist, that there are fine people on both sides of the issue.”

In the meantime, we’ll let comedian Ricky Gervais explain to the ladies of the Squad exactly how easy it is to condemn violent leftists:

Whatever side you’re on politically, ‘left’ or ‘right’, you don’t need violent factions joining you or representing you. They bring your cause into disrepute. They don’t even care about your cause, they’re just in it for the violence. Denounce them.

Are Ilhan Omar’s words those of a patriot who loves America?
Next Post
‘Racist’ tweets? News media grapple with how to label Trump’s latest attacks