In a letter to Attorney General William Barr, Sen. Charles Grassley (R-IA) and Sen. Ron Johnson (R-WI), chairmen of the Judiciary and Homeland Security Committees, ask Barr to answer questions about passages in the Strzok-Page text exchanges that the public is seeing for the first time. (The texts have been available in redacted form, but what we get here is a view behind some of the key redactions.)

The letter was sent Thursday 25 April 2019.  But journalist Sara Carter, who broke the story, indicates she obtained the text messages on Tuesday (23 April), and had received related information last week.  Carter reproduces most of the letter in her article, but it has apparently not been posted publicly at this point.

The gist of the story is that Peter Strzok and Lisa Page exchanged emails in November 2016 that suggested Strzok was in communication at the time with Joshua Pitcock, a long-time aide to (then) Vice President-elect Mike Pence who later became Pence’s chief of staff.  Pitcock was a member of the Trump campaign staff in 2016, and then worked on the transition team.

The special feature of this connection is that Pitcock’s wife, referred to in the texts as “Katie,” was an FBI employee who until July 2016 had worked with Strzok on the Hillary Clinton emails investigation.

The concern of Grassley and Johnson is that Strzok seemed to be discussing an inappropriate connection with Pitcock, one that could have amounted to cultivating Pitcock as an inside source – effectively, a spy – against the Trump transition team.

Pitcock’s wife had reportedly recused herself from the Hillary investigation as soon as her husband’s boss (at the time, Trump) was made the Republican nominee for president, at the GOP convention in July 2016.  (Pitcock’s wife — she does not use his last name — is not named in either the senators’ letter or the story at SaraACarter.com, and although it isn’t hard to discover her full name online, I will follow suit and leave her as “Katie.”  The senators refer to her as “Katherine.”)

Presumably, her husband’s long connection with the vice presidential nominee also figured in Katie’s recusal.  Joshua Pitcock had worked for Pence at least back to 2009.  An authorization for a congressional trip he took in 2009 is archived at a watchdog site, signed by then-Congressman Pence.  Pitcock, as mentioned, worked on the Trump campaign staff and then had a role in the transition before becoming Pence’s chief of staff in January 2017.  He left that job in August 2017.

We don’t know Joshua Pitcock’s side of the story at this point.  But here are the texts, which discuss sending a representative to a meeting with the transition team, as reproduced by Sara Carter (the parenthetical commentary is by Carter.  All punctuation sic):

Strzok: Talking with Bill. Do we want Joe to go with Evanina instead of Charli for a variety of reasons?

Page: Hmm. Not sure. Would it be unusual to have [sic] show up again? Maybe another agent from the team?

Strzok: Or, he’s “the CI guy.” Same.might [sic] make sense. He can assess if there [sic] are any news [sic] Qs, or different demeanor. If Katie’s husband is there, he can see if there are people we can develop for potential relationships

Page: Should I ask Andy about it? Or Bill (Priestap) want to reach out for Andy (McCabe)?

Strzok: I told him I’m sure we could ask you to make the swap if we thought it.

The senators’ concern is obviously about the allusions to looking for “different demeanor” on the Trump team, and “developing relationships,” given that we know Strzok was running a counterintelligence operation against Trump and his political staff at that point.  Did Strzok envision using “Katie’s husband” – Joshua Pitcock – as a conduit to developing inside sources?  It does sound like it.  And did that mean Pitcock already was an inside source for Strzok?

Here for, reference, is a screen cap of the whole text passage in the redacted form in which it has been available since its release as IG material. (Screen cap courtesy Jack Posobiec.) 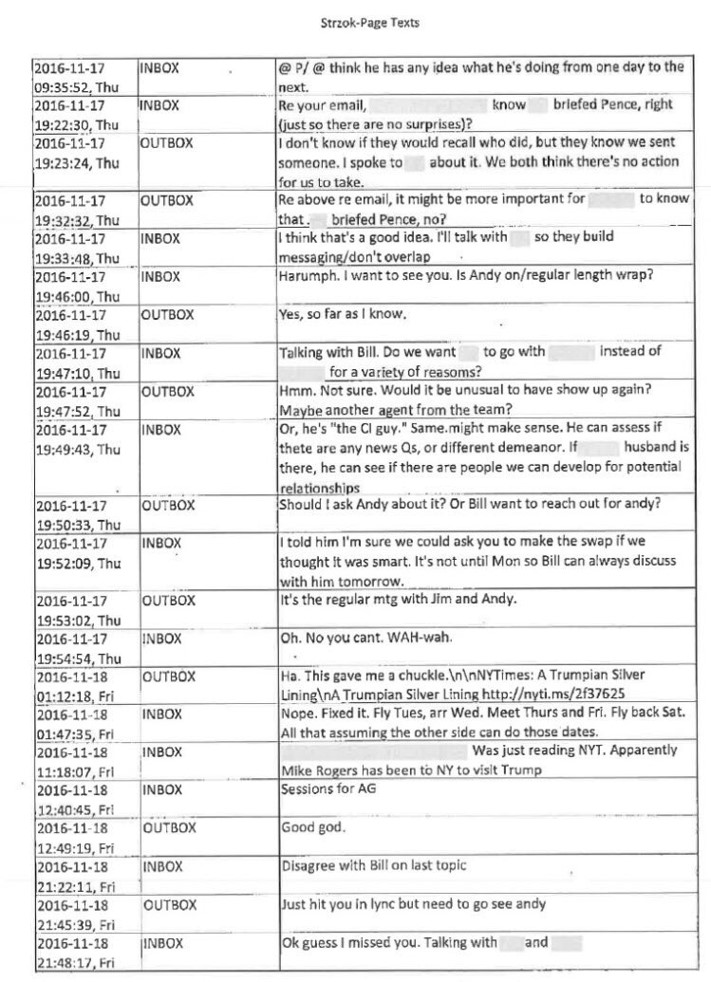 Photo of Pence with fmr Chief of Staff Joshua Pitcock who has been accused of spying on Trump for the FBI pic.twitter.com/jqAR9IdUFb

The answers to the questions above are unknown, but certainly urgent based on this text exchange.  Grassley and Johnson are calling the texts to Barr’s attention and requesting that he look into it, and get those answers.  The senators have requested Barr answer, at a minimum, the following by 9 May:

2. How many counter-intelligence briefings were provided to the Trump and Pence transition staffs prior to Inauguration Day? Please list the dates, all agencies involved, and each official that represented those agencies at the briefings.

3. Many of the FBI employees involved in these activities are no longer employed by the federal government. How will your review obtain information needed from these individuals?

4. Will you commit to providing the results of your review once completed?

5. What steps have you taken to investigate whether DOJ or FBI officials had unauthorized contacts with the media during the Russia investigation?

This breaking news on Spygate has more questions than answers right now.  One obvious set of questions would relate to Vice President Pence’s role in the sequence of events that culminated in Michael Flynn’s firing.

I see no reason to suspect Pence of bad faith against Flynn, and we know too little about Joshua Pitcock to make any claims at this point.  I advise against rushing to judgment on this.  But it is disconcerting to see, at this late date, how we keep being surprised with new pieces of information.  None of them seems to be better news.  Stay tuned.