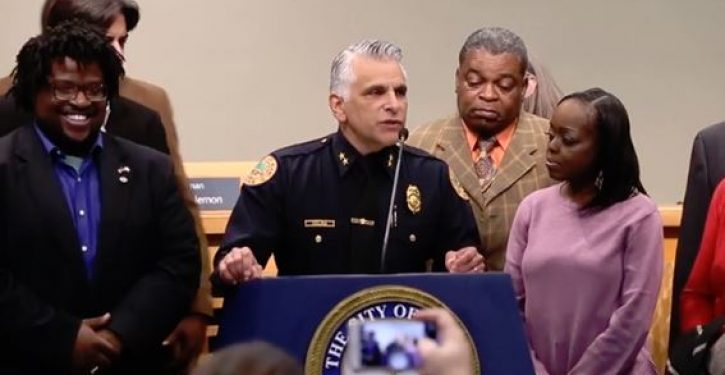 He’s not quite on a par with Travis County, Texas Sheriff Sally Hernandez, who puts sanctuary for illegal aliens above her own deputies’ lives, but Miami Police Chief Jorge Colina is equally undeserving of wearing a badge, much less heading a department.

Colina, a 28-year veteran who came to his job in January 2018 promising to “forge better partnerships with federal agencies,” recently put out the opposite message, telling Spanish-language radio station WURN:

I don’t care if you have papers or don’t have papers, where you came from, or who your parents are. That’s not my job.

One might reasonably argue that as head of law enforcement of a metropolis with the fifth largest illegal alien population in the U.S., at 600,000, that is precisely his job.

At issue is SB 168, a bill that if signed into law would prohibit sanctuary policies and require law enforcement to comply with federal Immigration and Customs Enforcement (ICE) detainer requests. As Fox News reports, Currently, an ICE detainer request is not deemed a requirement for local authorities.”

The decision to honor detainer requests is a hot button issue in the tug of war between the Left and the Right over the enforcement of immigration law. In October 2018, the American Civil Liberties Union of Montana filed a lawsuit against Lincoln County Sheriff Roby Bowe for detaining a criminal illegal alien in compliance with ICE.

In his interview with WURN Colina also said, “The truth is I’d prefer not to have this job if I have to ask fellow officers to go check where someone came from. …” The city of Miami might do itself and its legal residents a great favor by taking him up on his offer.