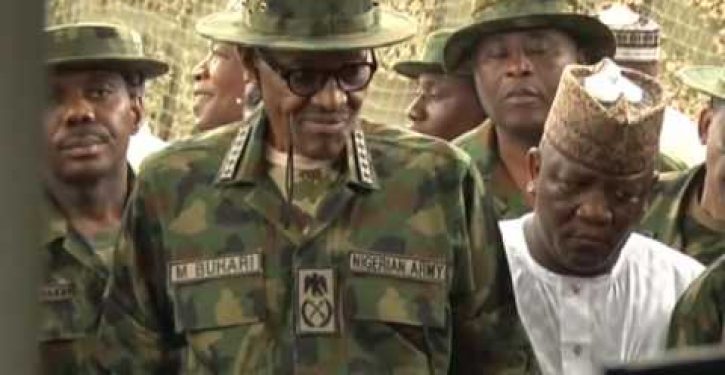 The Republic of Nigeria is at a crossroads. On Feb. 16 a presidential election was to be held. Three hours from the scheduled poll opening, the Independent National Election Commission (INEC) — the group that oversees elections — was forced to cancel the election. All People’s Congress (APC), the party of incumbent President Muhammadu Buhari, packed INEC and is appearing to do all it can to disrupt and intimidate the electorate to forestall an almost certain defeat at the hands of former Vice President Atiku Abubakar, a successful businessman and the People’s Democratic Party (PDP) candidate.

Nigeria may be days away from global disaster and a significant setback in the global war on terror that will make the recent events in Venezuela look like a garden party. The nation is home to Africa’s most feared and ruthless radical Islamist terrorist group, Boko Haram. Boko Haram became infamous for the appalling Chibok schoolgirls kidnapping in 2014. Over one hundred of the original 276 girls remain in captivity as sex slaves. Despite promises, the APC has done little to rescue the Chibok girls. Boko Haram has murdered over 20,000 Nigerians, most in the Muslim North and many since Buhari proclaimed their defeat in December 2015.

Greater threats exist to destroy Nigeria on the eve of its now postponed presidential elections. In the last few years roving militias have invaded the Middle Belt and slaughtered Christian farmers. The killings and displacements by the roving militias in the Middle Belt are estimated to be as high as twp million. The Buhari administration has stood silent, refusing to halt these murderous militias and their humanitarian and economic devastation.

Under Buhari’s watch, thousands of Igbos in the Southeast have been slaughtered by the Nigerian military and security officials in what appears to be a long-running genocidal and economic vendetta arising from the Biafran War, which ended in the early 70s after millions of civilian Igbos were starved. Pres. Buhari has again refused to act and is in fact currently the subject of an investigation by the International Criminal Court for genocide and crimes against humanity.

Civil strife is heading to a boiling point this week as the Nigerian people must again trek to the polls to attempt once again to cast their votes for president. Independent polls indicate that incumbent Buhari is expected to lose. Yet a free and fair election is looking unlikely. A governor of Buhari’s ruling party recently warned on national television that foreign nationals who sought to intervene in the presidential election would return home “in body bags.” Another publicly exhorted his supporters to “kill, kill, kill” anyone who did not vote for APC. Reports indicate that Buhari’s military prevented the dissemination of voting materials to seven states that Mr. Abubakar and the PDP are likely to win. There have already been reports of hundreds of civilian deaths at the hands of APC radicals.

In Buhari’s Nigeria, power has become concentrated in the presidency without checks and balances or a free press. President Buhari just weeks ahead of the election unconstitutionally replaced the chief justice of the Nigerian Supreme Court with a sycophant and has appointed his niece, who has no apparent credentials, as chairperson of the agency that tallies and reports election results. The appointment of the bumbling INEC board by Buhari speaks volumes. There seems to be little commitment to secure democracy for Nigeria under him.

Before 2015, no Nigerian incumbent had ever left office peacefully after an electoral defeat. Obama’s secretary of state, John Kerry, was dispatched to Nigeria on the eve of the 2015 election with the unfortunate result that Gen. Buhari was viewed as the “chosen” candidate. Defeated incumbent Goodluck Johnathan acquiesced to Buhari’s victory, a first in Nigerian history.

Based upon the urgings of Nigerian groups such as “We the People of Nigeria,” the current secretary of state, Mike Pompeo, spoke directly to the presidential candidates, imploring them to hold an election that is fair and free from violence.

A free and fair election will vaccinate Nigeria against terrorism and domestic disorder. The opposite result will be uniformly tragic as well as expensive for the United States in the form of increased military and humanitarian aid.

The people of Nigeria clamor for change and appear to want Atiku Abubakar to lead them out of poverty and skyrocketing unemployment with his slogan “Make Nigeria Work Again.”

There is perhaps reason to doubt that the election will be held. Buhari has previously engineered a military coup. Nigeria is sitting on a powder keg. It is not hard to imagine what will happen if the rescheduled Feb. 23 election is manipulated in favor of the incumbent. The geo-strategic area of West Africa will be convulsed if the upcoming election erupts in long simmering ethnic and religious bloodshed. Refugees on a scale that dwarfs Arab Spring could wreak havoc beyond the African continent.

The Trump administration must continue to stand taller and firmer than its predecessor in addressing geopolitical problems with fairness and strength. The communication from Secretary Pompeo is a good start that should be applauded and followed up with resolve to prevent the disintegration of Africa’s heart and soul.

Alyssa Milano advice to voters a day late and a dollar short
Next Post
Dick Blumenthal says public paid for Mueller report, therefore deserves to know what’s in it