I was always going to put up at least a brief post about Super Bowl LIII, because who isn’t rejoicing that there will be male cheerleaders in it performing all the same routines as the female cheerleaders?

For some reason, the two males on the Rams cheerleader squad don’t wear the little white shorts and go-go boots with the crop tops.

But there’s also a need to address this situation with the Rams’ prior agnosticism on going to the White House for a victory lap visit if they win.  (They’re under pressure from some vocal locals to bypass a White House visit.  There are also reports that the players have already taken a vote and the White House visit lost.)

What am I supposed to do, root for the Patriots?  I mean, for starters, they’re the AFC team.  So wrong.

For the record, I don’t want to hear from any teams that would reject visiting the White House to receive congratulations from any president.  It’s just so stupidly political.  I’m sorry to hear of individual players who don’t want to go; I recall some who didn’t want to go to the Obama White House, and there have been some who don’t want to visit Trump.  It seems unnecessary to me to take this stance, but, you know, whatever.  What really seems flaming, honking unnecessary is whole teams prioritizing politics over a sporting-minded unity and tradition.

Then there’s this business with Jeff Bezos paying for a much-hyped Super Bowl ad to celebrate the contributions of journalism.  The ad is formally sponsored by the Washington Post, but since the paper hasn’t had actual profits to pay for hyper-pricey Super Bowl ads with for more than half a century, it’s clear where the money is coming from.  It’s not coming from the Amazon retail enterprise either; it’s coming from Bezos’s real business, which is tracking the planet via Big Data, and now providing IT “cloud” management for a growing list of U.S. government agencies, including the Department of Defense and the intelligence community.  Yeah, that’s really a good idea: the Washington Post on one end, the CIA on the other, and Bezos-owned enterprises in the middle.

Just what the Super Bowl needs, since there isn’t enough political angst over the content of the half-time show and whether the penumbra of Kaepernick will be haunting the proceedings sufficiently if the subject isn’t brought up constantly by everyone short of Tony Romo.

Speaking of whom, who knew?  Tony and his prognostications are just about enough to watch the game for, in and of themselves.

Sigh.  I guess it’s the Patriots.  They’re favored by 2.5 in the line.  This is new territory here.  Feels really weird.  There’s a reasonable chance of actual football breaking out on the field.  Romo won’t steer you wrong; listen for his cues.  Talk amongst yourselves.  It’s our last hurrah until August.

A Super Bowl ad preview to entertain yourself with:

And another, general-interest image that may have more relevance, with a hat-tip to our correspondent  Walt Reed. 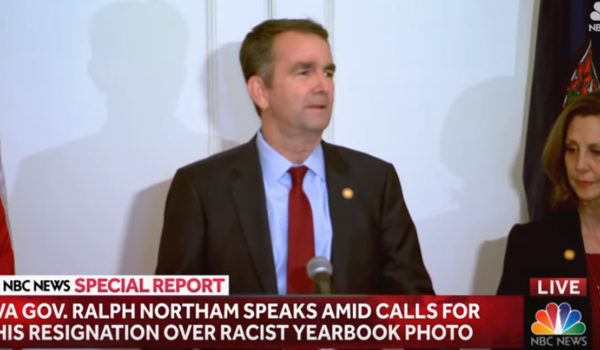 Northam offers head-scratcher of an alibi – and highlights Democrats’ biggest political need
Next Post
It’s come to this: WaPo has bought advertising air time during the Super Bowl