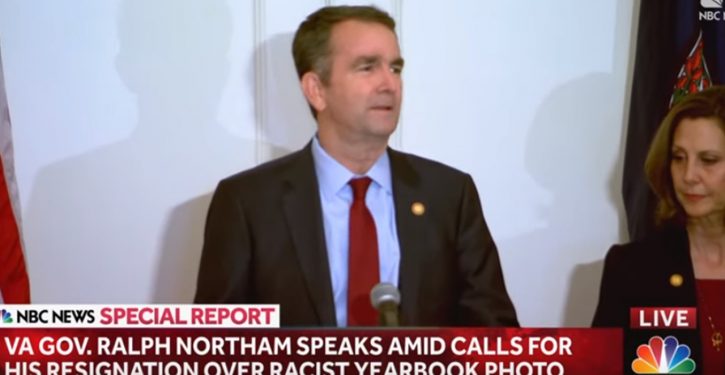 Not me; not resigning. NBC News video

On Saturday, Virginia Governor Ralph Northam retracted his previous admission from Friday, deciding after reflection that he was not in the photo that appears on his 1984 yearbook page depicting a man in black-face next to a man in a Ku Klux Klan outfit.  (See video at the bottom.)

Although it was never clear whether Northam was disavowing his appearance as either character, there were a couple of clues in his oddly worded, somewhat surreal disclosures after the night of reflection.

One clue was that he claimed to now have certitude about the 1984 photo because he had, in fact, performed that same year in a dance contest, wearing black-face to moonwalk like Michael Jackson.  Since that event was so – as it were – indelible in his hippocampus, it stands to reason that he’d remember if he were in the yearbook photo.

Right.  Well.  Aside from the unbearable inanity of that whole line of excuse, it’s at least not implausible that he was imitating Michael Jackson in 1984.  Jackson’s iconic “Billy Jean” moonwalk burst on the world in a TV broadcast in 1983, and was in fact wildly popular at the time.

Less credible is the implication lingering over this whole episode that in 2019, Ralph Northam has just seen his page in a 1984 yearbook for the first time.

But let’s keep going; we have to get through this.

Northam’s other clue is that he’s apparently investigating the use of facial-recognition software to prove he’s not in the infamous photo.  Since that wouldn’t apply to the guy under the KKK hood, it seems to clarify that what Northam is disavowing is the black-face appearance.  (And yes, the facial-recognition gambit is hilarious in its own right.)

If you’ve reached the saturation point on this ridiculous situation, welcome to the club.  Democrats have become pretty united in urging Northam to step down.  Besides his state party leaders, the national party, and a number of prominent federal-level politicians, the Virginia NAACP is also calling for him to resign.  The reports from Saturday indicate that he doesn’t plan to, but it seems doubtful he can stick around much longer, given that he has no way to govern effectively at this point.

At the presser, Northam’s wife did appear to save him from – well, from whatever is worse than the situation he’s in already.  A reporter demanded, courageously and incisively, confronting power with truth, whether Northam can still moonwalk.  The governor gave a half-chuckle and seemed about to bust a move behind the lectern, but Virginia’s first lady – in the grand tradition of Southern ladyhood – intervened quietly but firmly to nip that incipient embarrassment in the bud.

Said Northam, sheepishly: “Inappropriate circumstances” – that’s what Mrs. Northam was telling him under her breath.

As J. Christian Adams observes at PJ Media, a Republican politician would have resigned five times by now.

Maybe Republicans need to stop resigning at the drop of a hat.  On the other hand, meanwhile, the Democrats do need Northam to resign.

The fate of political agendas and governance in Virginia isn’t really the issue there, although I’m sure it matters to some partisans.

The top reason for needing Northam to resign is that if he doesn’t, there will be no way to hound Trump’s next Supreme Court nominee out of contention, short of catching the nominee over a dead body with a bloody knife in his or her hand.

It will also, of course, be that much harder to make a persuasive case that Trump himself should resign – or be impeached, or at least be relentlessly afflicted by a quasi-impeachment campaign waged against his family, his associates, and members of his government, in the House of Representatives.

The Democrats couldn’t manufacture even the credible appearance of real, compromising circumstances for Brett Kavanaugh.  But they’re likely to try again for the next confirmation round.  And they won’t stop trying to turn the Mueller investigation into impeachment fodder, however little it actually implicates Trump.

In Kavanaugh’s situation, there was never any material evidence for what he was accused of.  In Northam’s case, the evidence is as material as can be.  It’s right there.  There’s a photo.  It’s on the yearbook page labeled “Ralph Shearer Northam” – a page we’ve seen an image of directly from a yearbook copy, straight out of the school library, and vouched for by the Virginian-Pilot newspaper.  We can assume it’s not photoshopped or otherwise doctored.

The evidence appears to be bolstered, rather than weakened, by other data points like Northam’s nickname at VMI – “Coonman” – and his confession that he did wear black-face for a dance contest.

Northam’s doing everything he can think of to raise doubts about the obvious implications of the actual evidence.  Give an ear to him or not, as you choose; the point remains that he’s fighting material evidence, not unproven allegations and innuendo.  That makes his situation and Brett Kavanaugh’s different.

But in terms of drive-by impressionism, and things being sort of vaguely about old yearbook entries and incoherent memories, the common elements can be leveraged to make a superficial case look meaningful for propaganda purposes.

The Democratic messaging strategists count on people not thinking these points through logically.  If they want any hope of success with an allegation and innuendo campaign against the next Supreme Court nominee – or against Trump – they need Northam to shape public expectations by resigning.

My guess is that he will.  He’s got nowhere to go with the governorship at this point.  His political career has no future.  He gave it his best shot on Saturday, and doesn’t seem to have convinced anyone.

There’s no need to be vengeful about socially unacceptable things he did more than 30 years ago; mercy is in order, for him to retire from the limelight and find a new footing in balance and peace.  I don’t think the public has any thirst for blood here.  I do think the public will tire of Northam, per se, quickly.

(Don’t be daunted by the length of the video. Northam doesn’t enter and speak until after the NBC intro at the 52:00 minute mark. Just skip to that point.)