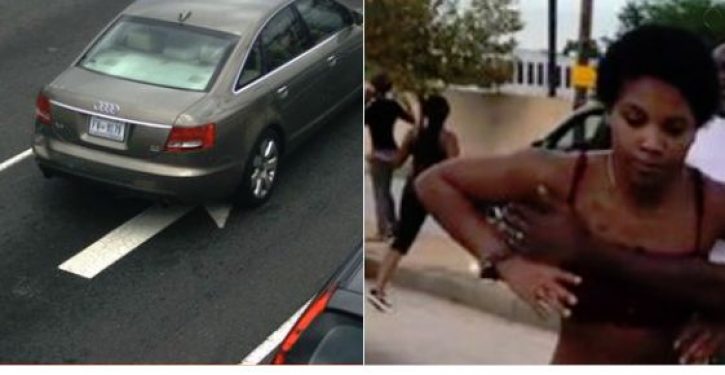 This could be the most prolonged episode of road rage on record. The incident began, according to WABC, when a the driver of an Audi driver barreling through the streets of Washington, D.C., last Thursday dangerously passed a Greyhound bus on the right, sideswiping a parked car in the process.

When the bus driver admonished her, “You’re a crazy driver, you need to get off the road,” he had no idea just  how crazy. The Miami Herald reports that the driver of the Audi popped open her trunk, pulled out a car jack, and went to work smashing the driver’s-side window and side-view mirror of the bus.

The bus driver exited his vehicle and took up a position in front of the woman’s car with an eye evidently to preventing her from fleeing the scene before the police arrived. But the woman was undaunted. She put her car in gear and drove headlong into the driver, sending him up onto the hood of her car.

Eventually the woman managed to speed off with the bus driver still on the hood. As she accelerated, he tumbled off onto the road.

D.C. Metropolitan Police have identified the Audi driver as Mariana Silver, 20, and revealed that she’s wanted on several charges. Police should have no difficulty tracking her down since the entire incident has been captured on video, including her license number.

There is no word on the condition of the bus driver.