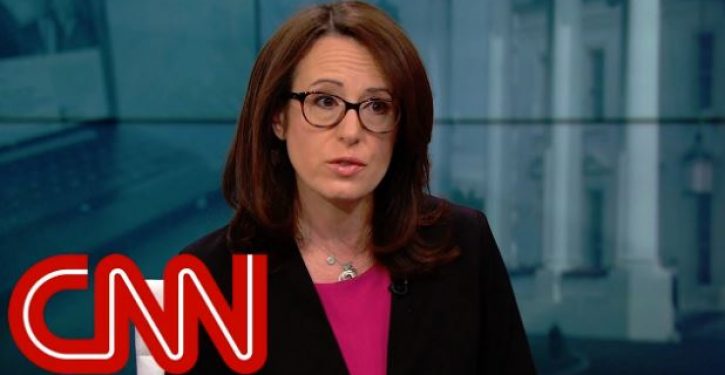 Yesterday must have been a slow news day at The New York Times. That would explain as well as anything why the paper ran a vapid story in its “A” section with the tantalizing headline “Trump Used Racial Slur During ‘Celebrity Apprentice,’ Former White House Aide Says.”

Other anti-Trump news outlets investigated the claim made by the Times and came to the same conclusion — that it is all sizzle and no steak. NPR went so far as to interview the “former aide,” who turns out to be Trump’s old reality TV buddy Omarosa Manigault Newman, before dismissing the story as fiction.

But Times writer Maggie Haberman has trouble just telling her readers outright that Omarosa’s book is a house of cards. She even spells out the n-word in the first paragraph, giving hope to fellow TDS sufferers that she’s got career-ending dirt on the man they love to hate.

President Trump frequently used the word “nigger” while he was the host of the reality television show “Celebrity Apprentice,” and there are tapes that can confirm it, according to a new memoir by one of Mr. Trump’s former White House advisers, Omarosa Manigault Newman.

Then she spoils it all by saying something truthful in the very next paragraph:

The claims, based on hearsay, are among the more explosive and unverified ones that Ms. Manigault Newman makes in the book, “Unhinged.” It was first reported by the British newspaper The Guardian, which had an early copy.

Haberman spends the remaining 1,100 words of her 1,200-word treatise building up readers’ hopes that she’s got something on the president, then dashing them. Here’s paragraph 8:

Frank Luntz, the veteran Republican pollster whom Ms. Manigault Newman says was believed to have told people he heard Mr. Trump utter the epithet, posted on Twitter to deny that had happened and to point out that he had not been contacted by the author.

Later she opens another promising lead:

Tom Arnold, the actor, claimed in late 2016 to have acquired outtakes from the show featuring Mr. Trump denigrating women and minorities. A former producer posted on Twitter that such things existed. Mark Burnett, the producer of the show and a Trump supporter, resisted pressure to release any such footage.

But then she follows with this:

Former campaign aides said that Ms. Manigault Newman was involved in efforts then to sort out whether such tapes existed, and that she never claimed knowledge of them at that time.

In July, Times publisher A.G. Sulzberger sat down with Trump at a private White House meeting to set the record straight on fake news, which he said is “untrue and harmful.” If Sulzberger really believes that, maybe he should arrange a sit-down next with his reporters and order them to stop peddling rumors as fact.

Ocasio-Cortez is now endorsing other candidates? This should be entertaining!
Next Post
The difference between Charlottesville last year and D.C. this year