Despite Tom Perez’s mystifying statement that Democratic Socialist Alexandra Ocasio-Cortez is the “future of the Democratic party,” most party members avoid talking about her, much less championing her qualifications. They likely shudder when they learn she will be making another cable TV appearance to share one or another of her hare-brained campaign pitches.

Although Ocasio-Cortez herself likely faces an uphill battle in the general election to fill the seat in New York’s 14th congressional district occupied for the last ten terms by Joe Crowley, on Friday she made her first political endorsement. So whom did she endorse?

America, if you don’t already know about Ilhan Omar (@IlhanMN), it’s time to know & support her.

Her election is THIS Tuesday.

Ocasio-Cortez doesn’t specify what Omar should be pushed into, though voters can decide for themselves after acquainting themselves with this candidate for Congress.

As City Journal notes, Omar “became an overnight sensation in Minnesota politics” following “[h]er primary victory over 22-term incumbent Phyllis Kahn.” She is 33 years old, and immigrant from Somalia, and — perhaps most notably — she is virulently anti-Israel: 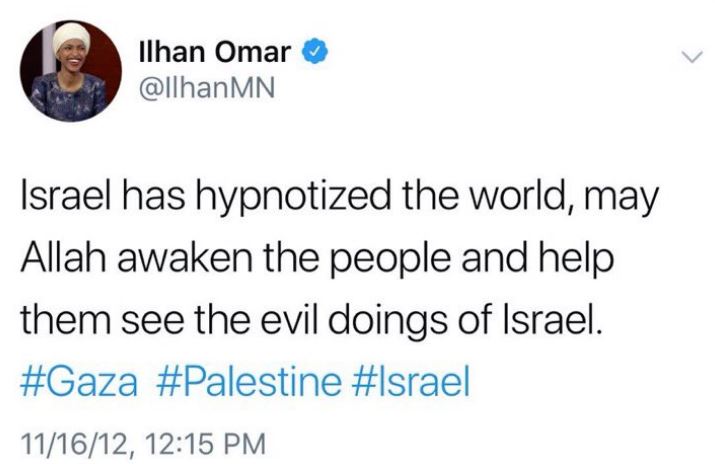 No wonder she is one Ocasio-Cortez’s heroes. According to reports she celebrated her upset victory over Crowley in the company of a rabid anti-Semite.

She is also working to elect Abdul El-Sayed as Michigan’s first Muslim governor, undaunted by his ties to the Muslim Brotherhood.