A heavily redacted but still somewhat informative copy of the FISA application documents on Carter Page was released on Saturday, and as numerous outlets are reporting, it shows that the Steele dossier was the major component of the justification.

A close reading of the files reveals how subtle clues were incorporated in the initial application to increase the appearance that Christopher Steele’s work product was something we have reason to believe it really wasn’t.

We know today that Steele’s information was compiled in response to a commission from the Hillary Clinton campaign and the Democratic National Committee, to do opposition research for the purpose of hanging dirt on Donald Trump.

The FISA application makes it clear that that was not the picture of Steele’s information presented to the FISA court.

We are left to assume one of two things.  Either the FBI knew, but did not inform the court, that Source #1’s (Steele’s) information was commissioned for a fee by “Candidate #1’s” (Donald Trump’s) political opponent (Hillary Clinton) in the 2016 general election; and that Source #1’s information was also the basis of the news stories referred to in the application.

Or the FBI didn’t know those facts – in which case, the failure to meet Bureau standards should get people fired, should invalidate the FISA approvals, should be wirebrushed in a congressional probe, and would be the basis for a justifiable lawsuit by Carter Page, and anyone else whose communications were vacuumed up in the FISA dragnet.

The subtle-clue deployment – structuring the FISA application to make it appear that Christopher Steele’s information was “intelligence,” with the same standing as intelligence obtained through FBI field work or national technical means – is largely known to the public by now.  But seeing the application makes clear that the clues were, in fact, used to obscure the reality of the case.  It’s how those clues are placed that makes me more certain this was intentional.

The little clues are these.

1. The overall classification of the original FISA application is “Top Secret NOFORN (no foreign dissemination).”  However, virtually the entire document is classified Secret or below.  This can be observed by reviewing the paragraph markings, almost all of which are either S//NF (“Secret NOFORN”) or (U) (“Unclassified”). 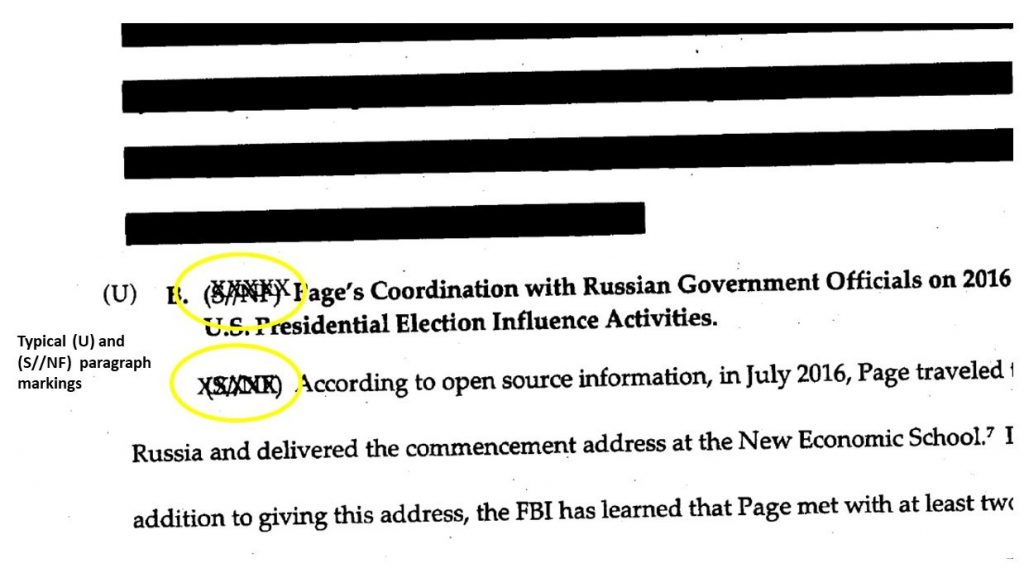 The only Top Secret paragraphs are the ones about Christopher Steele, or Source #1.  The information about Steele starts in footnote 8 at the bottom of page 15.  It continues through page 16, which consists entirely of the paragraphs of footnote 8, and through one final paragraph of footnote 8 on page 17.

On page 18, a paragraph with information from Source #1 is classified TS//NF (“Top Secret NOFORN”), and footnote 11, beneath it, has the same classification.

A series of fully redacted paragraphs and footnotes 14 through 17 take us from page 19 to the middle of page 22 – all classified TS//NF.  (One paragraph in this block has mostly visible text.) 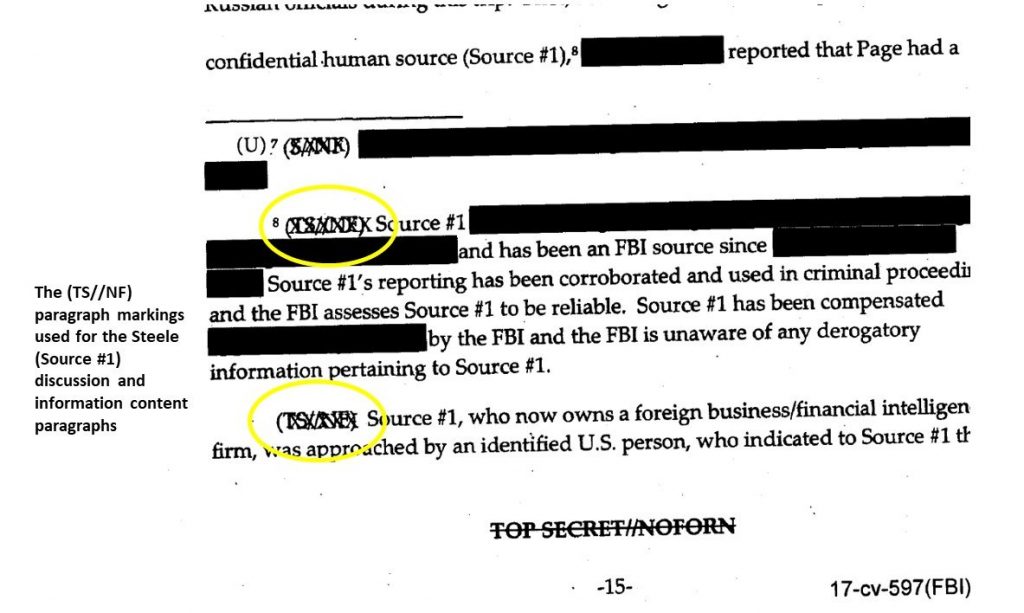 This block of text also contains material from a human intelligence source, as indicated by the TS//NF markings, and we can assume with high confidence that it is Source #1.  The FBI and Justice Department have every motivation to reveal it now if there was another source.  They’ve been challenged repeatedly to demonstrate that they had something other than the Steele dossier to base their FISA application on; the reasons to do that are compelling.  And in a sea of comprehensive redaction, they would be jeopardizing nothing by letting the words “Source #2” be visible.

But that’s not what they did.  They blanked out entire paragraphs classified TS//NF (which in context means this was human-source “intelligence”), and those paragraphs are a continuation of the case the application is making about Carter Page’s contacts with Russians.

Read through the visible portions of this block of text, from page 15 to page 22.  It’s the information from the Steele dossier.

In other words, what they’ve done here is take the Steele dossier information that we know was being shopped around to the press as early as September 2016 (and probably before), and slap the classification Top Secret NOFORN on it.  The purpose, rather obviously, is to underscore Steele’s status as a trusted FBI informant – even though the information itself, by the time the FISA application was forwarded, was known to at least half a dozen news organizations, and who knows how many Democratic operatives in the DNC and the Hillary campaign.

Again, the overall classification of the document is Top Secret NOFORN.  In the context of this intelligence problem, that means human-source “intelligence” is the most highly classified type of information present in the application.  And the supposed “TS//NF” information, as marked, was the dossier content being shopped by Glenn Simpson and Christopher Steele all over Washington.

2. Besides decorating Source #1 and his information with TS//NF markings, the dossier uses coy wording about Steele’s contract with Glenn Simpson and Fusion GPS (the “identified U.S. person” first mentioned in footnote 8 on page 15), to create the appearance that Steele the informant, and his contracted work product for a political candidate, were separable as regards bona fides and credibility.

There has already been a lot of public discussion of the FISA application’s obfuscation about who commissioned the dossier.  There’s no need to rehash all of that here.  But we need to understand the effect.

The application goes out of its way to refrain from connecting dots that legitimately required connection.  That much we had already understood.  But it also frames some of the dots – Steele’s information – as if they were acquired on the same basis as Top Secret human-source intelligence that had to be protected with classification and special handling, because sources and methods might be exposed.  The implication is specific: that sources and methods in which the U.S. government has a stake are involved.

That was frankly duplicitous.  It would lead the reader to put a specific construction on this paragraph of footnote 8 on page 16: 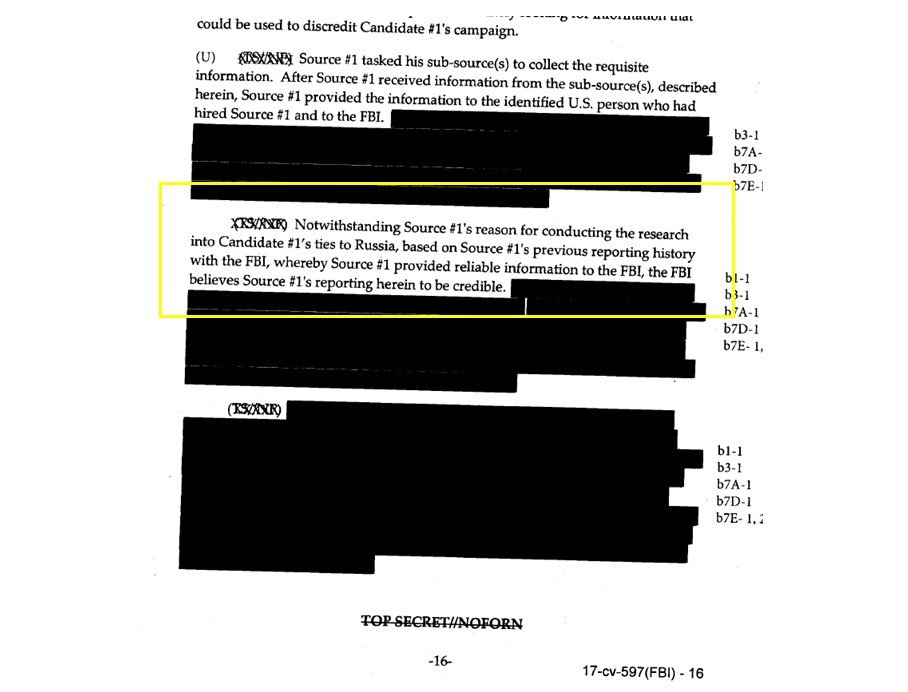 The reader’s mind would think of what came from Source #1 as having been initially sought out, perhaps, due to the source’s work contract with the “identified U.S person” (Fusion GPS) – but having the quality, with the FBI’s stamp on it, of Top Secret U.S. national intelligence.

And that would be a false impression.

I know perfectly well that information can often be classified for the purposes of internal handling, regardless of where it came from or how it started out.  But that’s how I also know a con job when I see one.

This was a situation in which the FBI should have made it clear to the court, rather than making it obscure, that a FISA application was being based on material that started out with no classification markings; that did not come as institutionally vetted “intelligence,” with the inherent need for a prescribed level of protection; and that could, in fact, be retailed anywhere, to anyone, by the owners of that information – who were a media business (Fusion GPS) and two of the biggest political organizations in the United States, the DNC and the Hillary Clinton campaign.

3. The third and final point about clues from the structure of the application is that the application clearly presents the news reports it refers to as if they are independent, unrelated sources of information.  The document implies that the reports separately corroborate or amplify the information from Source #1.

Yet we know that Source #1 – Steele – was the source for those news reports.  Whether he communicated directly with the reporters or not, his compiled dossier was the source of the content in those reports.

The FBI was obligated to know that too.  And it had every reason to, given that it severed its cooperation with Steele at the end of September 2016 because of the article by Yahoo’s Michael Isikoff (referred to in the FISA application as “the September 23rd News Article”), which made it obvious that Steele had been a source for Isikoff.

Assuming both the obligation to know, and the knowledge, the FBI was also obligated to make what it knew clear to the court.  The FISA application, forwarded in the weeks after the Isikoff article, doesn’t do so.

It can’t be credibly argued that maybe the FISA application clarifies that point for the court in the redacted passages.  It would be ridiculous and unnecessary to redact verbiage of that kind.  Indeed, redacting it, if it were there, would leave us now with a gratuitously false impression about what the FISA application gave the judge to work with.

What we can conclude with confidence is that the FISA application didn’t make it clear, even behind the black tape, that Source #1 was the only source for the substance in the warrant request. The allegation of contacts between Carter Page and senior Russian officials in mid-2016 came from Steele.  Steele’s reporting was dressed up in the FISA submission with some flashing red TS//NFs, but the reporting nuggets had already been dragged through newsrooms, Democratic inboxes, and Harry Reid’s brain, like grimy dollars through a trailer park, before they ever got to the FISA judge. 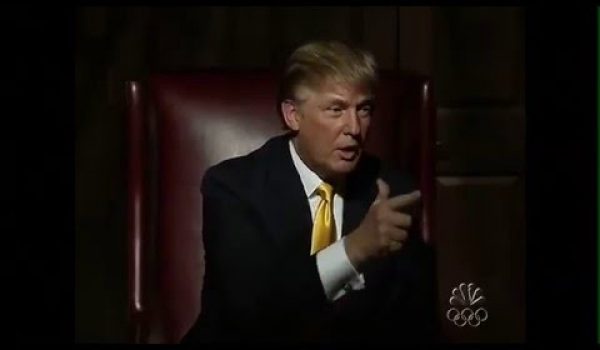