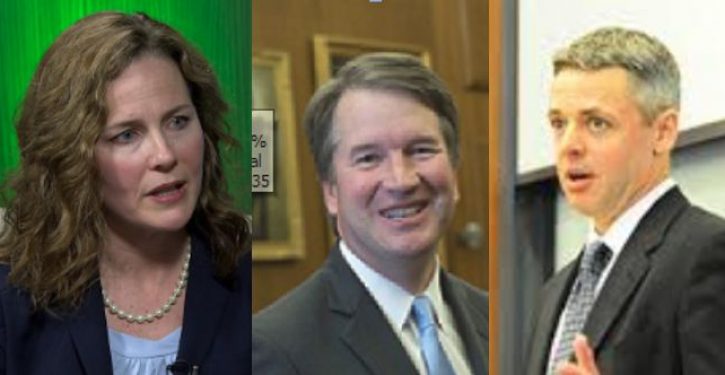 Though a growing number of interest groups and congressional hardliners have expressed doubts about Kavanaugh, the judge has a long history of conservative legal positions that is reflected in his near 300 opinions on the U.S. Court of Appeals for the D.C. Circuit, according to friends of the judge and commentators who closely follow his work.

In recent days, the conservative writer Ann Coulter has emerged as one of Kavanaugh’s most passionate surrogates outside the administration. Coulter told The Daily Caller News Foundation that his work in the George W. Bush White House — frequently invoked by detractors — should not overshadow his “extensive and stellar” record, particularly in the immigration area.

“It’s absurd to call Kavanaugh a ‘Bushie’ as the idiots are doing on Twitter,” she said. “Where else would a very smart conservative lawyer work, if he cared about the country? Bush was president — he was the only game in town. Kavanaugh is rock solid on immigration and everything else and he has a track record on the bench to prove it.”

Coulter, who does not know the judge personally but is familiar with his record, added that other respected conservative jurists like the late Justice Antonin Scalia and Justice Samuel Alito worked for presidents perceived as liberal. Scalia worked in the administrations of Presidents Richard Nixon and Gerald R. Ford, while Alito was a federal prosecutor under President Jimmy Carter. His critics, she suggested, are looking for a judge who “rants like a polemicist.”

One longtime Kavanaugh associate told TheDCNF that movement conservatives have admired Kavanaugh since the right-wing legal establishment, today a dominant force in Washington, was little more than a lonely cadre of Scalia proteges.

Gibson, Dunn & Crutcher partner Miguel Estrada echoed those sentiments, telling Ed Whelan at National Review that attacks on Kavanaugh’s record are “deranged.” Estrada was once seen as a future Republican Supreme Court nominee, until Senate Democrats blocked his nomination for the D.C. Circuit during the George W. Bush administration.

Whelan, a prominent conservative legal commentator who has been disseminating information about all candidates under consideration, published a comprehensive review of the judge’s record in a series of July 4 posts.

Like Estrada, Senate Democrats met Kavanaugh’s 2003 nomination for the D.C. Circuit with intense resistance. His nomination sputtered in the Senate for three years, and he was not confirmed until 2006. During his confirmation hearing, Democratic Sen. Dick Durbin of Illinois styled Kavanaugh an ideologue who did the bidding of powerful conservative interests.

“As I look through all of the different issues that you have been involved in as an attorney in public service and the private sector, it seems that you are the Zelig or Forrest Gump of Republican politics,” Durbin said. “You show up at every scene of the crime. You are somehow or another deeply involved.”

Kavanaugh has served on the D.C. Circuit for over a decade. As such, he has heard a wide range of cases on statutory and constitutional issues, leaving little mystery as to where he stands on particular questions, as well as his preferred methods of interpreting law.

“He’s someone who is recognized by the justices of the Supreme Court as a very smart lawyer, a brilliant judge, and a leading thinker in areas of constitutional law,” she told TheDCNF.

The judge’s writings in religious liberty cases, for example, strike a clearly conservative note. He wrote a concurring opinion in 2010 defending the invocation of God during the presidential oath of office and at the start of the Supreme Court’s public sessions.

In the course of his thorough survey of tradition and precedent, he approvingly cited two other opinions written on the subject by Judges Edith Brown Clement and William Pryor, who are both considered solid conservatives.

He also dissented from an opinion upholding Obamacare’s contraception mandate, arguing the policy imposes a substantial burden on religious believers who object to financing or providing birth control.

One of the judge’s most famous dissents came in a 2008 challenge to the constitutionality of a Securities and Exchange Commission (SEC) panel called the Public Company Accounting and Oversight Board (PCAOB). Members of the PCAOB had stronger protections against termination than comparable agency officials, prompting conservative critics to argue the panel was a roving, unaccountable fourth branch of government.

Two judges on a three-judge panel hearing the case at the D.C. Circuit found for the PCAOB and defended its constitutionality. Kavanaugh dissented, arguing the structure of the panel unlawfully restricts the president’s power to appoint and remove executive branch officers. His opinion begins explicitly with an originalist analysis — which runs another eight pages — and explains how the board threatens the separation of powers.

On review at the Supreme Court, a five-justice majority composed of the Court’s conservatives reversed the D.C. Circuit’s decision. The ruling repeatedly quotes Kavanaugh’s opinion, as well as his comments at oral argument. Some legal commentators have suggested the high court would not have taken the case but for his sweeping dissent.

Kavanaugh’s PCAOB dissent came as many conservative jurists were beginning to express concerns about the authority of the sprawling network of federal agencies and commissions that make up the so-called “administrative state.” These legal thinkers have reason to admire Kavanaugh, as he has also written or joined opinions that seek to confine the power of the Environmental Protection Agency (EPA) and the Consumer Financial Protection Bureau (CFPB).

Somewhat frustrated by persistent doubts on the right about Kavanaugh, the conservative pro-Trump pundit Matt Schlapp insisted that the judge will not follow other Republican appointees who tracked to the left after their appointment.

“Kavanaugh is not another Roberts; he’s another Scalia, Alito, or Gorsuch,” he said. “In fact, on issues such as reining in the administrative state, he is arguably more conservative than even those three highly regarded justices.”

Severino agreed, telling TheDCNF that the entire field of candidates is composed of serious jurists around whom conservatives should close ranks.

“What’s so great here is we have an incredible bench, there’s so many wonderful options,” she said. “I’m confident that whoever of these finalists the president picks, people will get behind them because they’re all such excellent choices.”

One of the four Chicago teens who tortured disabled man sentenced: Media silent
Next Post
Supreme Court has ruled repeatedly that foreign nationals have no due process rights here