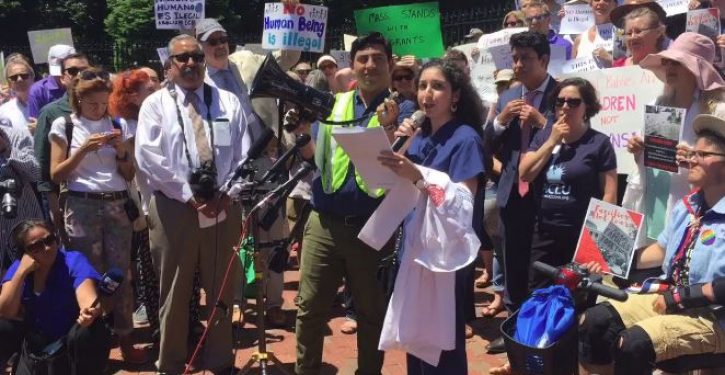 Democrats are heavily protesting Republican offices and members of President Donald Trump’s administration over their immigration policies, but are repeatedly unwilling to do anything about the root causes that drive so many illegally across American borders.

Multiple Republicans in the House and Senate crafted proposals in June to deal with family separation. They even went a step further, attempting to address both the causes and consequences of illegal immigration, like the lack of judicial infrastructure to deal with the massive waves of migrants entering the country illegally. (RELATED: Trump Executive Action To Stop Family Separation)

Trump and the White House spent the entirety of a week in June receiving criticism for the decision to enforce what is called a “zero tolerance” immigration policy, which resulted in the separation of children from their parents.

The policy was to separate children from their parents (or from the adult who brought them) who illegally immigrated to the U.S., arguing it is necessary to deter future individuals from crossing the border outside the proper, legal channels. (RELATED: Cornyn Talks Immigration, Family Unity)

“Anyone who believes this Republican Congress is capable of addressing this issue is kidding themselves,” Senate Minority Leader Chuck Schumer said in a statement June 19. “The president can end this crisis with the flick of his pen, and he needs to do so now.”

The president did exactly what Schumer and Democrats asked of his administration June 20, signing an executive order to start detaining families who immigrated illegally together while they undergo prosecution. Now, any Republican proposal that addresses more than family separation is falling flat among Democrats, who seem determined to go back to the previous open borders policy of catch and release.

One of the more prominent Republican proposals comes from GOP Sens. Ted Cruz of Texas, Ron Johnson of Wisconsin, and John Kennedy of Louisiana.

The Republican senators are calling for the creation of 750 new immigration judges, new facilities to keep families together while they are being held, and an expedited pathway for those who immigrate illegally to see a judge and legally apply for asylum. If they are not granted asylum within a 14-day period after their hearing, the immigrant will be deported back to their home country.

Democrats are only putting forth bills that deal with child separation, but fail to fix the lack of immigration judges or create a legal, expedited pathway for immigrants to seek asylum–a talking point many Democrats claim is the primary reason immigrants are fleeing to the U.S.

Democratic Sen. Dianne Feinstein of California has a bill that ends the family separation policy, but does not give the government greater resources to detain and adjudicate immigration cases. All Democratic and Independent senators support Feinstein’s proposal.

In the House, a large coalition of Democrats put forth a bill that would end the separation of children from their parents, “expect for extraordinary circumstances.” The bill, like Feinstein’s, does not offer solutions to the immigration court backlog.

Democrats have a chance to both stop the separation policy and address other immigration problems this week when House lawmakers vote on Republican leadership’s compromise bill, which deals with both issues.

While the opportunity is there for Democrats, the rhetoric from Democratic leadership does not suggest that the bill will pass, further questioning how much they want to protect children — let alone fix immigration.

The leadership bill is expected to fail rather dramatically, with a vote likely coming as soon as Tuesday. Democrats and conservative members are expected to shoot it down, but for different reasons. Leadership might add in a conservative ask — E-verify — that will ostracize moderate Republicans and assuredly scare off Democrats. On the other hand, without it, conservatives will kill the bill.

Leadership is toying to put forth a standalone proposal, like Republicans Dave Brat and Mark Meadows, to address the family separation issue. How Democrats would vote on that potential bill remains to be seen.