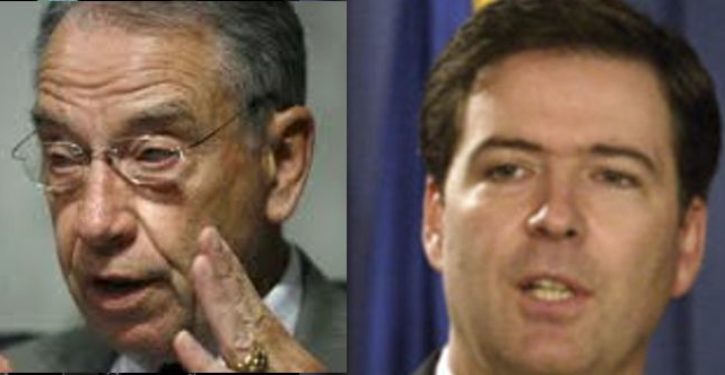 Sen. Chuck Grassley, chairman of the Senate Judiciary Committee, says he is trying to get to the bottom of “apparent contradictions” in former FBI Director James Comey’s claims about former national security adviser Michael Flynn.

Comey told a Senate Judiciary panel in a March 15, 2017 interview that the FBI agents who interviewed Flynn did not believe he intentionally lied about his contacts with Russian Ambassador Sergey Kislyak in December 2016.

Comey also “led us to believe” that the Justice Department “was unlikely to prosecute [Flynn] for false statements” made during his Jan. 24, 2017 interview with FBI agents, Grassley wrote Friday in a letter to FBI Director Christopher Wray and Deputy Attorney General Rod Rosenstein.

Comey’s remarks conflict with what he has claimed in recent interviews for his book tour, said Grassley. To get to the bottom of the matter, the Republican is asking Wray and Rosenstein to provide FBI notes taken during both the Comey and Flynn interviews.

In an April 26 interview with Fox News’s Bret Baier, Comey denied telling lawmakers that the FBI agents who interviewed Flynn did not believe that Flynn was intentionally lying.

“No,” said Comey, adding that “someone misunderstood something I said. I didn’t believe that and didn’t say that.”

Comey said in a March 15, 2017 interview that the FBI agents who interviewed Flynn did not detect physical signs of deception, the House Intelligence Committee said in a report released earlier this month.

The report also quoted former Deputy Director Andrew McCabe, who testified that “the two people who interviewed [Flynn] didn’t think he was lying.”

Flynn, a retired lieutenant general, pleaded guilty on Dec. 1 to lying during the FBI interview. Some observers have questioned whether Flynn accepted the guilty plea in order to avoid charges on other matters. Flynn’s defenders say he was unfairly targeted by the FBI and forced into accepting a plea deal in order to force his cooperation against President Donald Trump.

Donald Trump is no longer the worst person in government
Next Post
She didn’t see it coming: Psychic arrested for $800,000 fraud