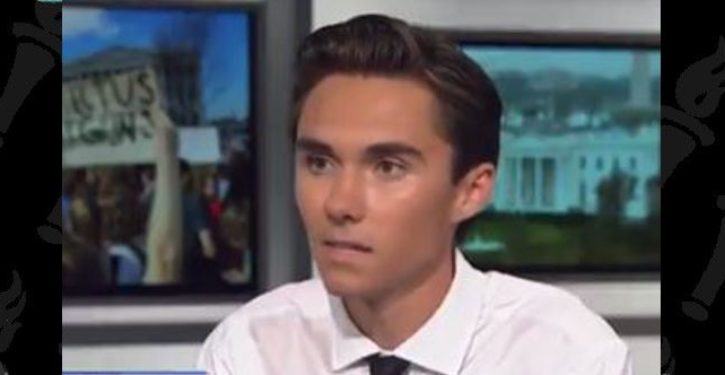 Yesterday, David Hogg took time out from his important work at the March for Our Lives to speak with reporters about his views on guns, which he believes are being misrepresented by Fox News and other non-liberal media outlets.

Wow! Let that highlighted tidbit sink in for a minute. It sounds a little like a “A good friend me of mine is a _____” statement.

Now back to Hogg’s comment, which went on to take a page out of the Obama handbook, with its call for “common sense gun reform.”

I’m trying to push for common sense gun reform and mental illness reform so we can make sure that these individuals that have a criminal background, that are mentally unstable, and have a history of domestic violence are no longer able to get a gun. I don’t understand what’s so hard to understand about this. We simply want to save lives and democracy, please stand with us.

Let’s take it on faith that Hogg genuinely supports the Second Amendment, despite have called the nation’s leading Second Amendment advocacy group, the NRA, “pathetic f*ckers that want to keep killing our children.”

Let’s instead examine his arguments, beginning with his desire to “make sure that individuals with a criminal background are no longer able to get a gun.” It’s an admirable goal, though far from easy to attain. The Bureau of Justice Statistics reports that more than three quarters of guns used in crimes are stolen:

The agency has further determined that people imprisoned for firearm crimes got their firearms mostly via theft, the black market, and/or family members or friends. Less than 1% get guns at gun shows.

The Bureau of Alcohol, Tobacco, Firearms and Explosives estimates, moreover, that nearly half of illegally trafficked firearms originate with “straw purchasers” — people who pass background checks to buy firearms for criminals. The radicalized husband and wife who shot up their workplace in San Bernardino in 2015, killing 14 coworkers, obtained the firearms they used from a straw purchaser who passed a background check.

I could go on, but the larger point is that David Hogg traffics in vague generalities and pipe dreams parroted from anti-gun adults that have no bearing on the issue currently dividing the nation. If Hogg and his fellow marchers are sincere about wanting to prevent further incidences of gun violence like the one that killed 17 of his classmates, they are advised to turn their crusade toward the real culprits — in the case of Parkland, local and federal authorities who dropped the ball — and toward real solutions for making schools safer.