We knew to expect a certain lack of gravitas in the “March for Our Lives” on 24 March, after seeing Parkland survivor-activist David Hogg triggered by the decree (which Howard Portnoy recorded earlier) that students at Marjory Stoneman Douglas High School would carry only clear backpacks, to prevent smuggling things into the school.

Young Mr. Hogg seemed shocked at the idea that a whole lot of innocent people should be punished with a draconian security crackdown for what one criminal did.

But that, of course, is exactly his argument about what is erroneously called “gun control”: that millions of law-abiding citizens should have their rights eroded and put at risk because of what one criminal did.  So things were bound to go downhill from there.

And go downhill they did.  I observed earlier today that the big, highly orchestrated turnout in the Washington, D.C. march on Saturday, with the “fake homemade” signs, the many aging leftists on-hand, and the pre-packaged chants and talking points, was clearly an Astro Turf operation.

(Oh, and the numerous charter buses.)

If adult activists who live for a revival of the “Generation of ‘68” got hold of a group of teenagers and steered them around to perform well-worn rituals of activism, this is what it would look like.

So when it looks like that, and thousands of the adult activists are there to “rally behind” the kids, who otherwise would have no hope of prompt organization on such a massive scale, it’s kind of a no-brainer that such steering is what’s going on.

There’s a sense in which this isn’t even about the kids.  I hate to spend too much time focusing on them.  I hope most of them move on from a phase of untutored mimicry pretty quickly, and have good and fulfilling lives.

Students chant "enough is enough" and hold up signs with slogans like "our ballots will stop bullets" at a #MarchForOurLives rally in Parkland, Florida: https://t.co/Z5fjRS6KZb pic.twitter.com/WXt4Krr2Ey

But the heart of this post’s thesis is the question whether what’s happening is serious enough to take more seriously than that, or whether it’s really just a shallow fad that won’t mean much a few months from now.

And that point isn’t about the topic of guns.  It’s about the creepy, thematic gestures of radical leftism with which today’s activities were infused.

Wearing the Cuban flag while attacking the Bill of Rights is not a good look. pic.twitter.com/w8uIsGm3Nz

There’s no escaping the reality that this was a vast, manufactured “rally,” which was supported by sympathetic insta-rallies not just in the United States but overseas (because gun laws in the U.S. weigh heavy on the minds of people in Tokyo and Paris?), attended by catechistic incantations about a radical-left agenda list, as well as demonization of the most anodyne of mainstream personalities, and punctuated by the iconic fist-raising gestures of Communism, or international socialism.

This #MarchForOurLives attacks Marco Rubio for his Catholic faith and draws a blood cross on his forehead. pic.twitter.com/4zrhlkQreN

When David Hogg hoisted his fist in the air, Twitter erupted with comparisons to Adolf Hitler and the Nazi salute.  Although the hand position isn’t correct, that’s not necessarily an invalid comparison, in terms of what these kids are being used for and encouraged to represent.  (Nazism is not the opposite of Communism; it’s a variant of Communism.  Both of them are about centralized collectivization and economic and social coercion.  Both of them require jackboots and homicidal gang-rule.)  But it does miss the mark somewhat.

Other tweeps came in with a more accurate reference: to the raised-fist gesture of Communism (see here and here as well, especially for the long thread running to the “Generation ’68” radicals like the Black Panthers, Weathermen, SDS etc).

So glad the children have taken to the streets to lead us forward. Love, Mao. pic.twitter.com/Ia2lp8XhFR

I wonder what comes after the "march." Pray. pic.twitter.com/dGaWL36RZz

A lot of people raise their fists when making political points, including relatively harmless mainstream politicians.  But that’s not what Hogg’s gesture was, as is obvious from his stance and expression.

Again, he’s a kid; the point here is not to interpret him, so much as to interpret the context in which he’s been given a stage to perpetrate this freighted gesture from.

It’s clear that there is an orchestrated, highly organized effort to take control of the public debate on gun rights.  There’s a concerted effort to shift it away from facts and understanding, and toward sentiment and hysteria.

When questioned they knew absolutely nothing

Check out this vid for a taste. More coming!

Going by what we’ve seen in the last several weeks, there is thematic collusion from some of the media (CNN and MSNBC seem to be the most in the tank).  There’s rapid-reaction organization from pre-existing advocacy groups.  The school administrations – including teachers’ unions – don’t just sympathize; they participate in the organization and leadership.

There is international organization too, which is very informative.  It’s not actually a benign, spontaneous thing for foreigners to rally against Americans’ constitutional rights from thousands of miles away.  There is no scenario in which this doesn’t indicate extraordinary organization, with a larger and very troubling political agenda.

One reason I lay out this case is that I’m not sure how I feel about it.  Even though it has the organizational hallmarks characteristic of international socialist radicalism 50-100 years ago, maybe it’s paper-thin.  Maybe we’d be justified in complacency about it.  Maybe it can’t hurt us, and there’s no need to worry about what it could turn into.

That’s certainly how one side of this Twitter debate (Seth Mandel’s, appearing in a thread) seems to see it.

Khmer Rouge?  (That was Kurt Schlichter’s initial volley.)  Come on, dude.  Over the top.  Get a grip.  Right?

But there was a time when it would have been ridiculous to see the Khmer Rouge in the very people who eventually became the Khmer Rouge.  The ghastly cadre of that horrific episode in Southeast Asian history were once a lot of people’s teenage kids.

It wasn’t so very many years before they became ruthless, cold-blooded killers – or other people’s kids became Che’s and Castro’s guerrillas, or Mao’s army or Lenin’s Chekists or Bolsheviks – that they were idealistic young people with some vestiges of conscience and compunction.

Does it do Americans more good to ignore the similarities of the sudden, highly-organized anti-gun push to the features and ritual cues of international socialism, than it would do to take those similarities seriously?

Saying we should ignore it may make sense if we are sure that America is too strong, unified, and centered to be torn apart by a movement that doesn’t care about us at all, but instead is dedicated to destroying the peace and safety of ordinary people everywhere.  That’s always been the project of international socialist radicalism.

We don’t need to see the Khmer Rouge where there’s no Khmer Rouge.  But it’s not foolish to be concerned that we can see a proto-Khmer Rouge potentially emerging, from the conditions that created the original.

The Khmer Rouge, the Nazis, the Bolsheviks, the acolytes of Mao, Castro, Che, and a dozen or more others, who slaughtered more than 100 million people in the last century – all were cut from the same cloth.  In our zeal to avoid overreacting, we mustn’t forget that the main distinguishing feature of the Khmer Rouge was not its mind-numbing bloodthirst, but its lack of deceptive political domestication.

The Khmer Rouge didn’t make hand-waves at political conventionality.  But the hand-waves made by Stalin and Mao and Hitler were never evidence that any of them lacked the exact same breathtaking, homicidal viciousness that characterized the Khmer Rouge.

If it isn’t time to worry, it may be time to at least pay attention.  There are a lot of mostly apolitical Americans who need to acknowledge, at the very least, that mass-crowd demagoguery deploying teenage orators to attack our constitutional rights isn’t “politics as usual” in the USA.  The passionately irrational attack on the Second Amendment is as wrong and bizarre, in its way, as neo-Nazis waving tiki torches and shouting anti-Semitic slogans in Charlottesville.

Meanwhile, there’s no getting away from the fact that radical left rallies always leave a big mess for someone else to clean up.

Been waiting for this RT @RobProvince: And as always happens at these things…. https://t.co/ie4ClJlBsd

The next time you protest, please put bullseyes on the back of your lousy signs, that way the hardworking people who clean them up, have something to use for target practice.

Far-left activists are using the #MarchForOurLives rally to push for gun control, arguing guns make people less safe… while they are surrounded by the National Guard and police who are carrying guns. pic.twitter.com/XBrmbkTFdN

Finally, there’s this, from (believe it or not) New York Magazine.

There Is No ‘Epidemic of Mass School Shootings’

Granted, it’s deployed to counter gun-rights arguments about the need to protect schools with armed personnel.  But that actually enhances its value as a fact-finding document.  There is no epidemic of mass school shootings.  Neither side of the argument gets to base its proposals on that false premise. 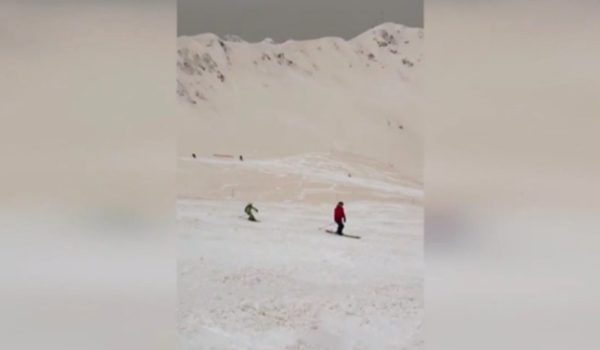 Weird ‘orange snow’ phenomenon in Southern Russia, Southeast Europe
Next Post
Biden walks back comment about beating up Trump: ‘I shouldn’t have said that’