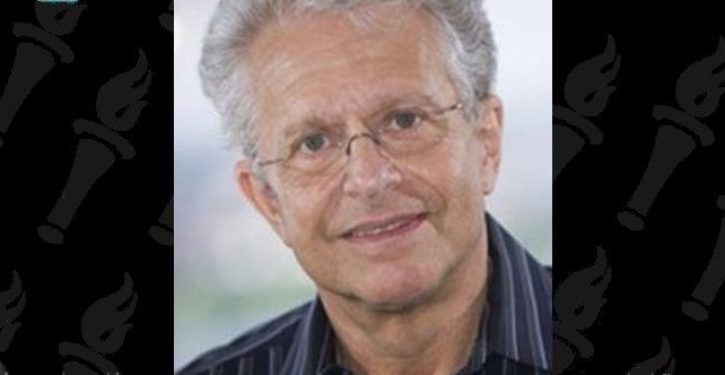 On Sunday, a Russian jet carrying 71 people crashed shortly after taking off from Moscow. A day later, Harvard law professor and virulent Trump hater Laurence Tribe tweeted out the rumor that among the casualties was Sergei Millian, a Belarus-born businessman and friend of George Papadopoulis “who had emailed Kushner and is said to be behind one of the most salacious claims in the dossier on Trump’s involvement with Russia.”

The rumor turned out to be totally unfounded, a likelihood Tribe himself was aware of when he posted his tweet, which ended with the caveat “Probably just coincidence.”

After learning the truth, Tribe scrubbed the tweet, replacing it with a lukewarm mea culpa for having jumped the gun:

THIS MAY HAVE BEEN A DIFFERENT SERGEI, not an uncommon Russian name. So far, the only sources confirming that Millian was among the dead are ones I can’t vouch for. So maybe not even a coincidence — just a case of misreporting. Sorry if I rang a false alarm, @RepSwalwell. https://t.co/y8C3tpfEWe

Nevertheless, the tweet remains “out there,” if only in screen cap form, which has been sufficient to keep alive the wishful thinking that Team Trump had “offed” a potential witness against the president. 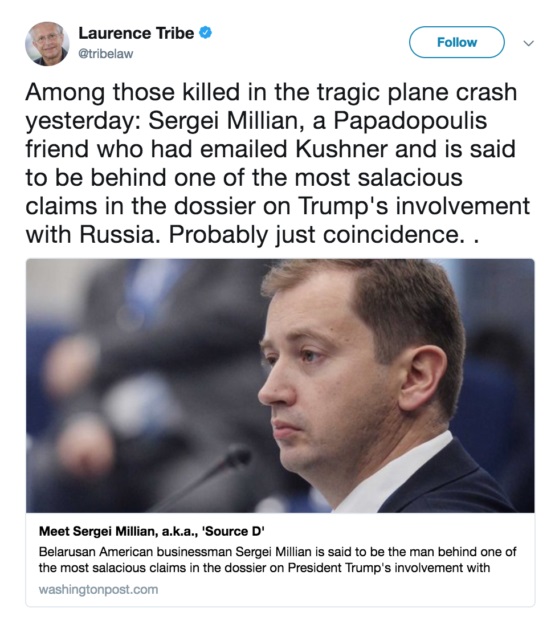 Smoke: Among those [killed] in the tragic plane crash yesterday

Truth: Among those murdered in the tragic plane crash yesterday

As Chuck Ross of The Daily Caller noted:

Tribe’s tweet linked to a Washington Post article from last March identifying Millian as “Source D” and “Source E” in the infamous dossier, which was written by former British spy Christopher Steele. According to the WaPo report and others, Millian was the source behind some of the most salacious claims in the dossier, including that the Kremlin is blackmailing President Donald Trump and that members of the Trump campaign colluded with Russians.

Trump and members of his campaign have denied the allegations. Millian has claimed he was not a source for the dossier, but he has avoided addressing whether he may have inadvertently provided information that wound up in Steele’s report.