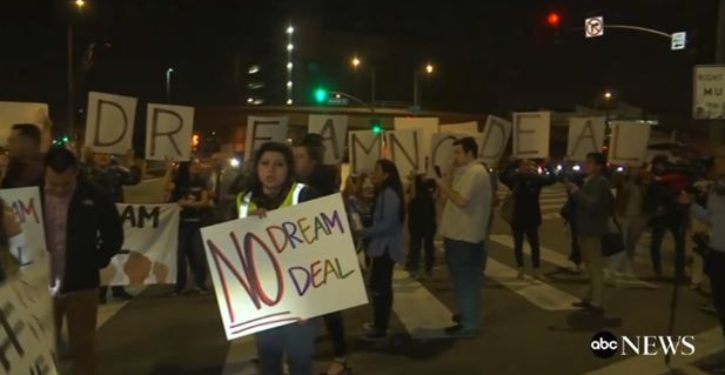 Senate Democrats own the ‘Schumer Shutdown.’ This is the behavior of obstructionist losers, not legislators. When Democrats start paying our armed forces and first responders we will reopen negotiations on immigration reform.

Sen. Chuck Schumer, who led the negotiations for his party, argued:

Every American knows the Republican Party controls the White House, the Senate, the House. It’s their job to keep the government open. There is no one — no one — who deserves the blame for the position we find ourselves in more than President Trump.

It’s a fatuous argument but not quite as silly as the reason that the government underwent a partial shutdown at 12:16 a.m., and that was that the two sides couldn’t agree on legislation that will extend protections for the 800,000 illegal immigrants known euphemistically as “DREAMers.”

The tag was first applied by the Obama administration in an attempt to justify blanket amnesty to illegals brought here as children by their parents. These “bright, ambitious youths,” according to the Democratic handbook, were here to live the American dream. It’s hard to defend that highflown rhetoric when you consider that 4% of DREAMers finish college and 24% are “functionally illiterate.”

Despite Schumer’s insistence that his hands were tied, we’ve been down this road before. In 2013 a ranking Democrat argued that shutting down the government over amnesty would lead to “governmental chaos.” His name? Chuck Schumer.

In 2013 Chuck Schumer argued it would be ‘governmental chaos’ to shut down government over amnesty for illegals.
#Hypocrite #DACA #ReleaseTheMemo