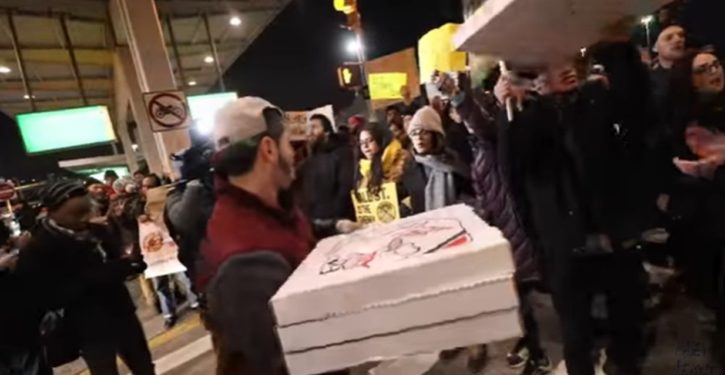 Protesters at JFK airport get free pizza during first round of Trump travel restrictions in 2017. (Image: Screen grab of YouTube video)

Blue states involved in litigation against the Trump administration’s travel ban have consistently blocked public records requests about the amount of taxpayer funds being spent in the ongoing legal fight against the travel ban.

The Immigration Reform Law Institute filed numerous Freedom of Information Act Requests back in March to the state attorneys general in Hawaii and numerous other states, who’ve been fighting the travel ban since February.

The response has been little more than obstruction.

Hawaii, which is fighting the third rendition of the travel ban unveiled Sept. 24, has been more than reticent to release figures on the costs of carrying on litigation for months. IRLI submitted a FOIA on email communication between attorneys in the Hawaii v. Trump case for words like “racist,” “Muslim ban” and “Trump.” In response, the Hawaii AG office denied the public interest fee waiver request and charged $28,396.30 to complete the document search. An appeal of the costs was unsuccessful.

Additionally, IRLI requested litigation costs for the case. The AG office stated in response to this query that the info had to be withheld because of “attorney-client/work product privilege,” which is an odd response for taxpayer cost requests.

Minnesota and New York, two more blue states, have been non-responsive to similar FOIA requests about how much taxpayers are having to front the legal fight and attorney-hours spent on the project. Even the latter would be sufficient for at least a rough estimate, as average billing rates can be applied to the hours to come up with a figure. Minnesota’s release of figures did not include attorney hours or costs per hour.

Massachusetts released only two cost items relating what’s called “pro hac vice,” which refers to showing up at a court in a jurisdiction where one does not have a license to practice. The costs for pro hac vice in the case of Massachusetts amounted to $231 and $462, but the state otherwise refused to release third-party counsel costs, public relations costs, hours of workers in the attorney general’s office, and so on.

Oregon has agreed to release some information on the subject of costs, though it’s not nearly as involved as the other states in fighting the travel ban. Oregon only joined the Washington v. Trump case as an intervenor. Even with the status of intervenor, up until May 31st, Oregon generated 303 hours in work for state attorneys and $52,972.50 in costs.

It’s unclear when the litigation will end. After an attorney for Hawaii informed the U.S. Supreme Court that the state planned to challenge the Trump administration’s third travel ban, a federal judge ruled Friday that Hawaii could make the case that it should be allowed to present this challenge. This third rendition of the travel ban excludes Sudan, adds Chad and North Korea to the list and also bans numerous officials from Venezuela.

Neither the Hawaii nor New York AG offices responded to requests for comment. After being contacted by The Daily Caller News Foundation, the Massachusetts AG office insisted it would follow up on the FOIA request after essentially ignoring it for months. A spokesman for the Minnesota AG’s office stated that the office had already provided the requested information. In fact, it had not.