A Ted Nugent radio interview with Newsmax’s “Joe Pags” – Joe Pagliarulo – is being duly reported across the leftosphere.  The interview on the call-in show took place on Friday, 30 March.  (Video below.)

Media Matters has a transcript of the portion it wants to highlight.  In it, Nugent calls out the activist teens as liars for their overheated language about the NRA and its members.

TED NUGENT: The level of ignorance goes beyond stupidity. Again, the National Rifle Association are a bunch of American families who have a voice to stand up for our God-given Constitutionally-guaranteed right to keep and bear arms. We have no blood on our hands. No NRA member have ever been involved in any mass shootings at all, in fact the National Rifle Association is the lone organization that has taught firearm safety in schools, and for law enforcement, and for military, and for children’s organizations and family organizations around the country for 100 years. So once again, this poor pathetic individual is a liar.

JOE PAGLIARULO (HOST): I’m going to pick it up from there. And then she continues and then the David Hogg kid who everybody’s talking about lately jumps in.

[Emma Gonzalez and Dovid Hogg are heard from a CNN interview with Alisyn Camerota on 30 March.]

NUGENT: The dumbing down of America is manifested in the culture deprivation of our academia that have taught these kids the lies, media that have prodded and encouraged and provided these kids lies. I really feel sorry for them because it’s not only ignorant and dangerously stupid, but it’s soulless. To attack the good law-abiding families of America when well known predictable murderers commit these horrors is deep in the category of soulless. These poor children, I’m afraid to say this and it hurts me to say this, but the evidence is irrefutable, they have no soul.

I might not put it in exactly those words, but Nugent has a point here.  The Parkland teen activists do have souls, but their souls have been tragically seared at a very young age with a lifetime’s worth of vicious faux “morality” crammed down their throats, by the modern West’s official culture and its self-appointed leadership.

These kids are taught to literally bully other people by attacking them in political terms for their supposed attitudes and shortcomings.  The kids have been taught to preemptively misinterpret other people according to an ideological propaganda checklist.  They’ve been taught that it is virtuous to label others as haters and racists.  Forget specific reasons why anyone is labeled; that doesn’t even matter anymore.  Reasons can be made up on the spot.  The labeling itself is the act of virtue.

The kids have been taught that to be “safe” themselves, they’re not only allowed to treat other human beings like demons who need to be exterminated – they’re required to.

They’ve been taught that the world will never be an acceptable, livable place unless the demons are exorcised – and that those demons are their fellow men.  They’ve been taught that they must suffer under loads of anxiety, if not on their own behalf then on behalf of others, until the happy day when no one is left who might be moved to identify someone else as a hater, racist, or phobic villain.

Since that happy day will never arrive, these kids are slaves for life.  I would not consign anyone to that torment.

Yet it has been done mostly by allusion, implication, and syllogism.  Sure, the simplistic propaganda checklist never changes – which makes it easier to get everyone chanting it mindlessly – but parsing it for meaning is a fool’s errand.  To get to this checklist, you have to accept a lot of premises that are rarely spoken aloud.

One of the most important exposed premises is the blunt statement from high-profile personages in the last few weeks that the Second Amendment should, indeed, be repealed.  Seeing even a former Supreme Court justice argue for it is a reminder of how long others have been making the case (going back to at least here, as well).

The “repeal 2A” position means that America herself must be repealed, and that the freedom of men and women to constitute and limit their government – instead of being held helplessly at risk by it, without recourse – is not a right at all.  It means that the fundamental concept of America is invalid at its core.

This is being said, aloud, right to our faces.

I think the left-wing sites will continue to pick and choose what they quote from Ted Nugent.  I notice that they’re reporting on some of what he said, but not all.  It’s almost as if they really want to get the discussion going only among their own faithful – and especially those who can be counted on to simply echo indignant responses without looking into it further.  (Be honest, people: you know we have those folks on the right too.)

So, to whet your appetite for listening to the whole clip of Nugent’s interview with Joe Pags, I’m going to transcribe a bit more.  Everyone should read this, or listen to it.

NUGENT: The National Rifle Association…is the most important family organization in the world, Joe, because in spite of the history of tyranny and dictatorship that our Founding Fathers fought, and outlined in the Constitution and Bill of Rights how to never let it happen again, the National Rifle Association are families who believe that our gift of life is not only worth protecting, but we have a self-evident-truth based right and duty to have self-defense, and that the king doesn’t have the exclusive right to keep and bear arms.

It is so simple that anyone who contests it is the manifestation of the dumbing down of America.

This next passage is a particularly good, pointed summary of facts that matter to the debate about guns themselves.  I think you’ll find it a little gem.

We would love to help the children reduce and even eliminate violence and danger and insecurity in their lives, in their school, on our streets.  But if your entire anti-gun agenda is based on 100% lies and falsehoods – remember, Joe, if you really examine every word out of the leftist media’s mouth about gun control, if you listen to every word these children say, everything they say about guns is a lie.

When you call these guns [i.e., AR-15s] “weapons of war,” it’s a lie.  No one’s ever gone to war, around the world today, with a semiautomatic weapon.

When you call them “high-powered” weapons, when the .223 [the typical AR-15 round] is such a feeble round that it’s illegal to hunt deer with in 30-some states… when you talk about high-capacity magazines, when the cadence and the rate of fire would have been more deadly with a single shot shotgun, because no one resisted, Joe*… so, the lies from the left, the lies from these poor, mushy-brained children who have been fed lies, and parrot the lies – they are actually committing spiritual suicide, because everything they recommend will cause more death and mayhem.

Leaving all of law-abiding America in the same defenseless condition as the Parkland students on 14 February 2018 would, indeed, cause more death and mayhem.  We could talk about that all day.  But I think Ted Nugent has said his piece well enough to just leave it right there.

* A shotgun can hit more people with the shot from a single shell, but can’t fire as fast as a semiautomatic rifle (which fires bullets, and typically hits a maximum of one person per round).  Thus, resistance against the shooter matters to how effective either weapon will be.

So do caliber, and size and type of round.  In the Stoneman Douglas shooting, where the victims weren’t armed for any resistance, Nikolas Cruz could actually have been more effective with a moderately powerful shotgun, even though it wouldn’t chamber rounds automatically like a semiautomatic rifle.

Nugent’s series of points here lays out why the media-brokered debate on weapons is important, but is so frequently misleading.  The debate almost always focuses on the wrong fact(s) for a given point.  “Semiautomatic” is not a voodoo terror; it’s a simple description that has meaning only in context.  A little Beretta 9mm is a semiautomatic, and will always fire faster than a shotgun, as long as it’s got more than one round in it.  Whether the 9mm or the shotgun is superior depends entirely on the context, and the features of the individual weapon. 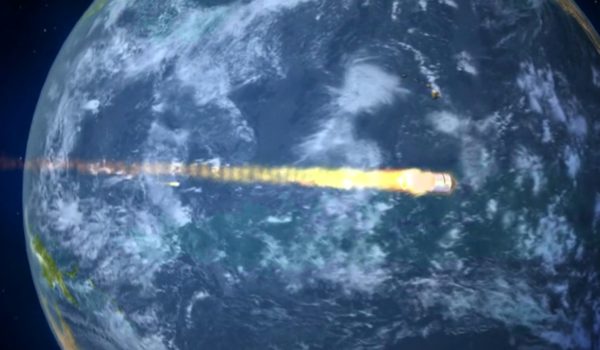 Somewhere around Earth’s midsection, parts of Chinese space station to crash on Sunday
Next Post
An entertaining reminder of how anti-factual Politifact’s ‘fact checks’ often are