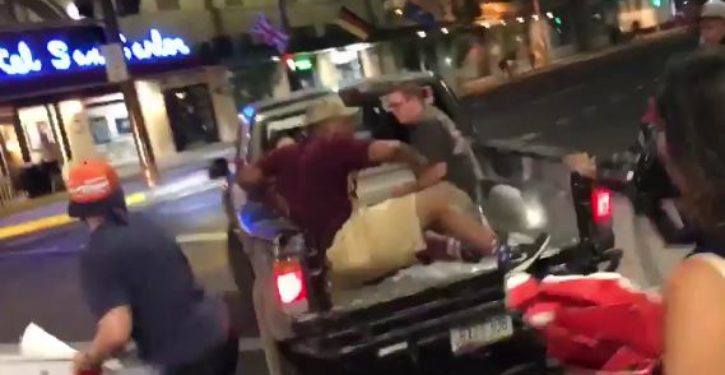 The man in the maroon shirt was sucker punched by the 'peace activist' at the extreme left. (Image via Twitter)

The protesters who gathered outside President Trump’s rally in Phoenix last night “began fighting and throwing rocks and bottles at police.” That’s what Sgt. Jonathan Howard of the Phoenix Police Department told CNN. Other sources note that the harassed the crowds who had turned out in support of the president, threatening some and physically assaulting others.

When police ordered the protesters to disperse, some hung around chanting, “No Trump! No KKK! No racist U.S.A!” while others held signs, one reading “Make racists scared again.” After threats of arrest fell on deaf ears, the cops resorted tear gas. When that proved ineffective, they turned to rubber bullets. In the end, three of the anti-Trumpers were arrested.

All in all, it was an ugly scene. If a term had to be employed that would fairly characterize the protest group, many of whom were aligned with Antifa, many possibilities come to mind, including miscreants, lawbreakers, and anarchists. That isn’t the term, however, that Reuters used in a tweet this morning. Instead, it called them peace activists:

That was also the term Washington Post preferred for an article on the mayhem. Apparently, neither news organization noticed the protesters attacking Trump supporters as they left the rally. Among them was a black supporter of the president who was punched in the face.

One violent clash between Trump supporters and protesters was caught on video by New York Times correspondent Simon Romero, showing a pickup truck packed with MAGA-hat-wearers arguing with protesters surrounding the truck.

In the video, one of the MAGA-hatters, a black man, restrains his friend following a shouting match with protesters, and the friend eventually gets into the driver’s seat of the truck while the black man hops in the bed with two others.

The driver appears to turn his wheels and attempt to drive into protesters on the sidewalk, causing a commotion. He then continues on the road slowly, until one sign-bearing protester charges up to the bed of the truck and punches the black man repeatedly in the face.

Ugly scene in downtown Phoenix. Watch til the end pic.twitter.com/K516TbufIw

President Trump criticized the media in a speech that lasted well over an hour:

[T]he fake media, they make up stories. They have no sources in many cases. They say ‘a source says’ — there is no such thing. But they don’t report the facts. Just like they don’t want to report that I spoke out forcefully against hatred, bigotry and violence and strongly condemned the neo-Nazis, the White Supremacists, and the KKK.

President Trump’s remarks come as he continues to take fire for his response to Charlottesville, saying that “both sides” there were to blame. Last night’s development fails to support that contention. Only one side deserves blame for the chaos and violence that enveloped an area of Phoenix. That “side” is the one the mainstream media today are calling “peace activists.”

This report, by Will Ricciardella, was cross posted by arrangement with the Daily Caller News Foundation. 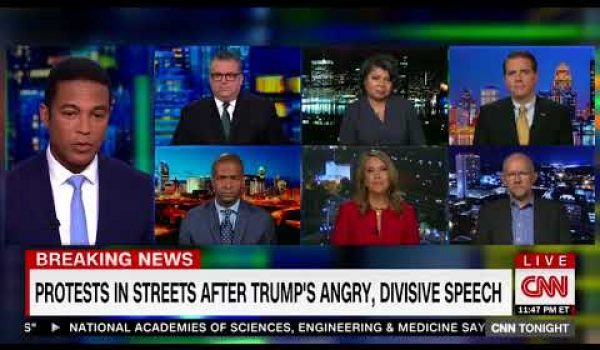